Massimo Gurnari’s bold etching works have developed slowly, his skills learnt from observing respected friends and colleagues over the years. Having set up a “private studio” in the corner of his house when just starting out, Gurnari now works at DOA Tattoo Factory, set up by close friend Mirko Sata. In 2015 Gurnari set up Faceless Brand clothing line with his wife and has been exhibiting his paintings as a professional artist since 2005.

What is your name, birthplace, and year of birth?
Hello, my name is Massimo Gurnari. I was born in 1981 in Milan, Italy. I live and work in Milan.

Where did you grow up? Please describe your upbringing and sociocultural background.
I grew up in a bad neighborhood of Milan. Because of that, I didn’t get out of the house a lot when I was younger. I spent a lot of time in the house drawing and painting. In the early 90’s, I mainly went out to go to the Muretto; a place near Duomo in Milan where people went to breakdance and listen to rap music. There, I saw the first photos of writer, NOCE. In 1995, I started doing graffiti and joined the VMD70 crew.

Where do you currently work? Prior to that, where have you worked?
Currently I’m working at the DOA Tattoo Factory, opened by my friend Mirko Sata (@mirkosata). Prior to that, I’ve worked at the studio of a long-time buddy, Original’s Tattoo Studio by Cristiano Entics (@tribale90).

What inspired you to learn tattooing, and what did you initially learn how to tattoo?
I got my first tattoo age 17. As I started getting more tattoos from different artists, I’ve became friends with a lot of them. Later on, when I decided to be a tattooer, they have become my mentors. One of them was Pepe (@pepe_electricstattooing). He was one of the first people to suggest I should start tattooing after he saw my paintings. Once I decided to become a tattooer, every time I got tattooed I would watch, and learn techniques from my tattooer friends, whom I respect dearly. I spent time at historic tattoo shops, like TATTOO SHOP by Daniele Carlotti (@thetattooshopmilano). Besides watching and learning, I copied and practiced tracing traditional tattoos. One of the first traditional tattoos I ever tattooed was on my friend Zuno (@zunoelectric).

Were you trained through a formal apprenticeship? Describe the circumstances of learning.
I didn’t do an apprenticeship in the formal way. I spent hundreds of hours at tattoo studios watching and learning. Though I wasn’t an official apprentice, I learned a lot just by being there. I then set up a private tattoo shop inside my house and invited tattooers from outside Milan as a guest tattooer. A lot of tattooers came as guests and no one was doing this “private tattoo shop at home” in Milan at the time. It was unique and super fun!

Have you previously studied art in an institutional setting? If so, what level of training did you reach and in what disciplines?
I took art in high school and then attended the Academy of Fine Arts in Milan. After graduating, I became a professional painter in 2005, collaborating with galleries and exhibiting in Milan as well as the USA, China, and Europe.

Did that training help as you learned the mechanics of tattooing?
Technically, the training I had at the Academy didn’t help me while I was learning to be a tattooer. But, to be creative, have ideas in your mind and express them using your hands is similar. I consider training important because without it, there is no base. But for me, the content of work is more important than technique.

How did you develop your style? How would you describe it? What are your influences?
I have come to my “black line” style slowly. I was always attracted to graphic signs, bold black lines in art, even though that’s now how I paint! For tattooing, I like outlines, almost removing colors from inside. This process has led me to do bold and fine line black tattoos. My style of tattooing has lot of similarities to engraving and I do get a lot of influences from medieval drawing and paintings.

Why do you think you are drawn to engraving so prevalently?
I think it comes from my love for the "line" work in my tattooing. That’s why I’m drawn to the sign of the pencil on white paper, like deep black ink of an engraving on paper. In painting, I use a lot of colors, but when I draw, I like the hardness and the simplicity of the lines.

What do you like to listen to while you tattoo? Where does this influence come from?
I listen to all genres of music while I work, from rap to 70’s disco, rock to classic. I like them all, up until the year 2000. It changes, depending on my mood of the day.

Do you have any hobbies outside of tattooing?
One of my big hobbies and interests besides tattooing is weight lifting. I’m pretty much at the gym six days a week and I train before I go into the studio. I’ve been going to the gym since I was 15 years old and I was even a personal trainer for a while. Training has always calmed me down and it is a great way to reflect and meditate.

What inspires you generally?
My sources of inspiration come purely from the history of art and the art if engraving. Also from sculpture and painting. I love Albrecht Dürer for my tattoo work, more than others, but I love to also have references from painters including Warhol to De Chirico, Neo Rauch, Schnabel, Hopper, and many others.

Are any other forms of media, traditional or digital, important to your work?
Absolutely yes. I’ve never felt limited by media. I’ve always used anything that’s suitable to express what I have in my mind. For paintings, tattooing, clothing, and everything!

Is traveling important to you? If so, where do you usually travel? Do you have any interesting experiences abroad that you can share?
Traveling is very important to me. It has been especially since I got married–my wife and I travel to Los Angeles and Tokyo every year since that’s where my wife is from. Other than that, we travel every chance we get, short or long, close or far!

Ideally, how would you like to see tattooing evolve? How do you think it will evolve realistically?
Ideally, I would like to see tattoo artists prepare their designs with culture and with taste in the craft. Don’t copy and keep producing clones of clones. Realistically, I see the situation getting worse and worse–the climate of mediocrity feeds itself in a vicious circle.


You can find more of Massimo Gurnari’s tattoos on Instagram (@massimogurnari), more of his paintings at (@massimo_gurnari), and the clothing brand he co-owns with his wife ( 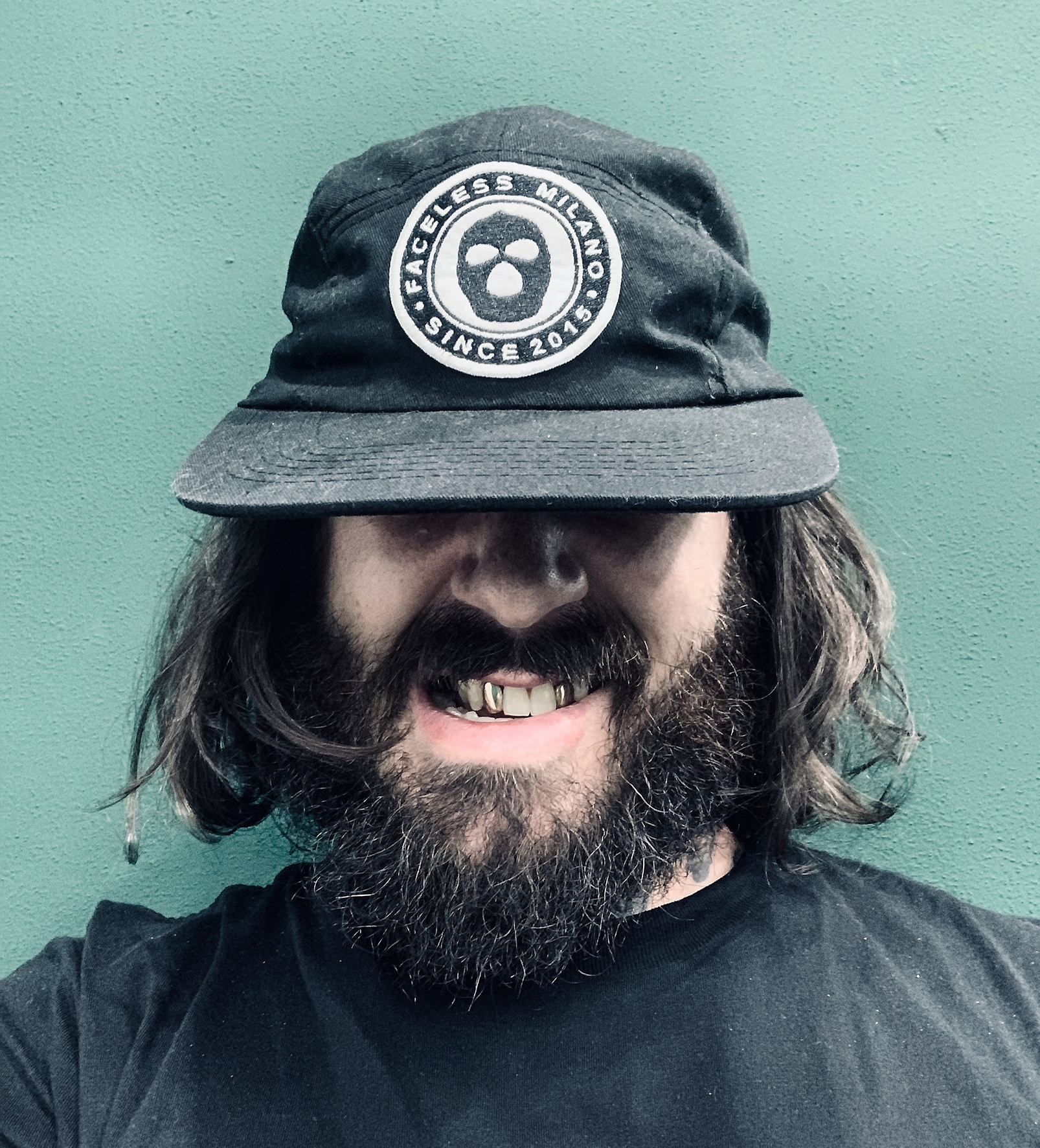 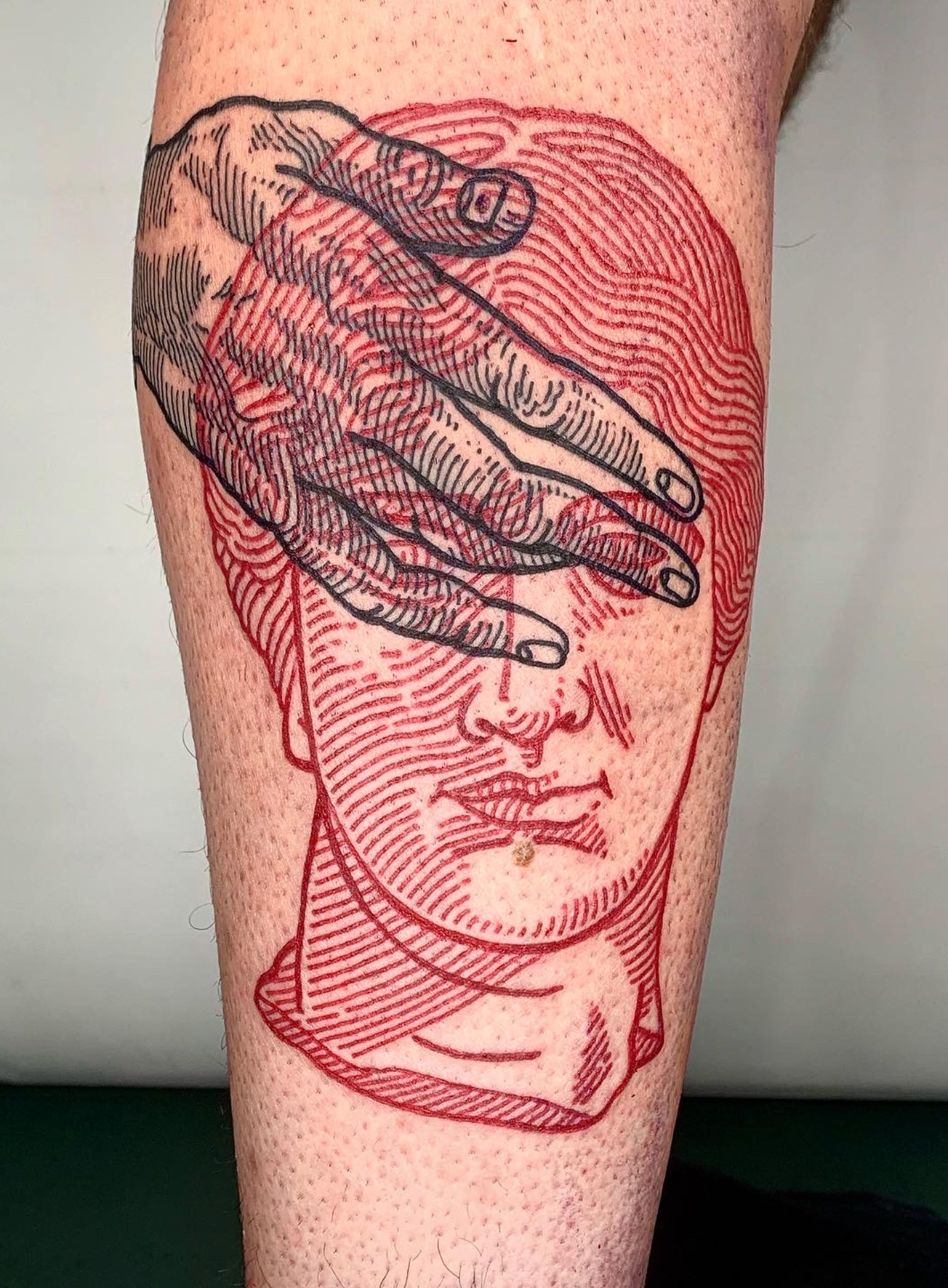 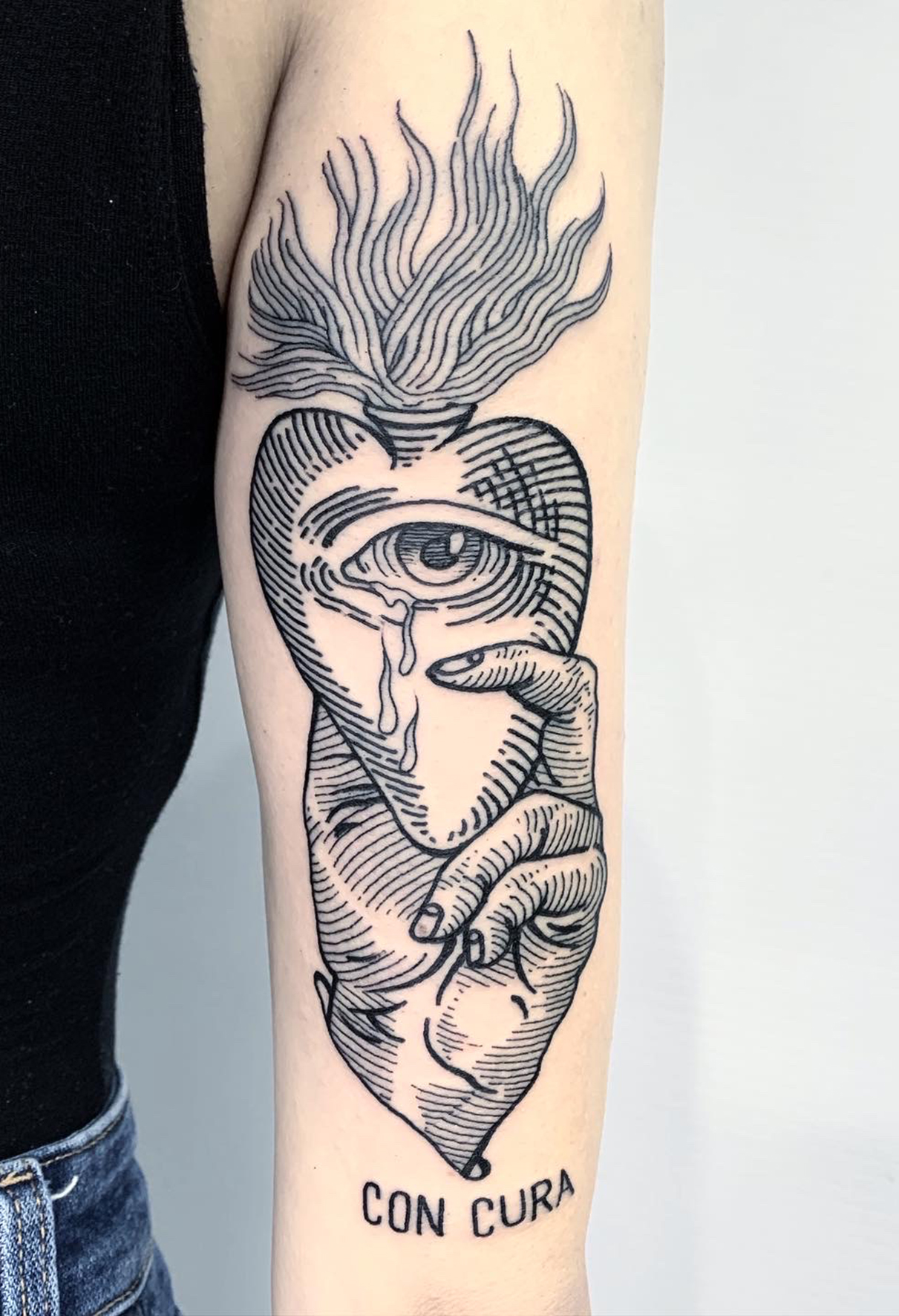 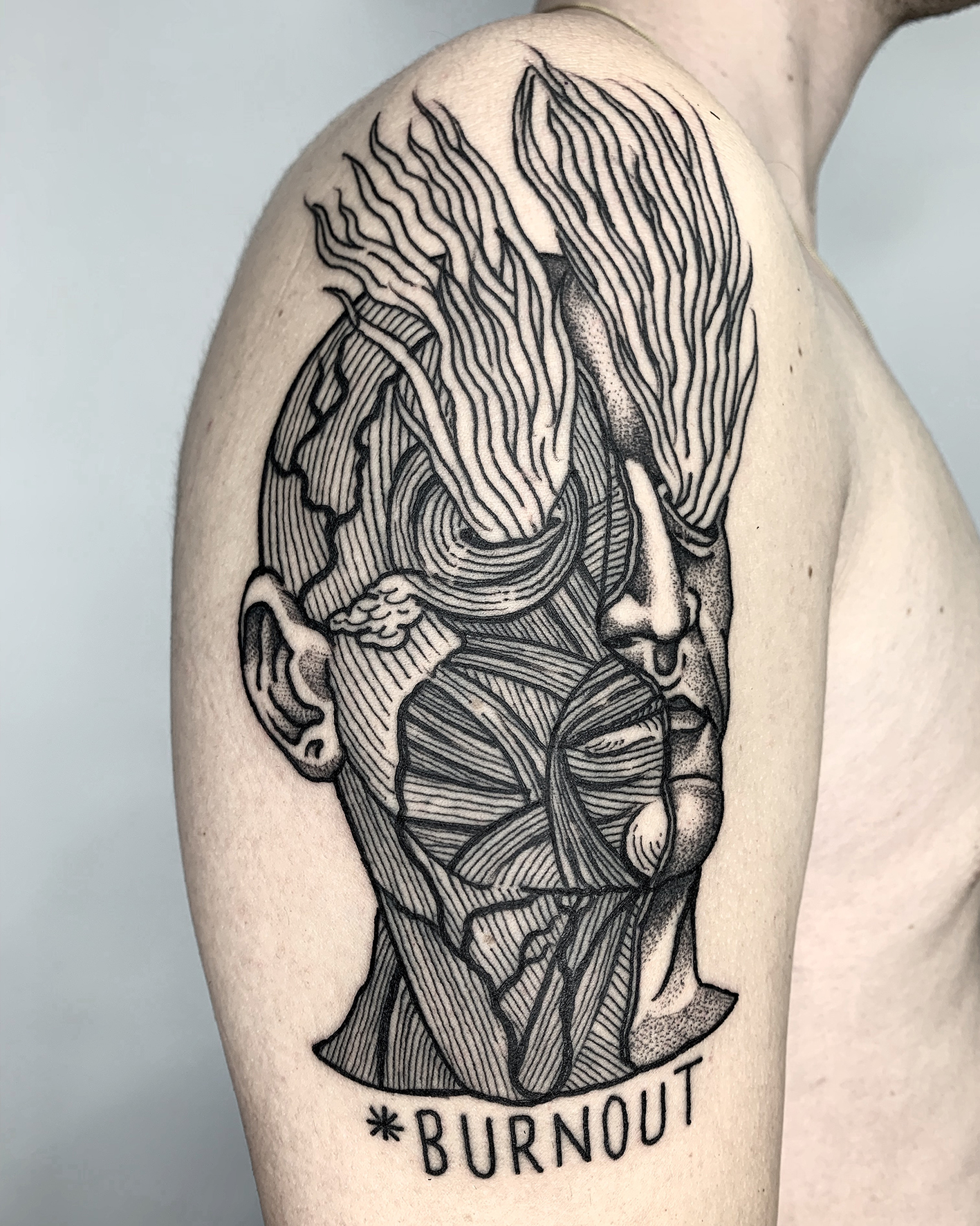 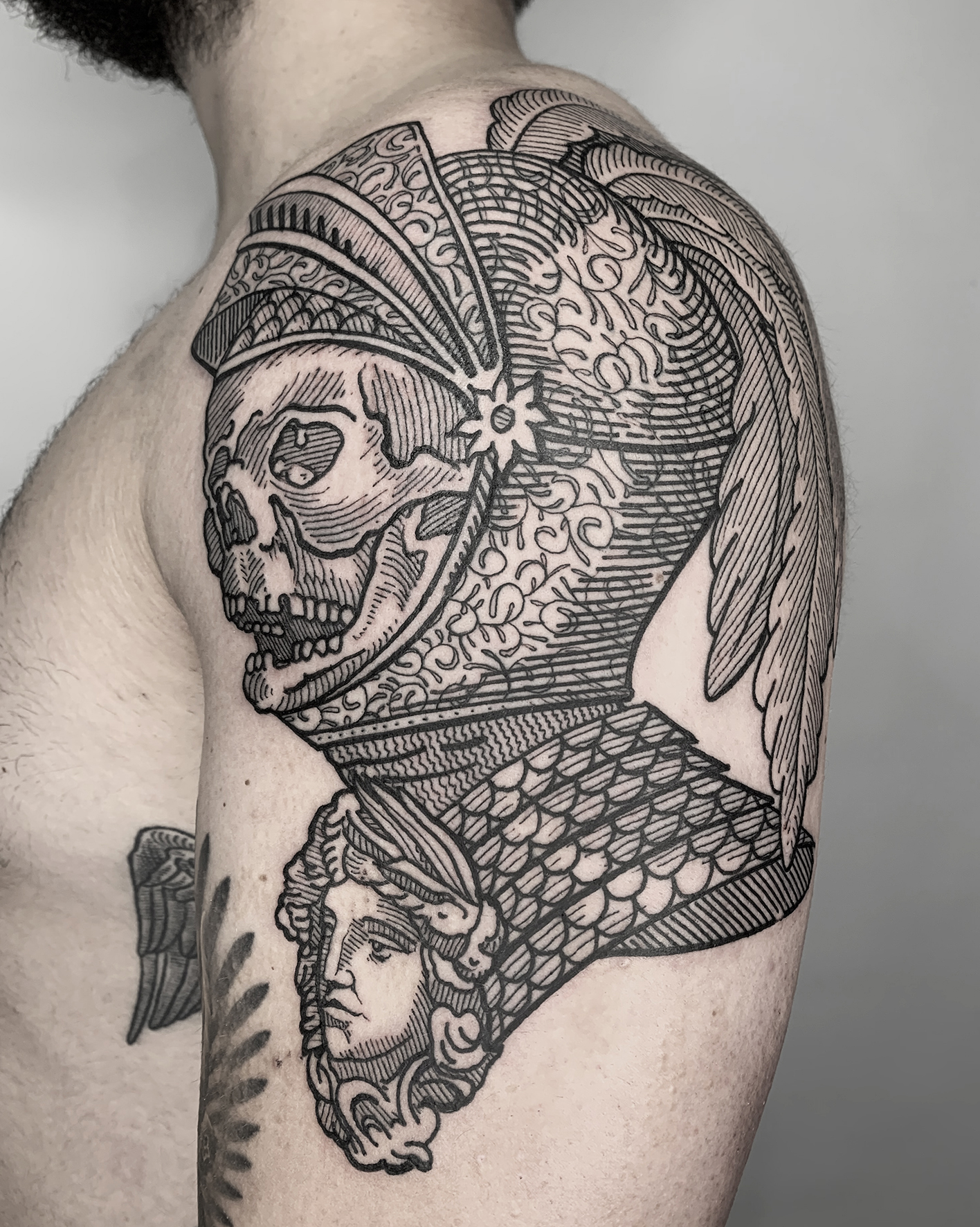 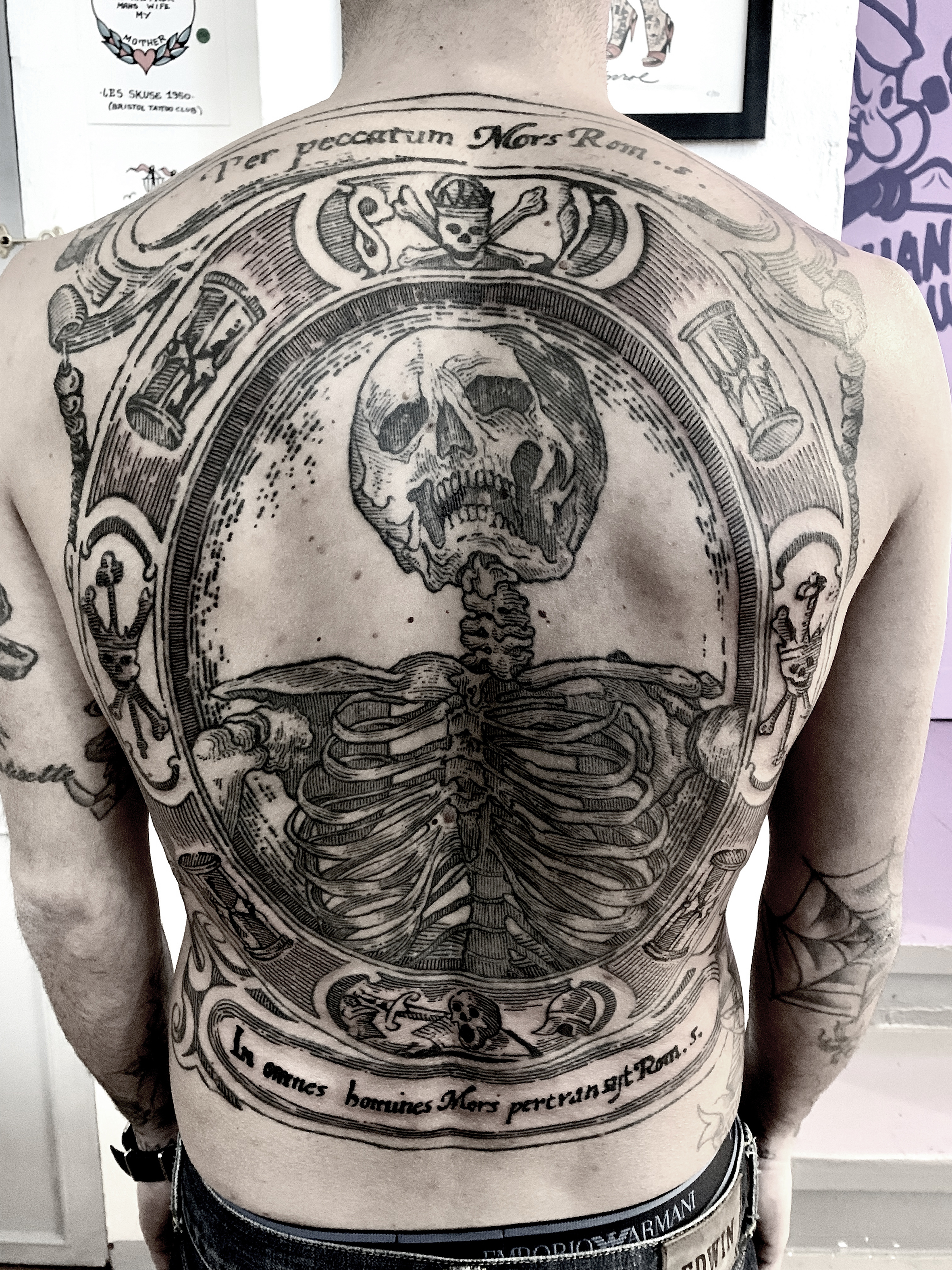 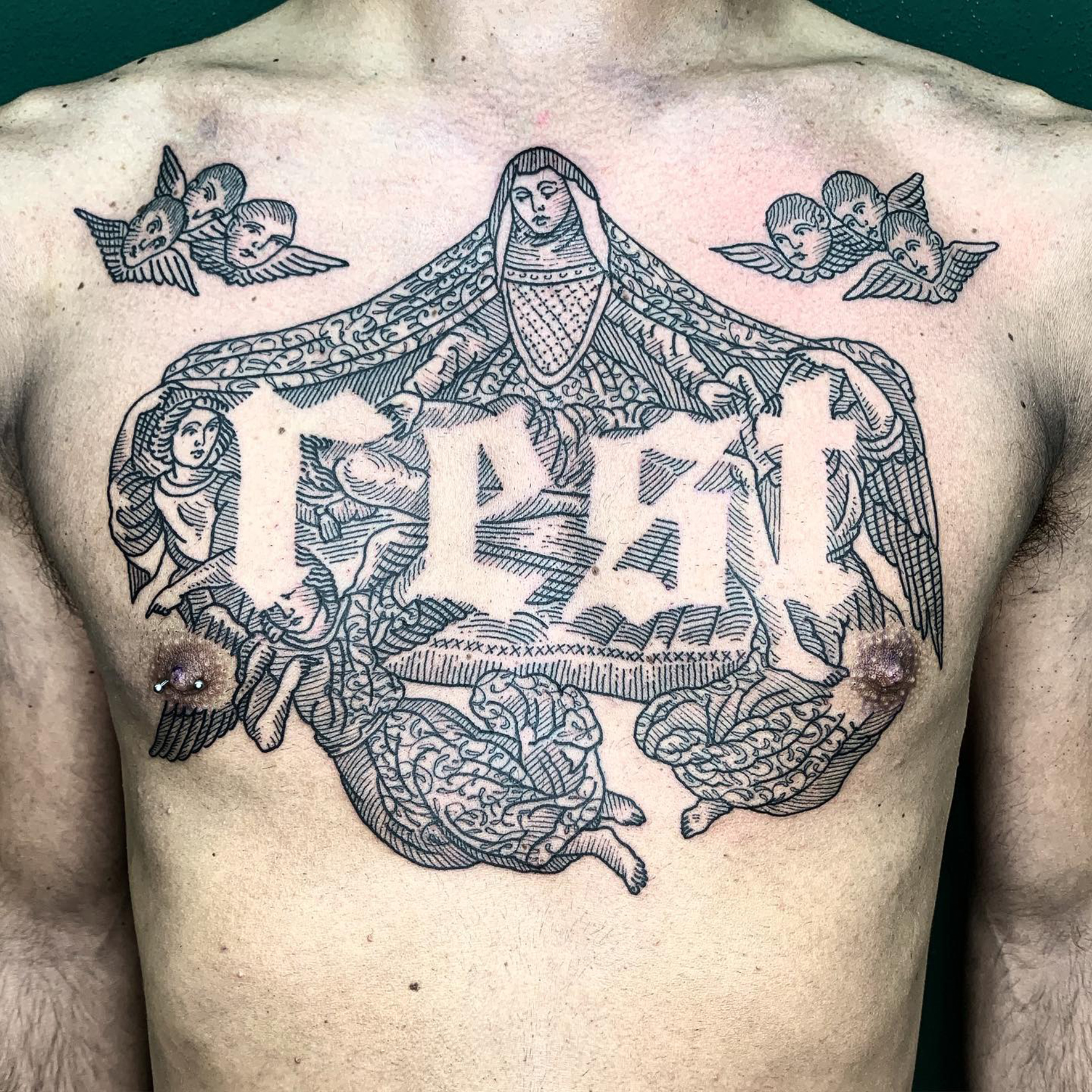 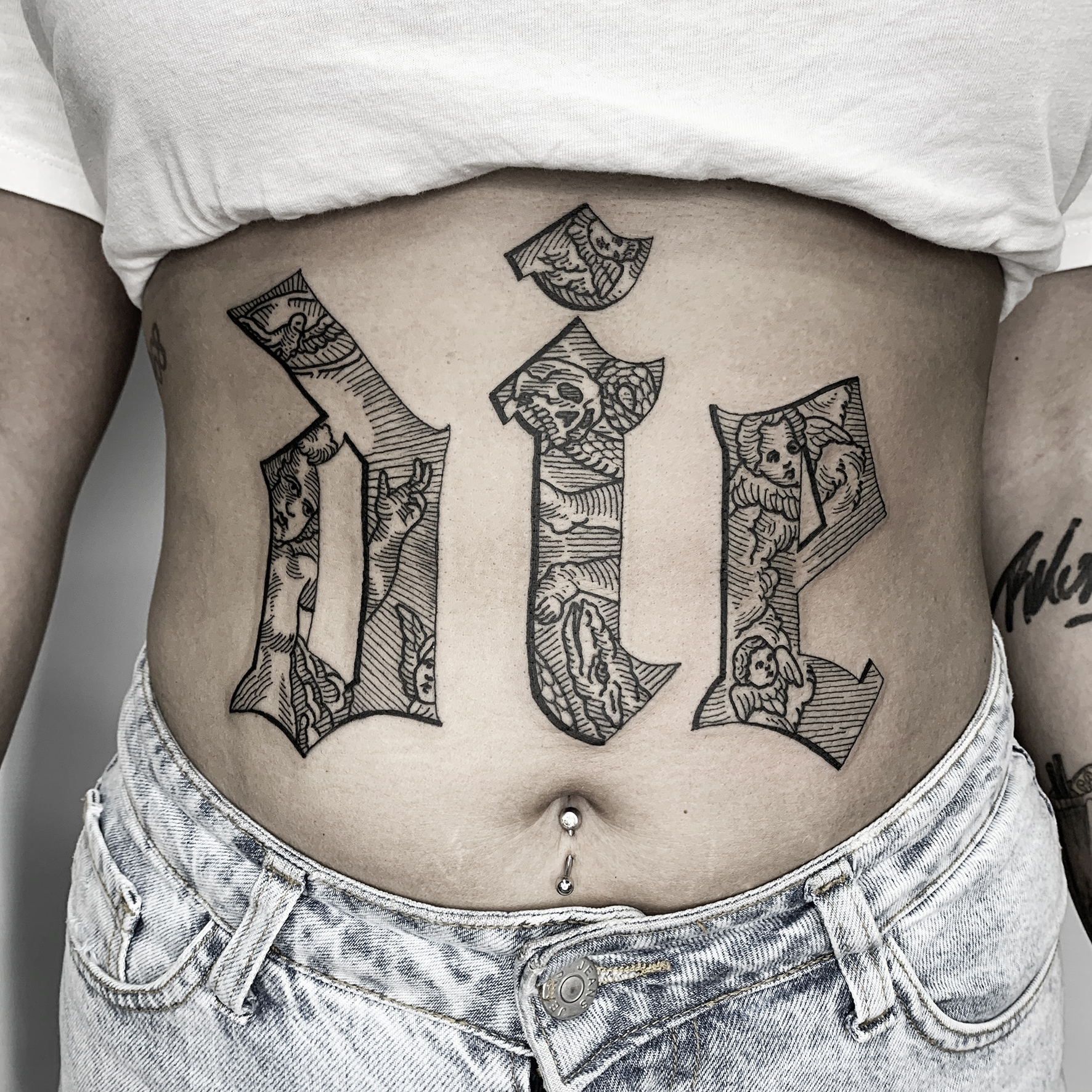 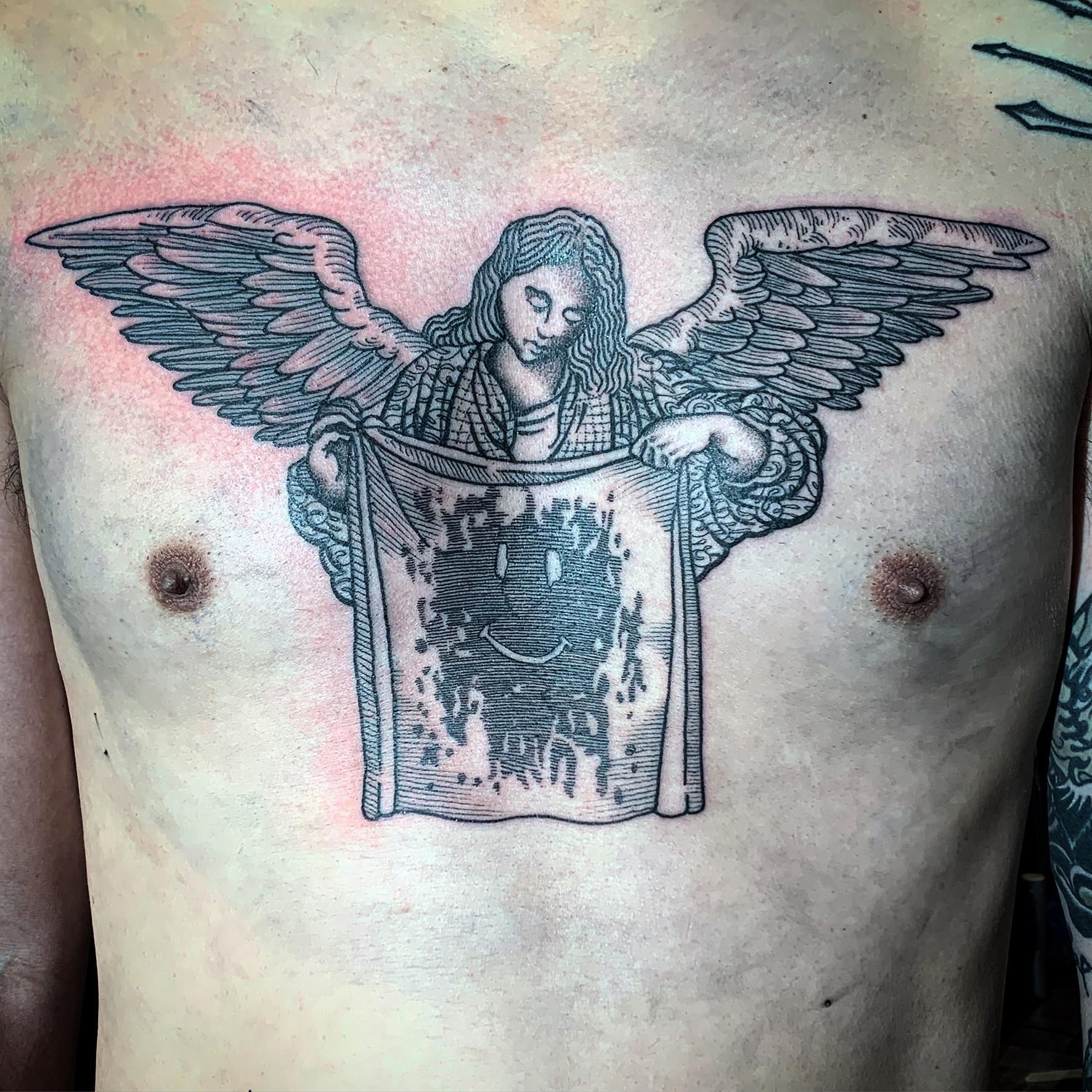 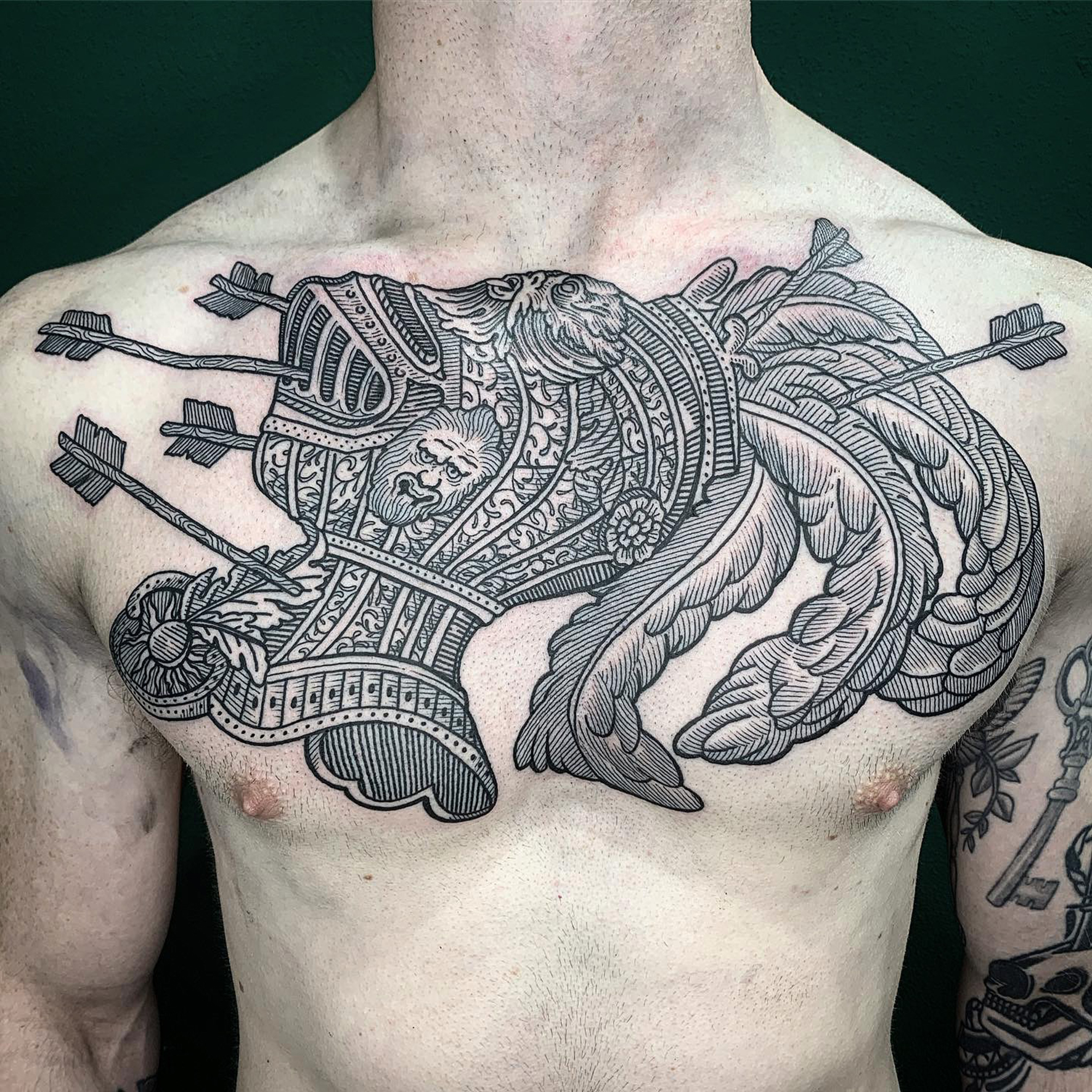 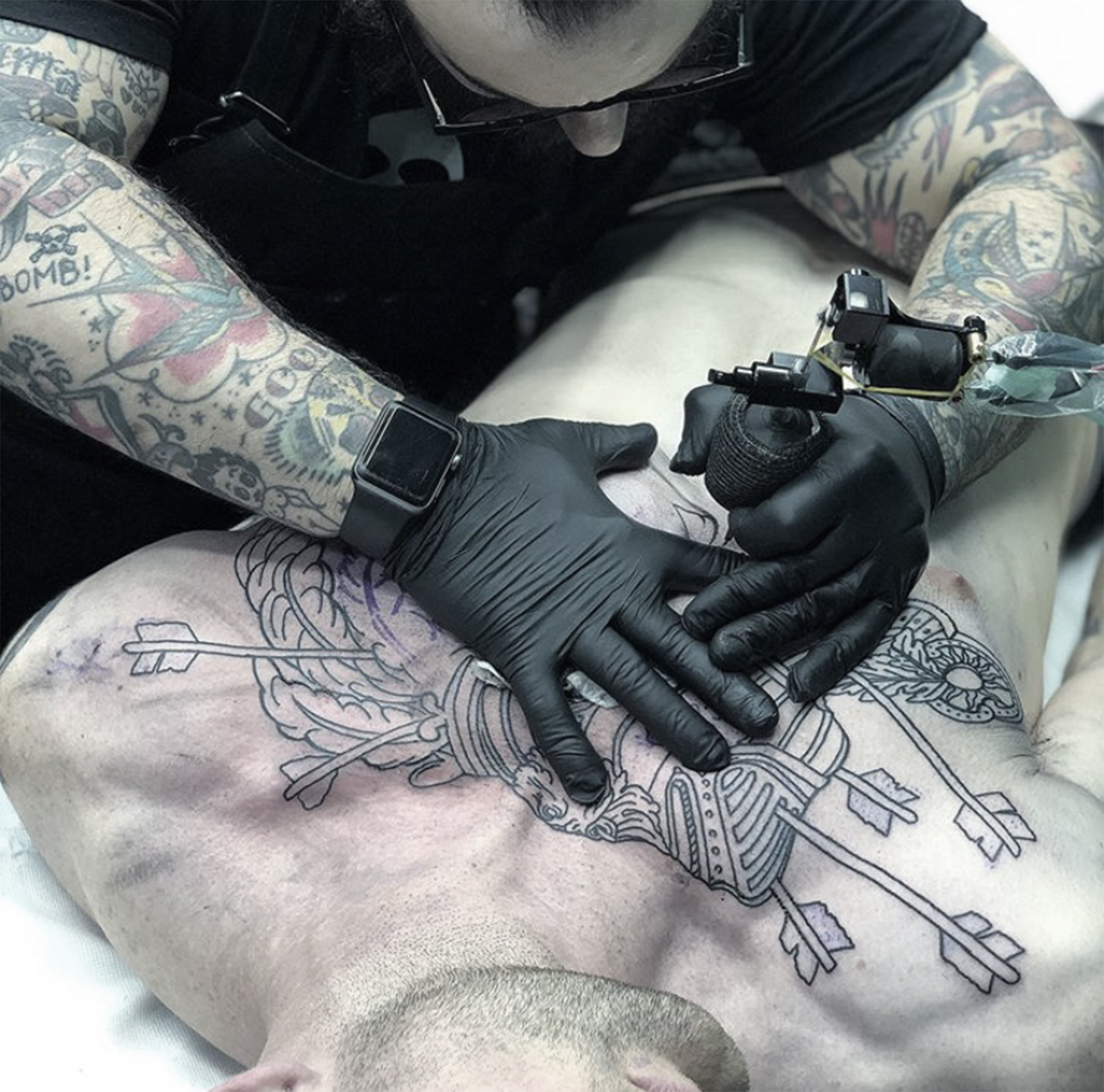 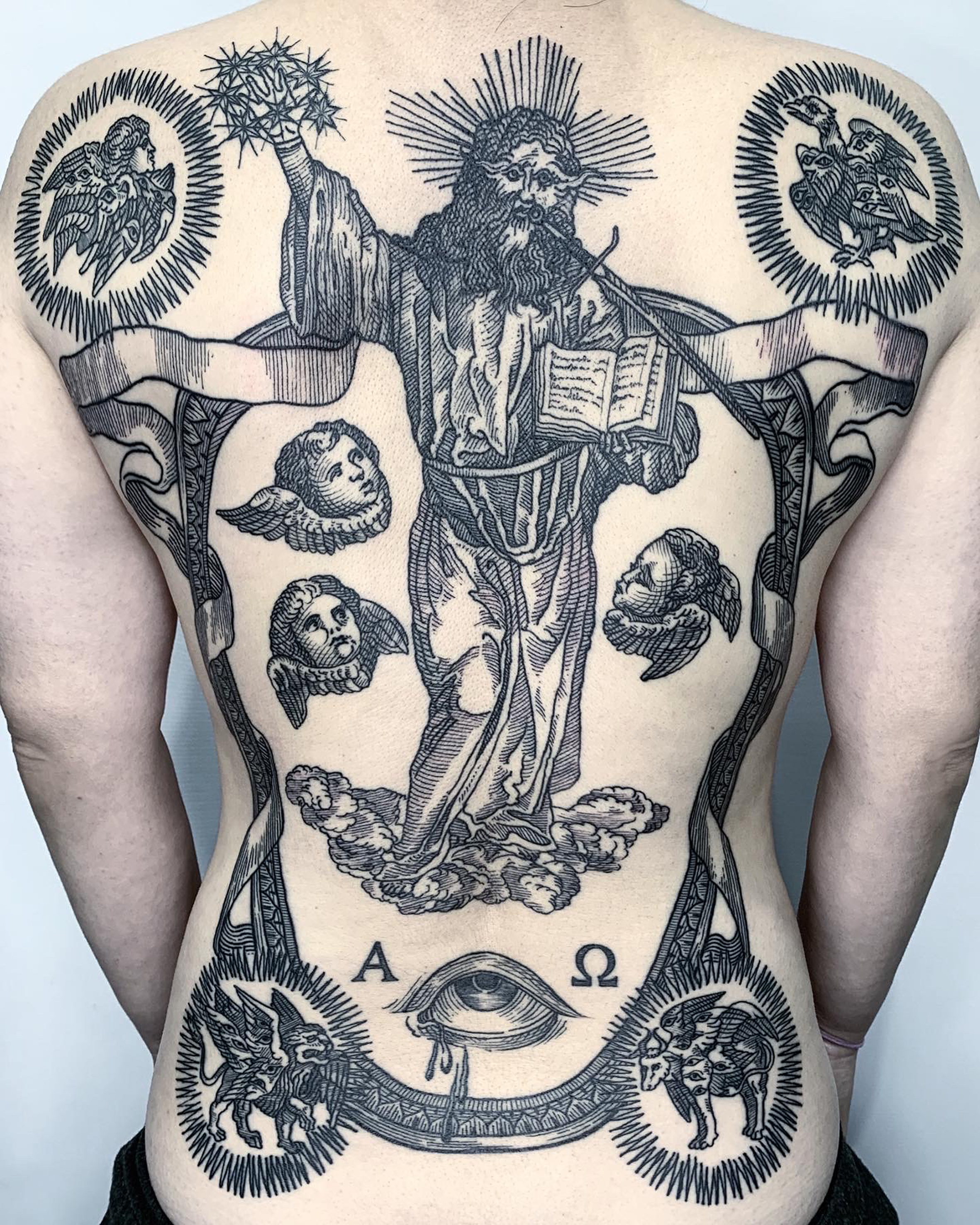 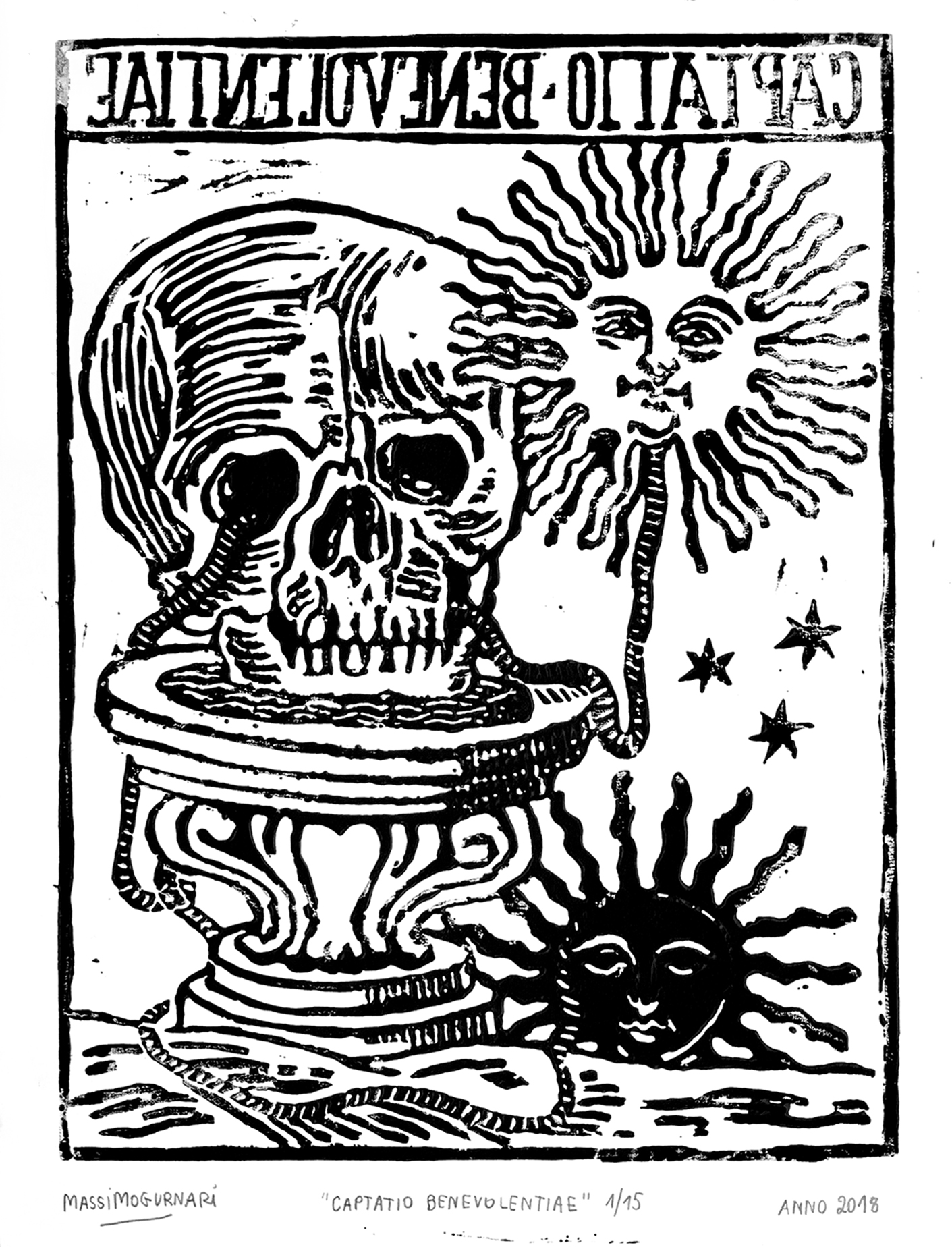 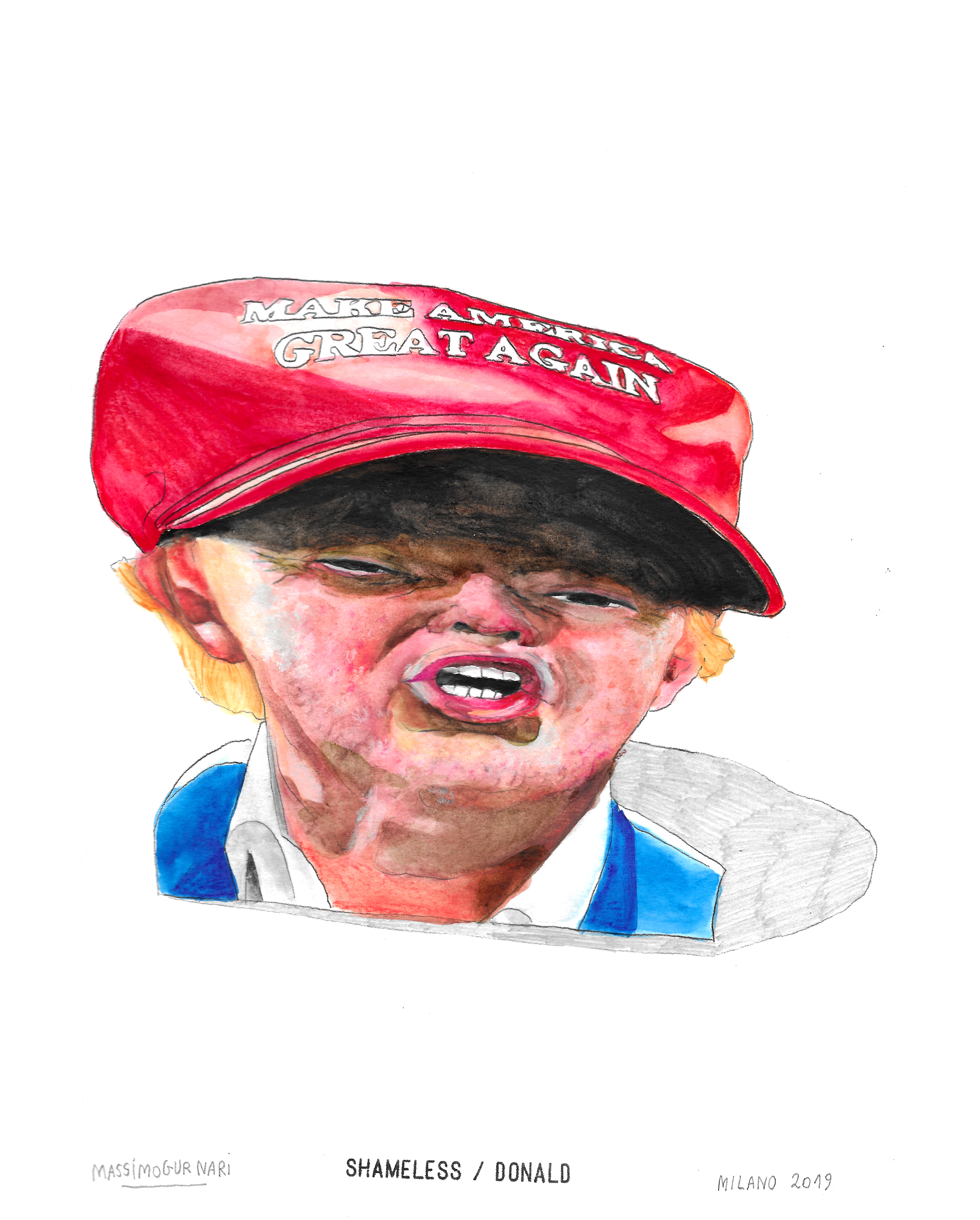 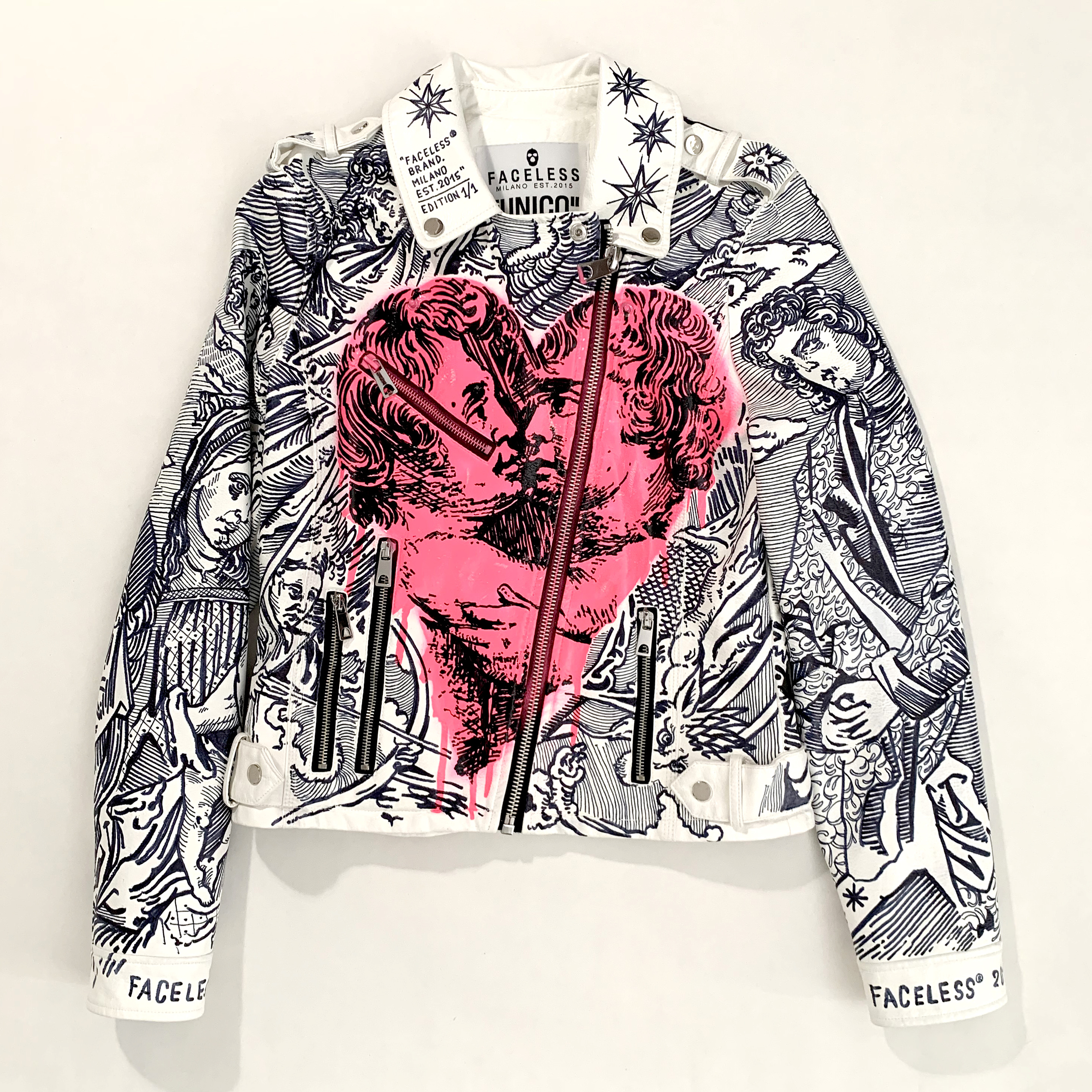 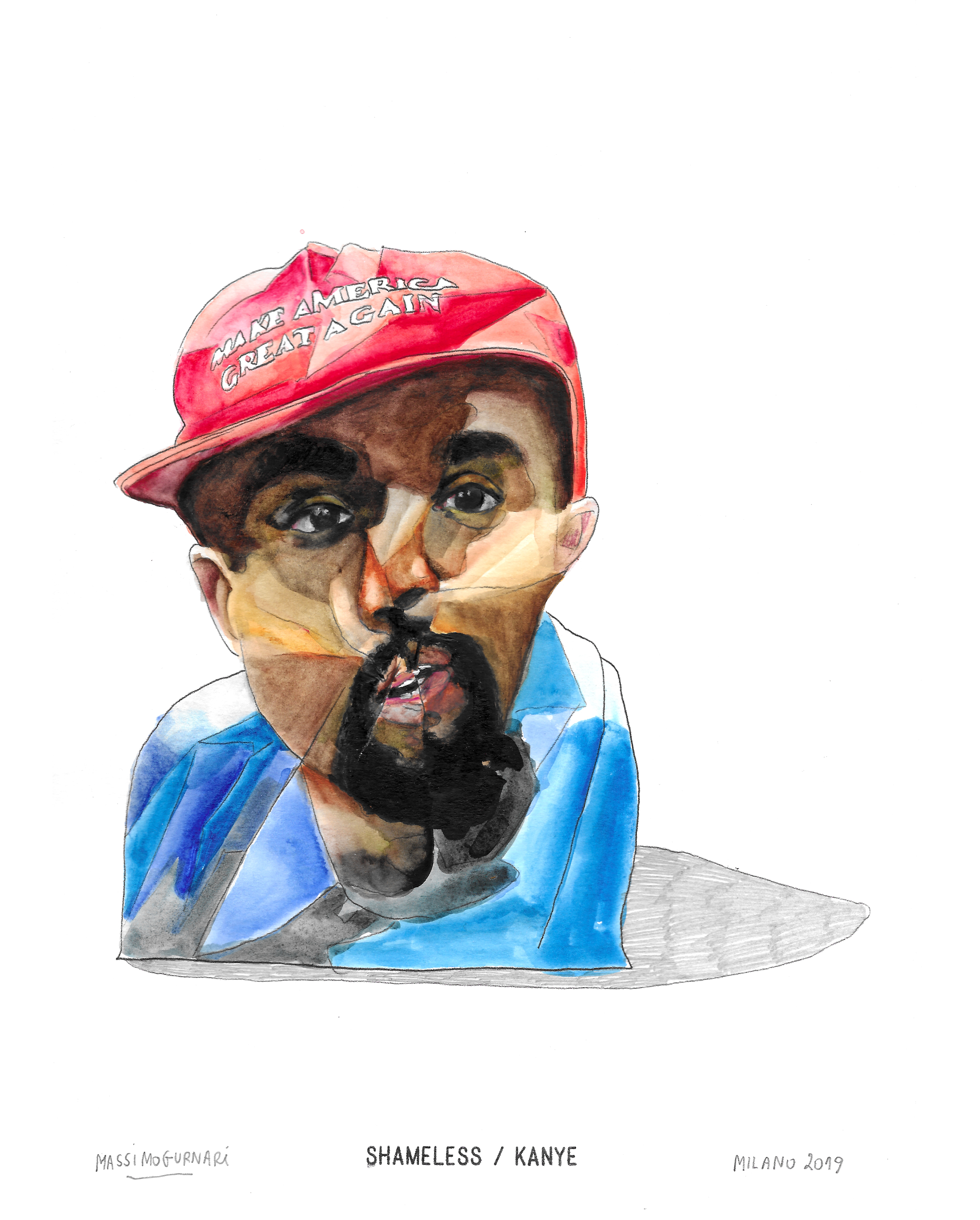 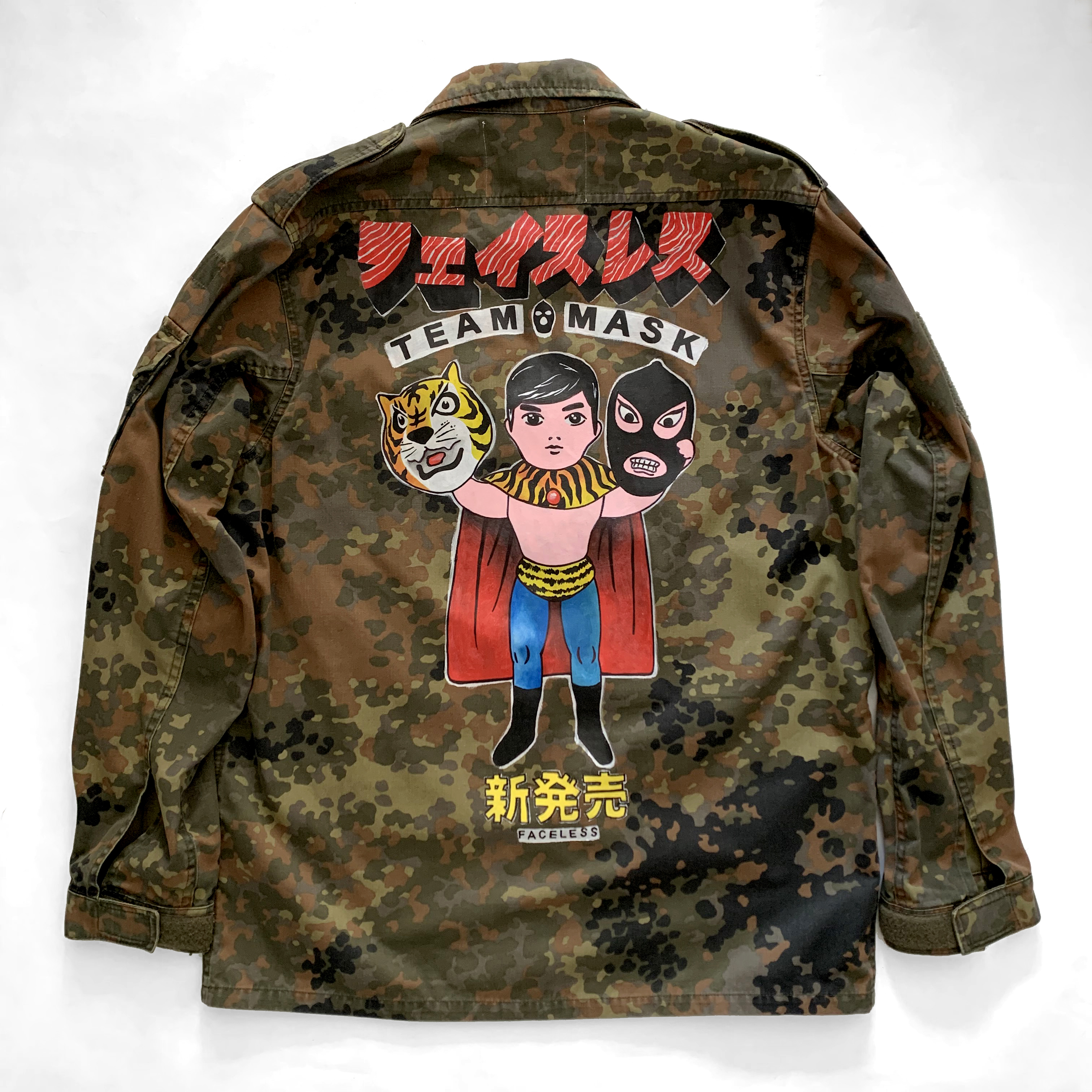 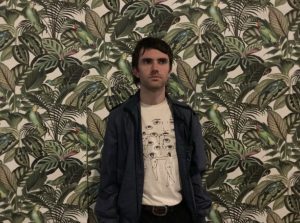 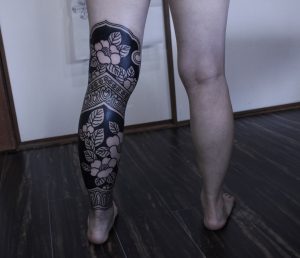 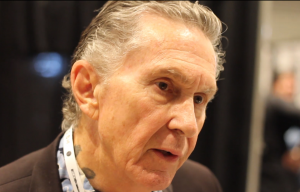