Michele Servadio was born in Italy in 1986. He grew up on the Alpine plateau of Asiago and in the Veneto countryside, and then attended the Art School in Padua and the University of Visual Arts in Venice. In 2007, he approached the world of tattoos. Fascinated by the traditions of this cultural phenomenon, he moved to London.

In his Hackney Wick workshop, Servadio created experiments with tattooing, painting, printing, and sound that resulted in unique resonances between the platforms. The aesthetic of his work is expressed in the interplay between these media, an acute attention to space differently emphasized through properties specific to each. His sound work emphasizes ambience and acoustics; his illustrative work dwells in the interstices between light and dark palettes. In 2014 he created “Body or Reverbs,” an experimental project presented across Europe, where tattoos combine with sound and assume the qualities of both ritual and performance.

From painting flash, to gathering and curating reference material, to working in wholly different media, tattooists have always been practitioners whose practices do not start or stop at the studio. With this in mind, TTTism is pleased to present a series of features on the work that tattooists do when they’re not tattooing—or, in other cases, when tattooing is only one component of a larger artistic production. After our first look at Servadio's print project, Sizing Grounds, we turn to the second installation of our two-part feature on the work of the artist. On the occasion of his new print and sound release, Body of Reverbs: Vectors of the Self, Servadio sheds some light on the impetus behind his project and the delicate relation it creates between tattooing, performance, sound art, and spectacle. His eponymous print and sound release is available through Coward Records. The release uniquely documents these otherwise ephemeral performances, which have occurred throughout Europe.

Could you tell us a bit about how you came to be a tattooist and artist? Were you always drawn to these practices or was there a deliberate point after which you decided to pursue them?
Tattooing was part of the underground culture where I grew up—I’m talking skateboarding, punk music, autonomous places. I have always been doing illustrations and painting, and tattooing was this new thing that was in 2007—which was not that long ago—itself very niche. Information regarding tattooing was not readily available, so I did some research. I got myself a tattoo machine and tattooed myself. From then on it’s been a journey of understanding truly: “why?” Why work on human bodies and their consciousness of themselves?

What is the story behind the conception of the “Body of Reverbs”?
“Body of Reverbs” connects tattooing with another great passion of mine, which is “noise” music. It started as an experiment where I connected my tattoo machines to my friends’ sound equipment. It was fun, I was playing a tattoo machine into someone and they could hear the sound and the pain at the same time. It felt as if instantly a little ritual happened: it had a development, a beginning and an end. It was dictated by the experience that we were creating, not by the design of the tattoo, which was abstract anyway. At that point, I understood the potential of this synesthetic connection. I could take tattooing back to a primitive sphere. I felt like a shaman. I have rearticulated tattooing outside of the notion that is a professional product which one buys and applies to their skin.

What are you trying to explore with the project? This is an event that has taken multiple forms, your current print and audio release preceded by performances in many cities. Does the goal of each performance/instance differ or do they all work towards some kind of larger project?
I am taking tattooing back to its magical, ritualistic nature but in a contemporary context that utilizes contemporary solutions. The goal is to understand the needs of a new spirituality within art and tattooing. Accordingly, “Body of Reverbs” explores the role of the body and its connection with human subjectivity. I am exploring how tattooing influences this relation, and doing so while I act as a tattooer. That is the reason why I reach into acupuncture and performance, and that is why this practice can take very different forms. It can be a public performance within an art context , or a private practice in an isolated environment; an installation. It can produce artefacts as photography or paintings or prints. I have many ideas I want to develop in the future.

The tapes, books, and vinyls we have made are not only a product to present the project and materialize the different achievements and developments we have realized. They are also a statement. We make it real; we deliver this practice as a valid new option of what tattooing can be in our society. I envision “Body of Reverbs” as a tattoo practice in itself—one where I research its ritualist aspects. The idea is to take tattooing back to a very primordial context where magic, medicine, and tattooing were perhaps one unique practice. This is the reason why acupuncture is part of the process. The project take multiple forms because it develops in different places, with different people.

"The goal is to understand the needs of a new spirituality within art and tattooing. Accordingly, 'Body of Reverbs' explores the role of the body and its connection with human subjectivity. I am exploring how tattooing influences this relation, and doing so while I act as a tattooer. That is the reason why I reach into acupuncture and performance, and that is why this practice can take very different forms. It can be a public performance within an art context , or a private practice in an isolated environment; an installation. It can produce artefacts as photography or paintings or prints. I have many ideas I want to develop in the future."

The visual and sonic elements of the project are also in part generated by tattooing. Where does tattooing figure in this process? What is its role?
I believe the person is the ultimate center of the tattoo practice. The idea of applying artwork onto someone doesn’t sound quite right to me. There is something missing. The person is the center of “Body of Reverbs” simply because “Body of Reverbs” is tattooing. Of course there is more around it—projections and sound, for example—but everything is generated by the body, or the connection between the needle and the body. Specifically, the music is generated by the amplification of the sound that the needle creates on piercing the skin. This is where the magic happens, the connection between pain and sound that resonate deep one’s subjectivity.

The body is the vessel of the person and I believe tattooing needs to act at changing the person through changing the vessel. Tattooing can become truly healing when you honor the deep changes that it can bring to the person, in addition to the surface of the skin. This is where tattooing is at its most powerful; when it is acting deeply, physiologically, energetically…not just in its decoration of the vessel or body.

While each performance is unique, could you walk us through the protocol itself? How does the ritual work?
There is a pre-ritual where we talk to the person. Myself (the tattooist), the acupuncturist (Mick Boiter), the video artist (Karl Verboten), and the sound artist (often Alberto Brunello but also in collaboration with many others) talk to the subject in order to understand their needs. Those needs indicate how we must develop the session. Most recently, the first part of the ritual has morphed into a moment of where the subject’s breathing is amplified; they listen to themselves breathing through the sound system. This is the key moment where Mik Boiter signs the points and directions on the body and consults me on how to go on with the tattooing. The different areas that are getting tattooed are specific acupuncture points. Then I proceed with the tattooing, which recently has ended up being only hand-poke, and I develop a circular crescendo through a dialogue between me and the sound artist. This continues until we reach a saturation point of sound, ink on the body, and pain. At this point, there is the first drop where we check on the person and discuss how to transition into the next stage of the ritual. There is a lot of talking between the team and the subject. While we work we communicate—it is part of the ritual. We are also working, not just performing. From this point on, the acupuncturist will choose the points, it will be a back and forth between him ‘signing’ a point and me tattooing it. This is because each point is dictated not by what we talked about before to the person, but by the currently fluctuating state of that person. Everyone can react to the first prayer ritual in significantly different ways. This is an adjusting—we can decide to push it further, or hold it back in a more nurturing way. The last part of the ritual is the cleaning. Imagine the body at this stage being completely covered with ink. The act of cleaning brings the person back to reality, to a normal stage of being: they have been on a trip through pain and sound. The cleaning stage reveals the actual tattoos, permanent traces the ritual. 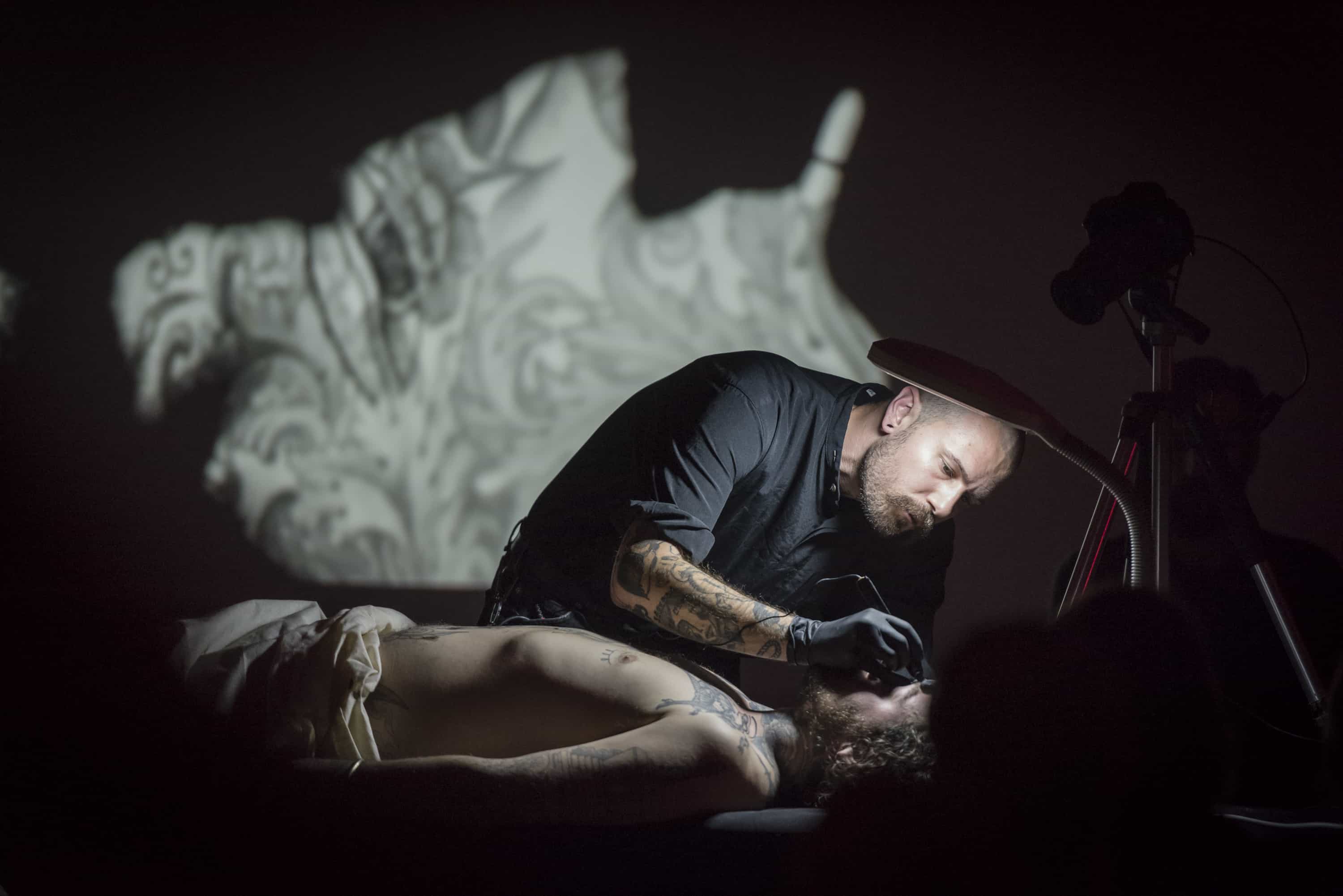 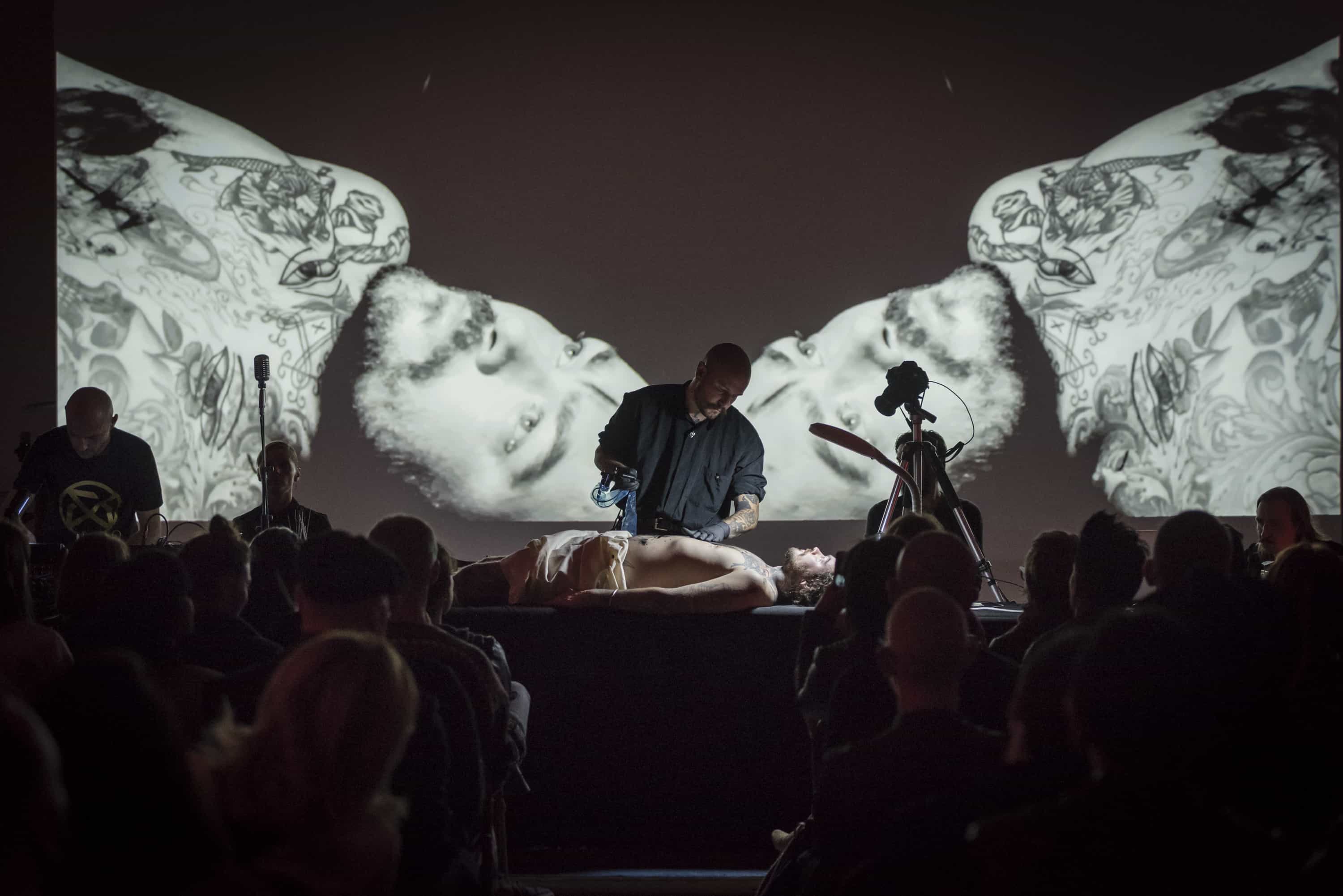 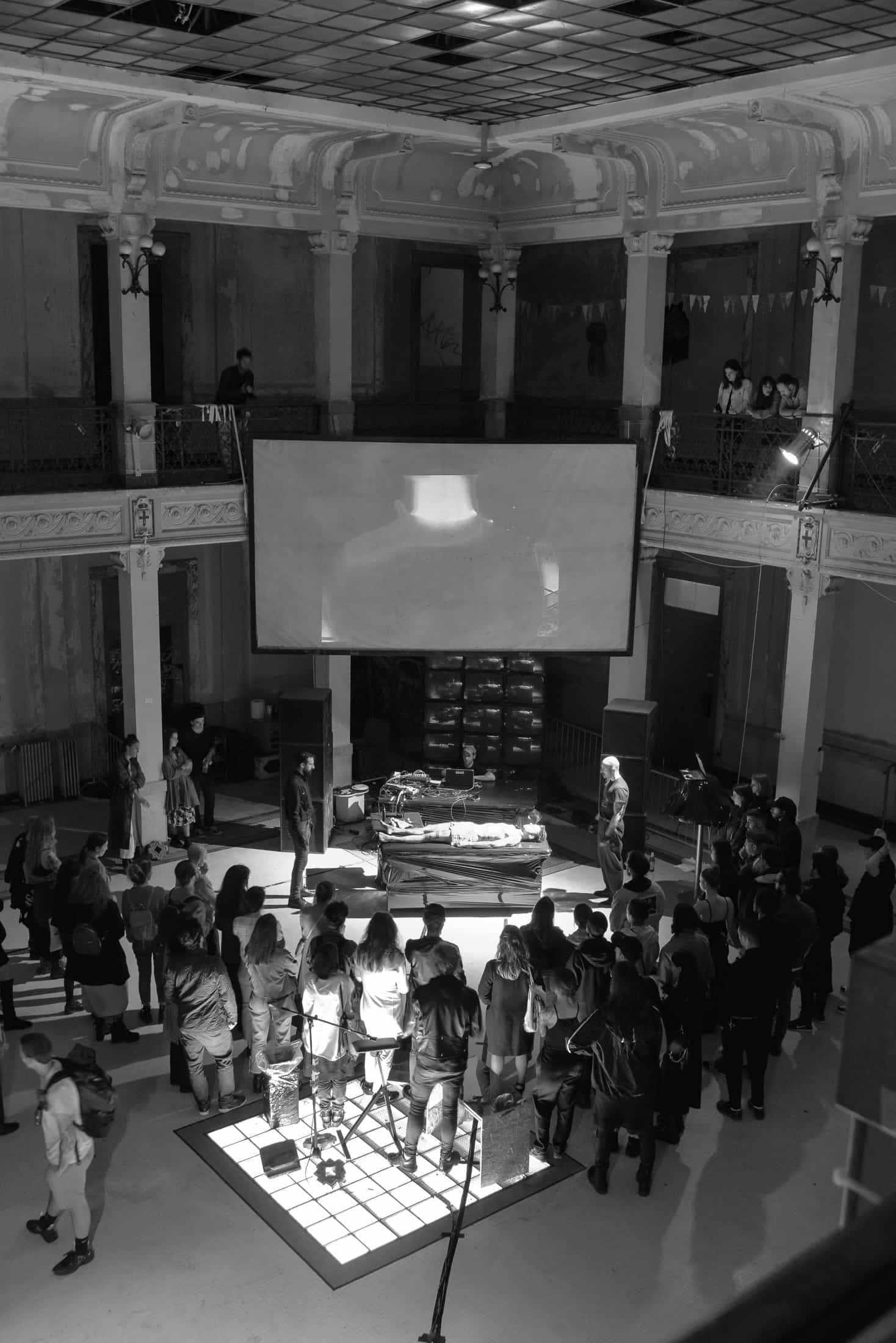 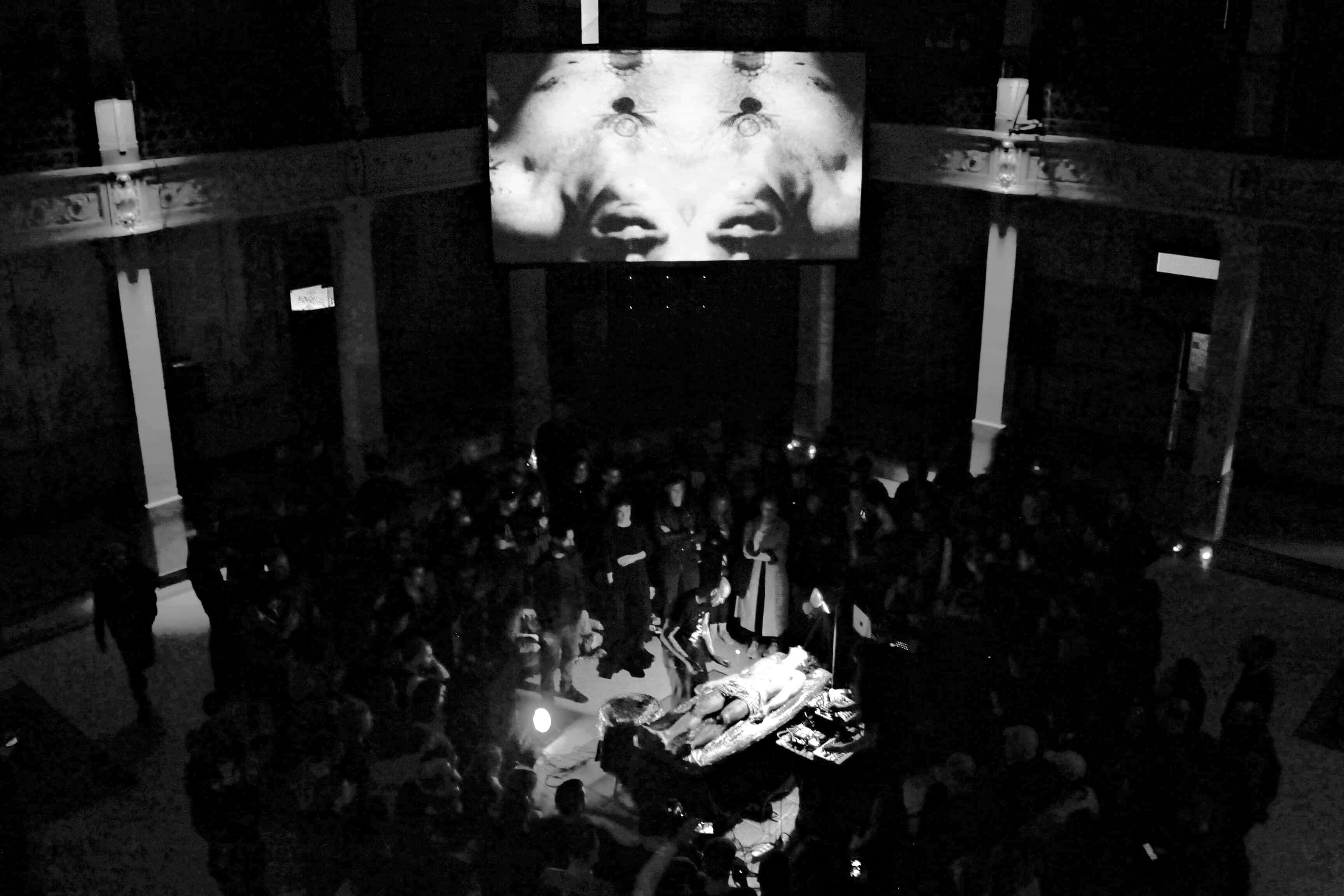 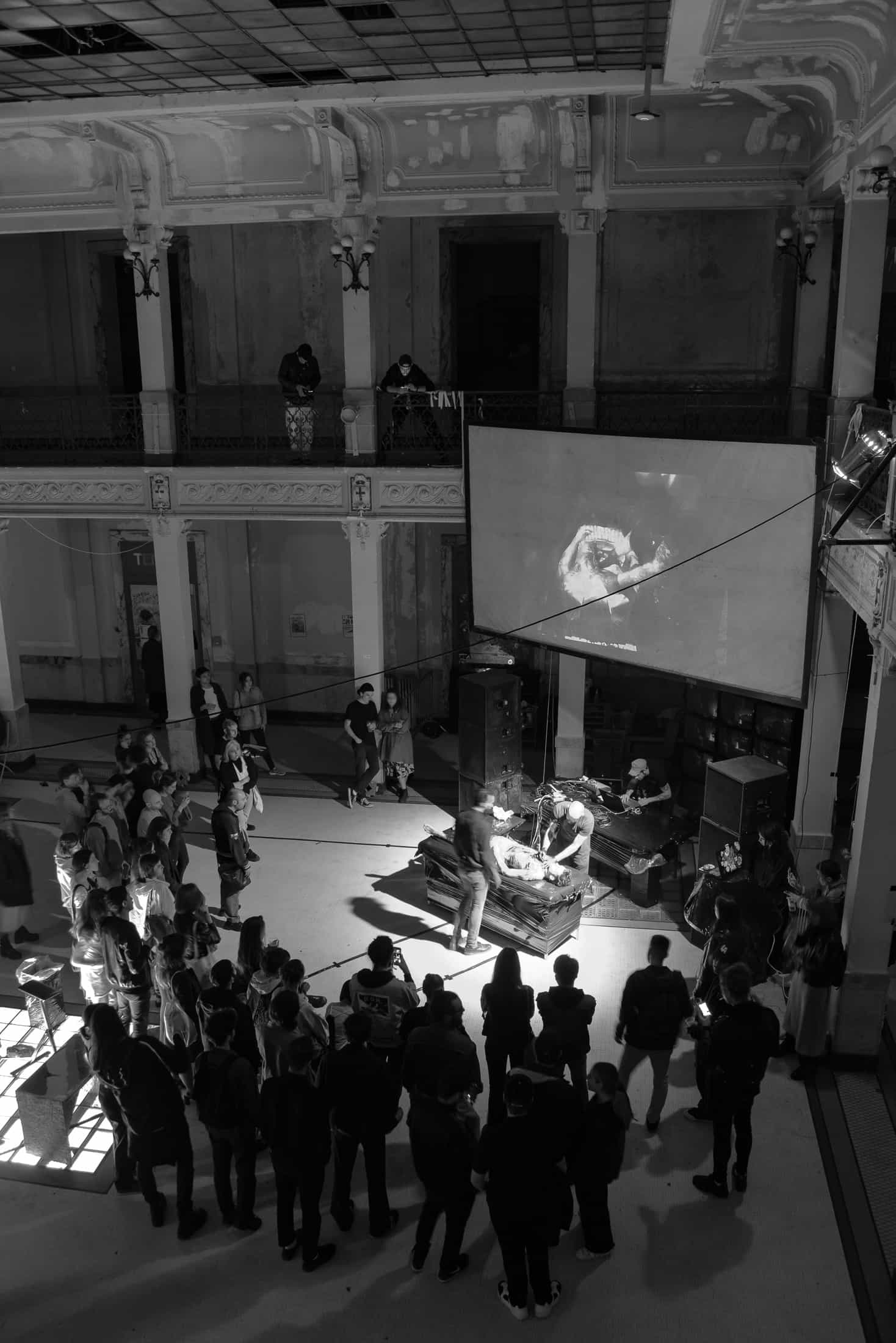 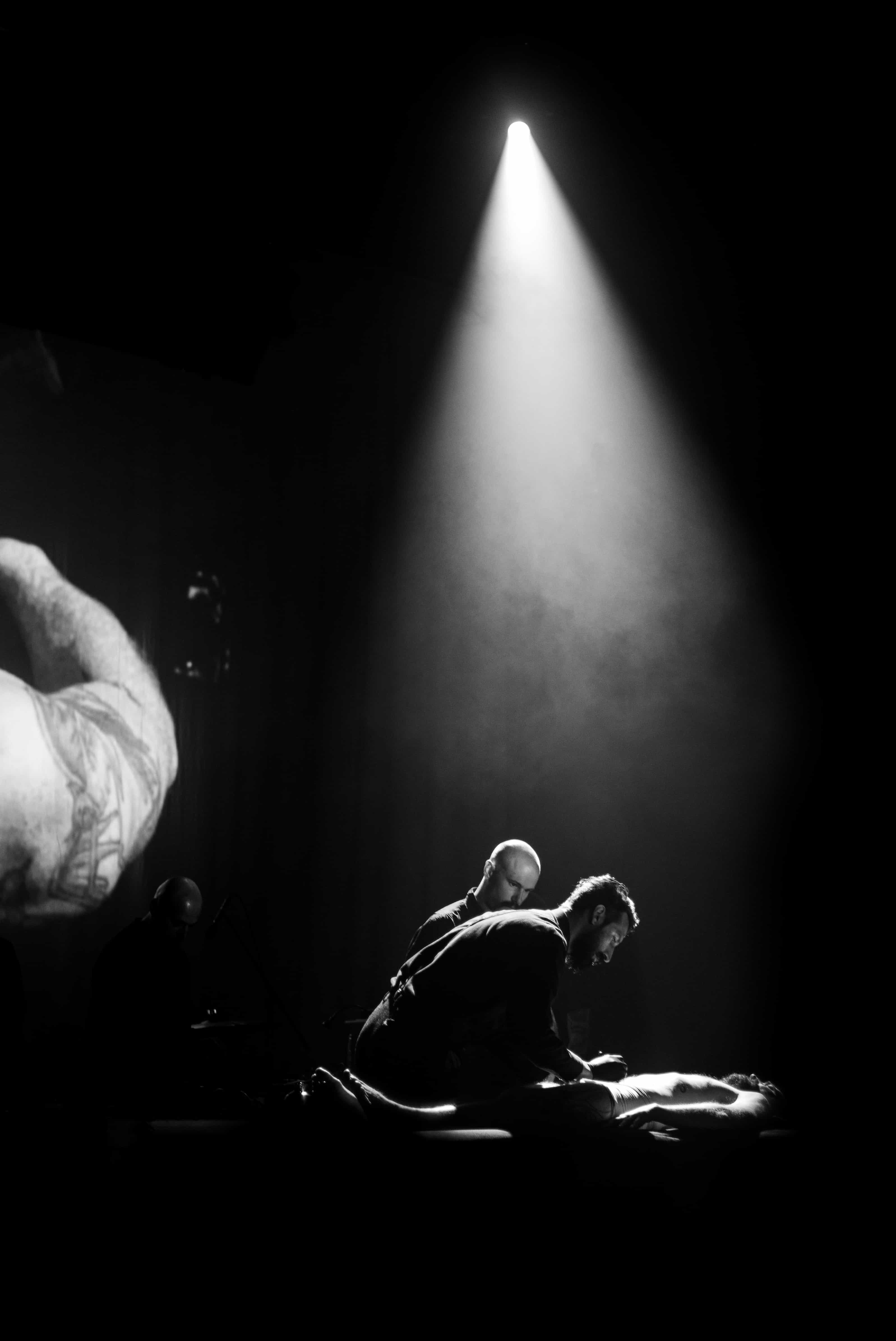 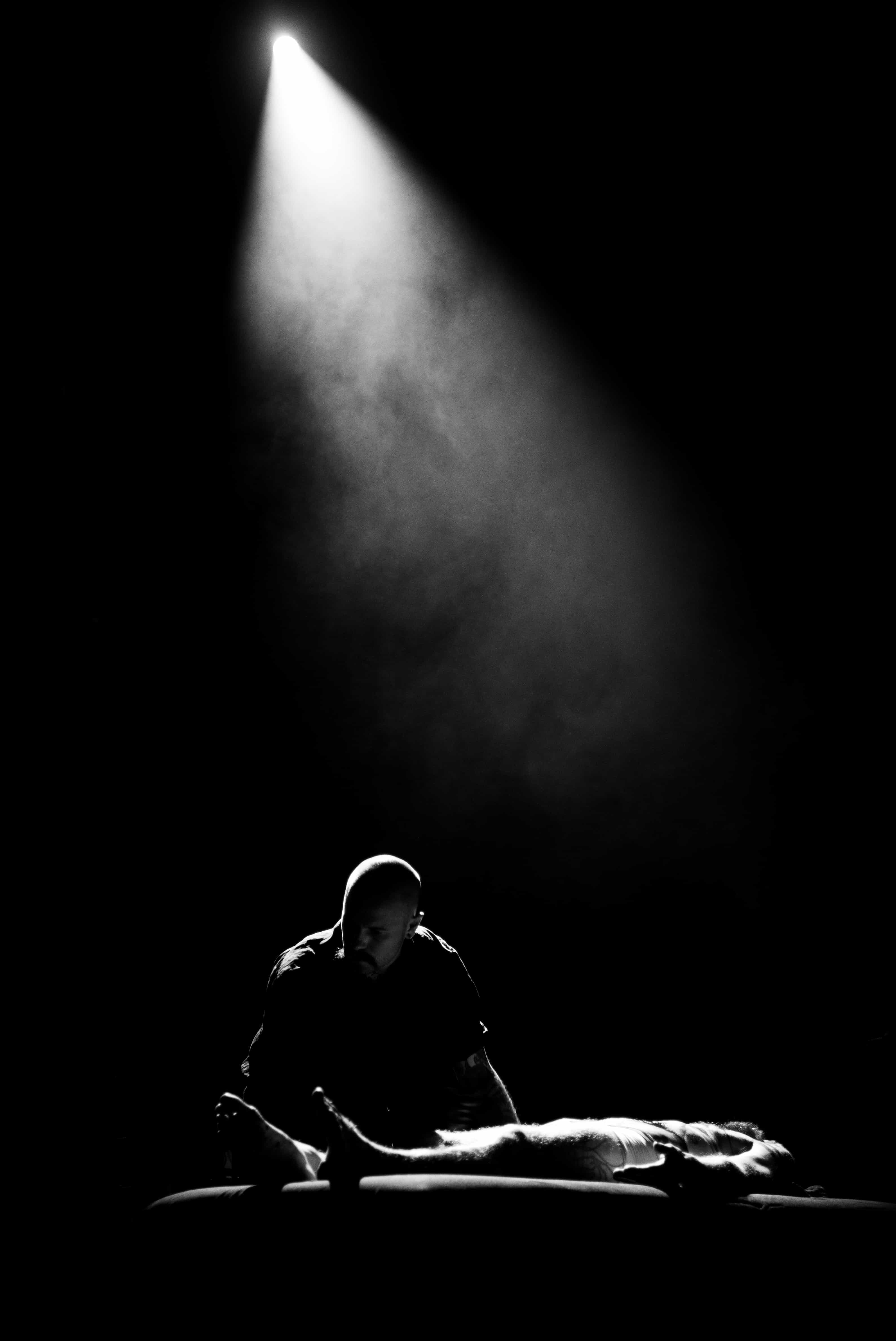 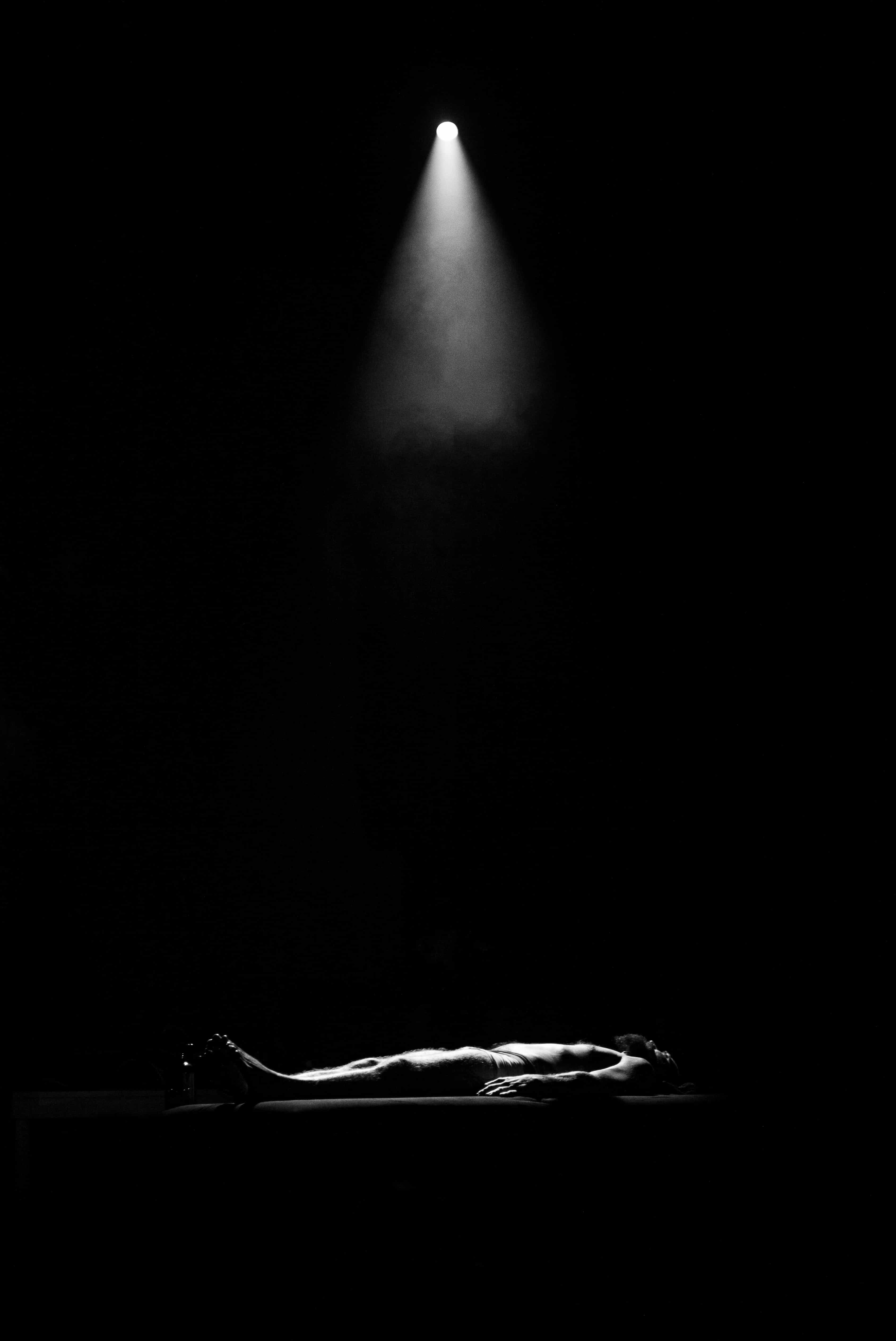 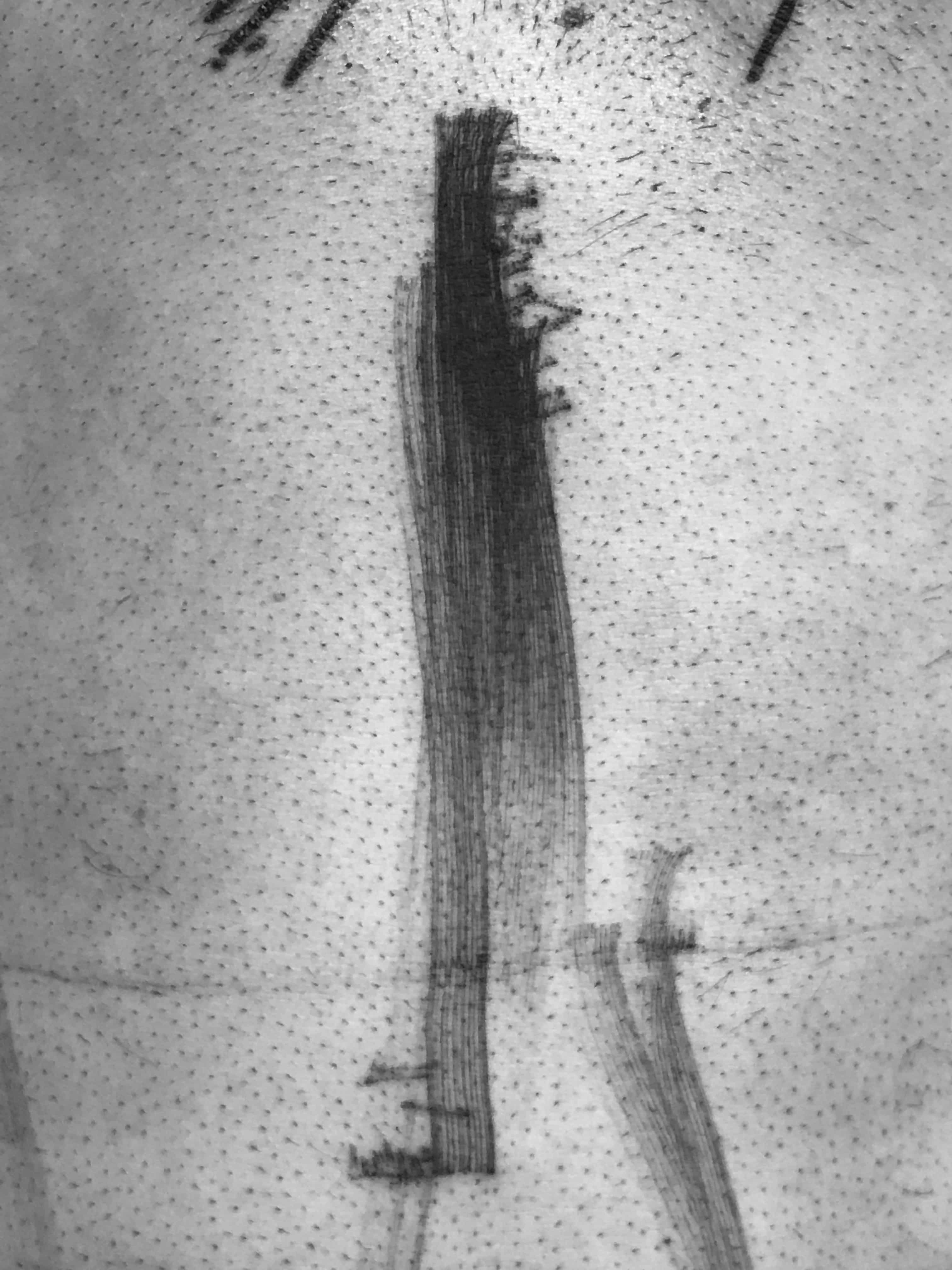 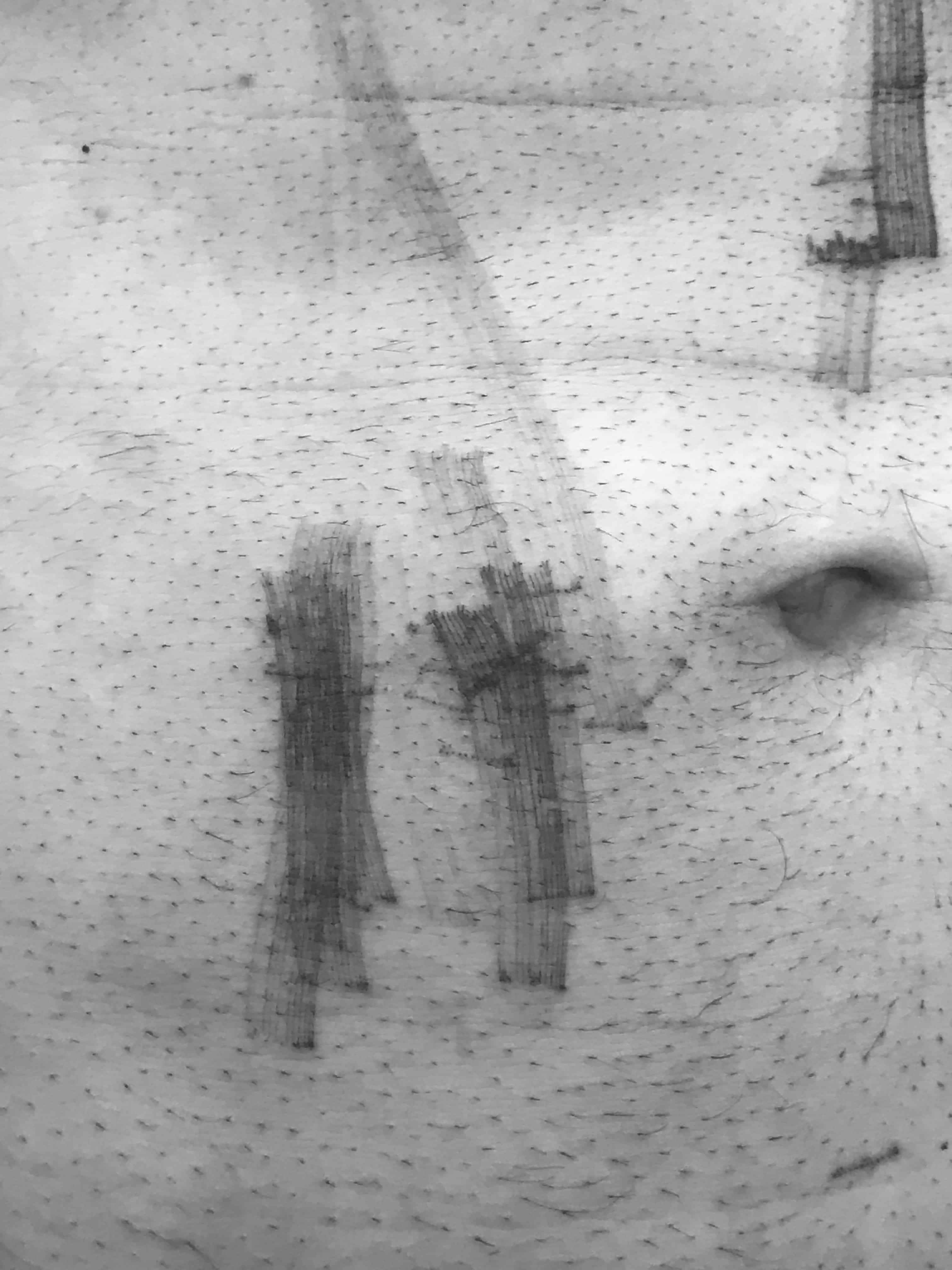 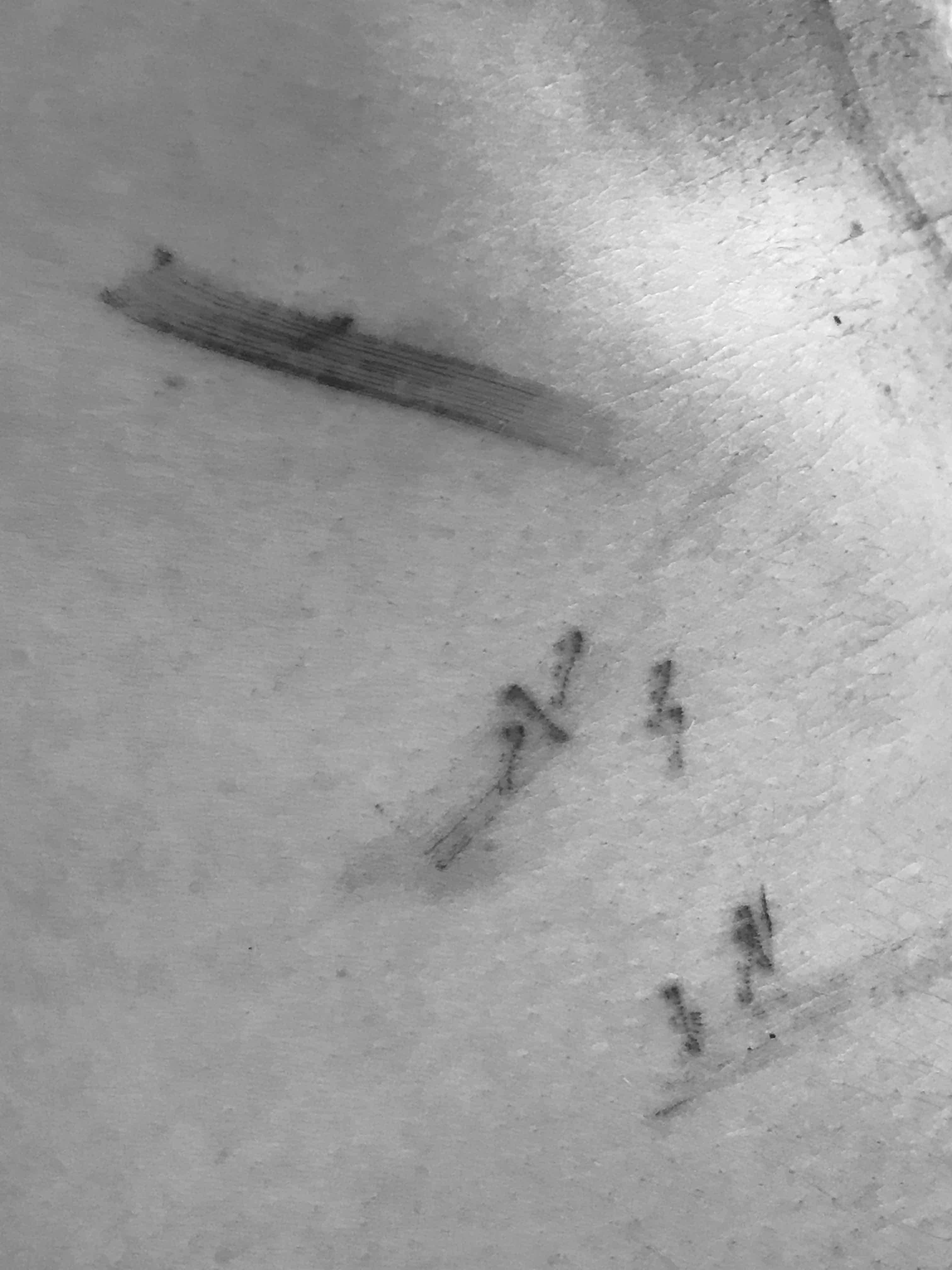 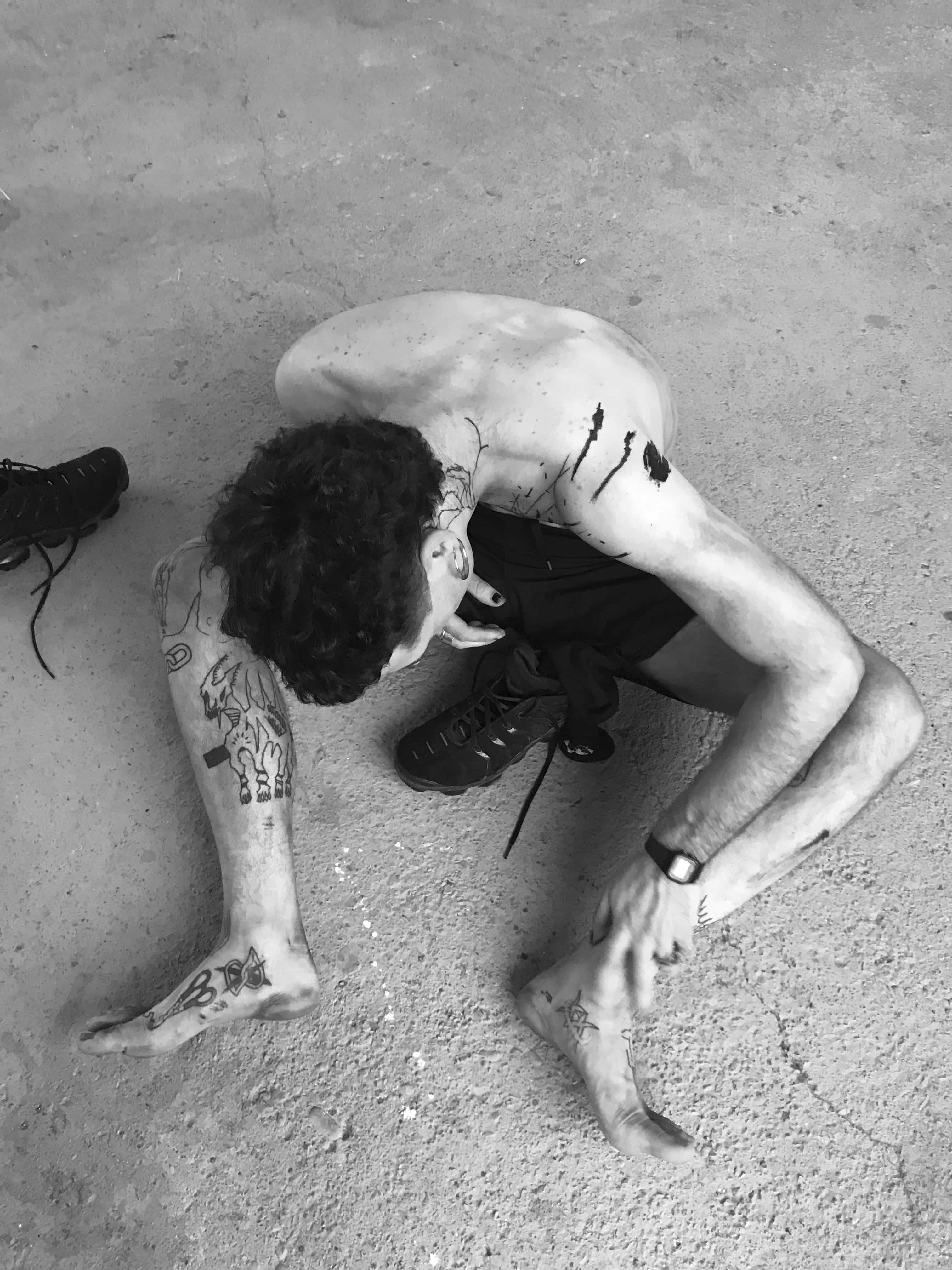 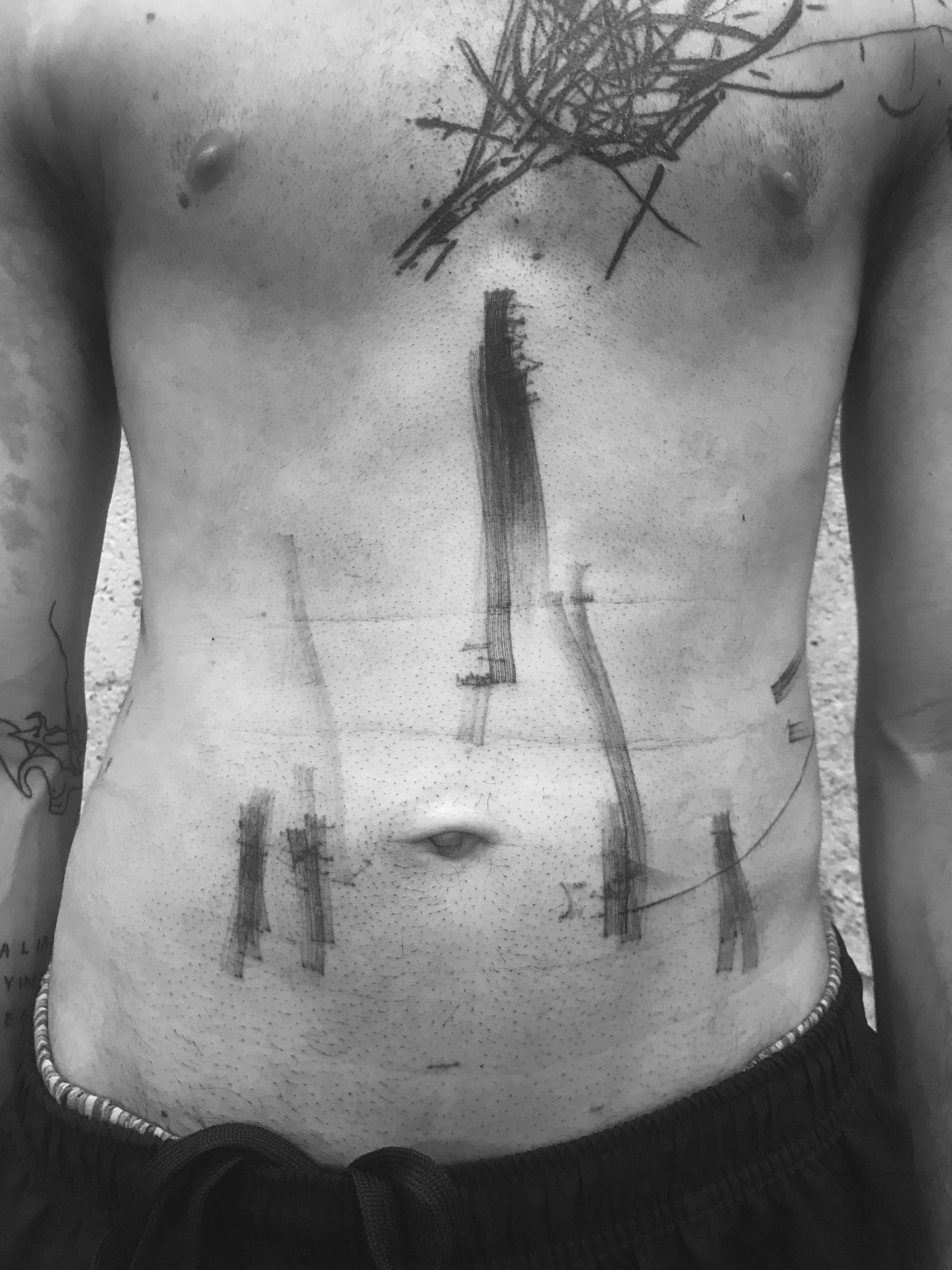 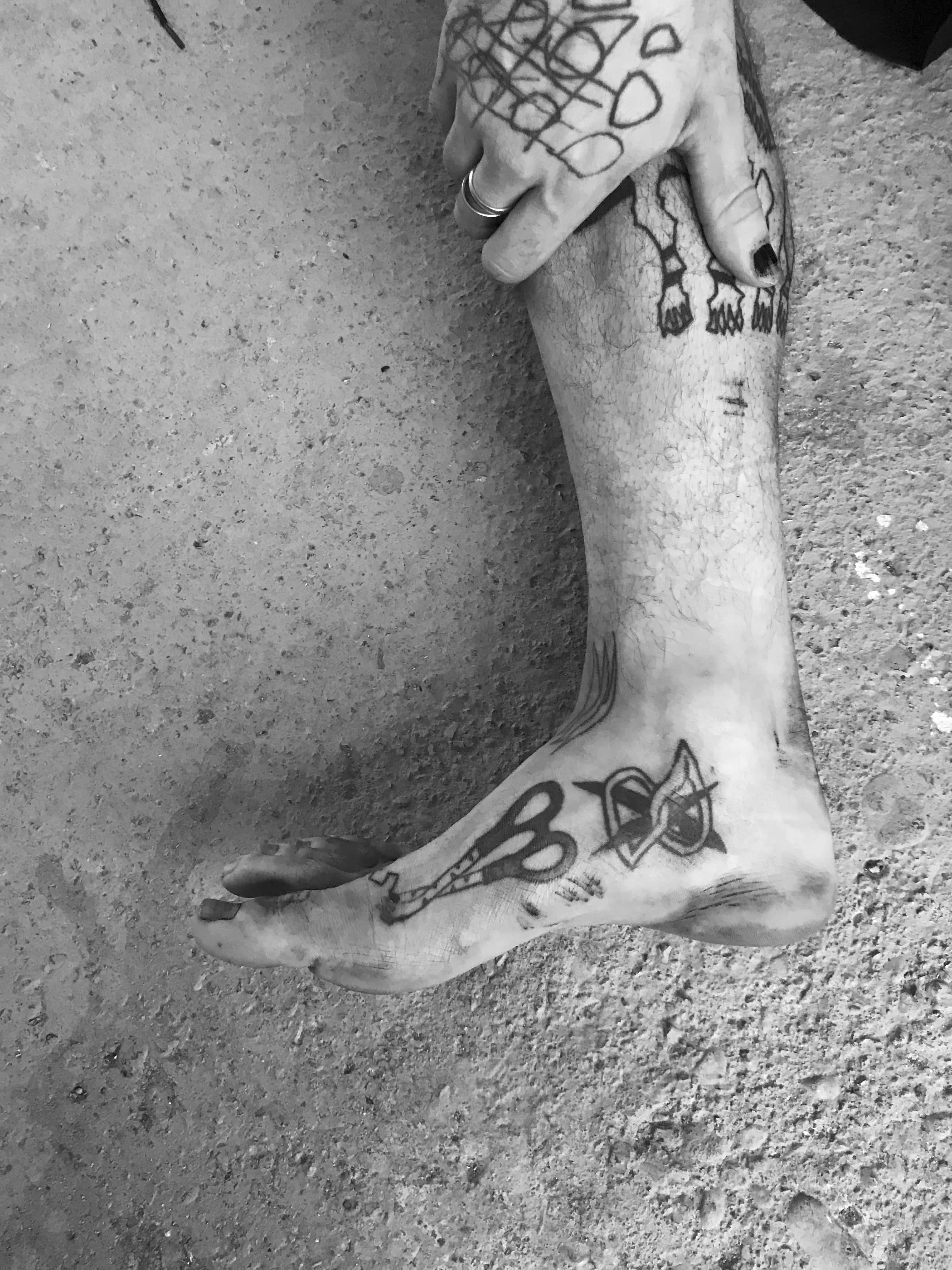 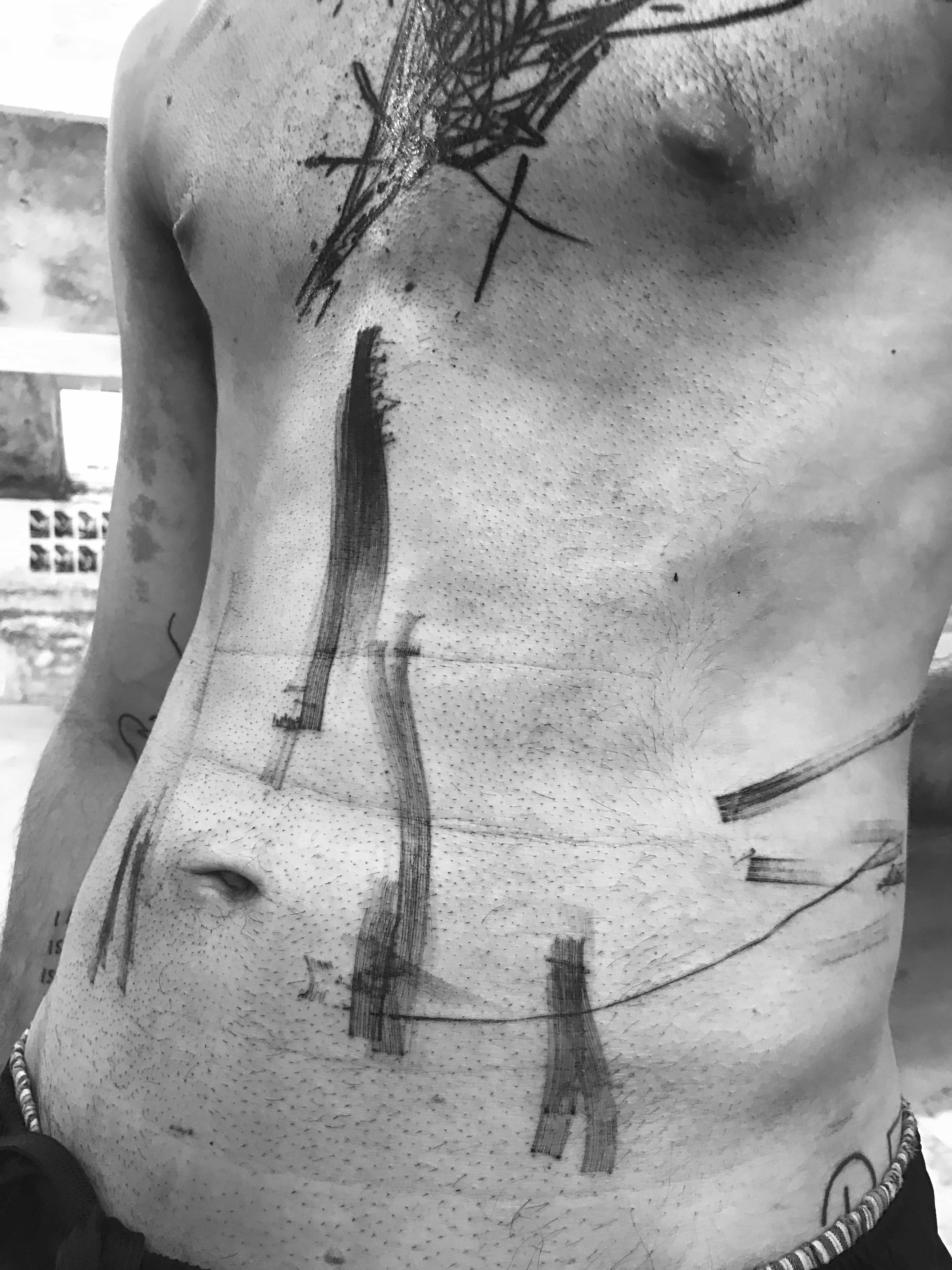 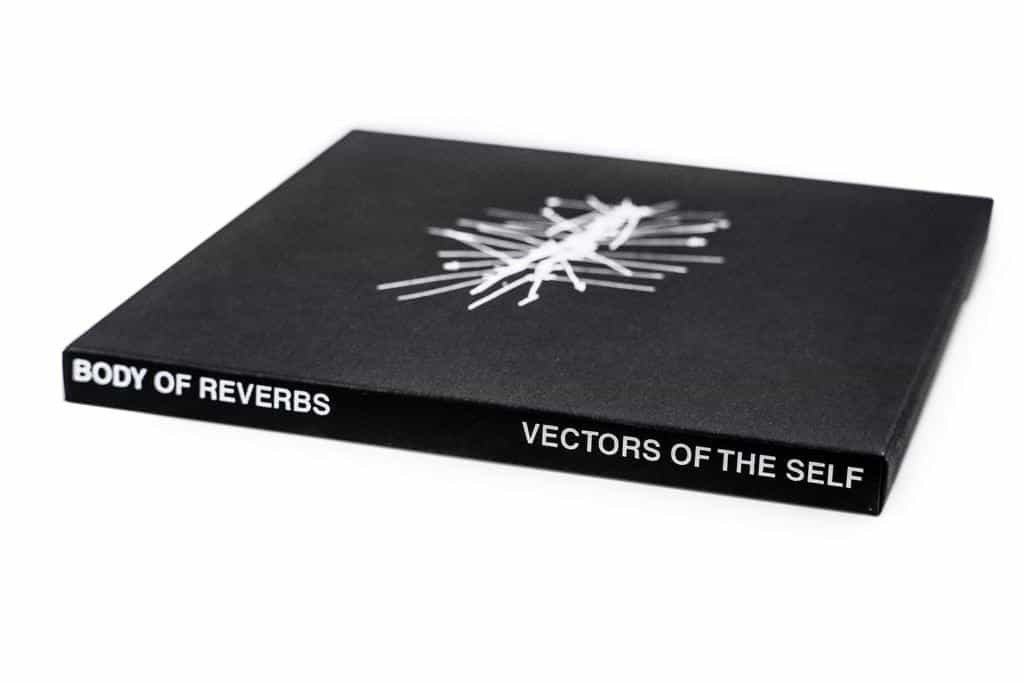 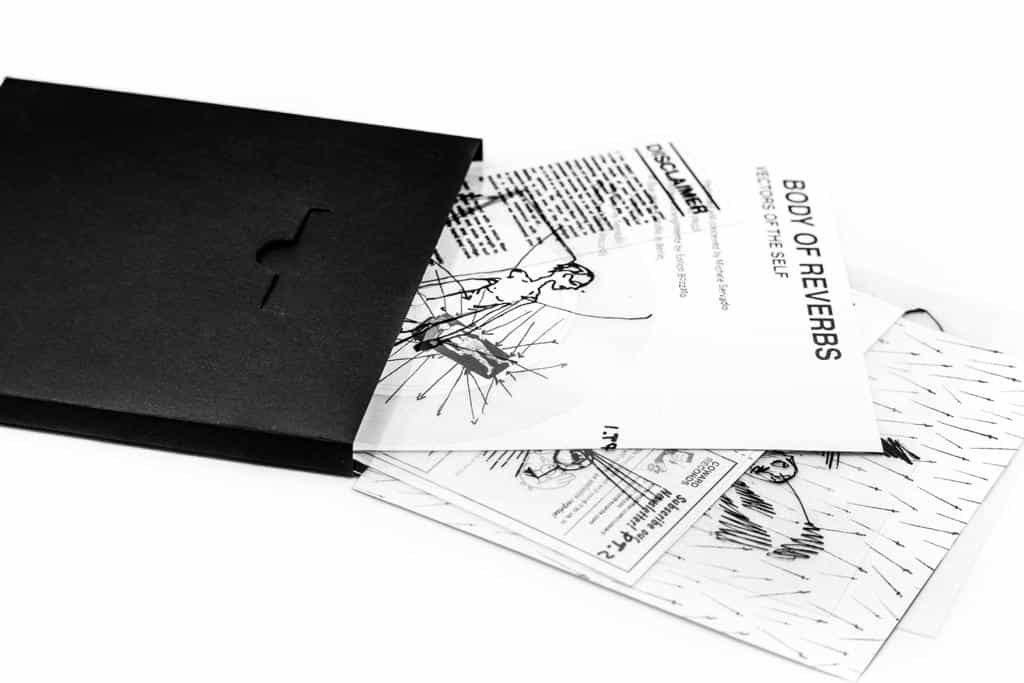 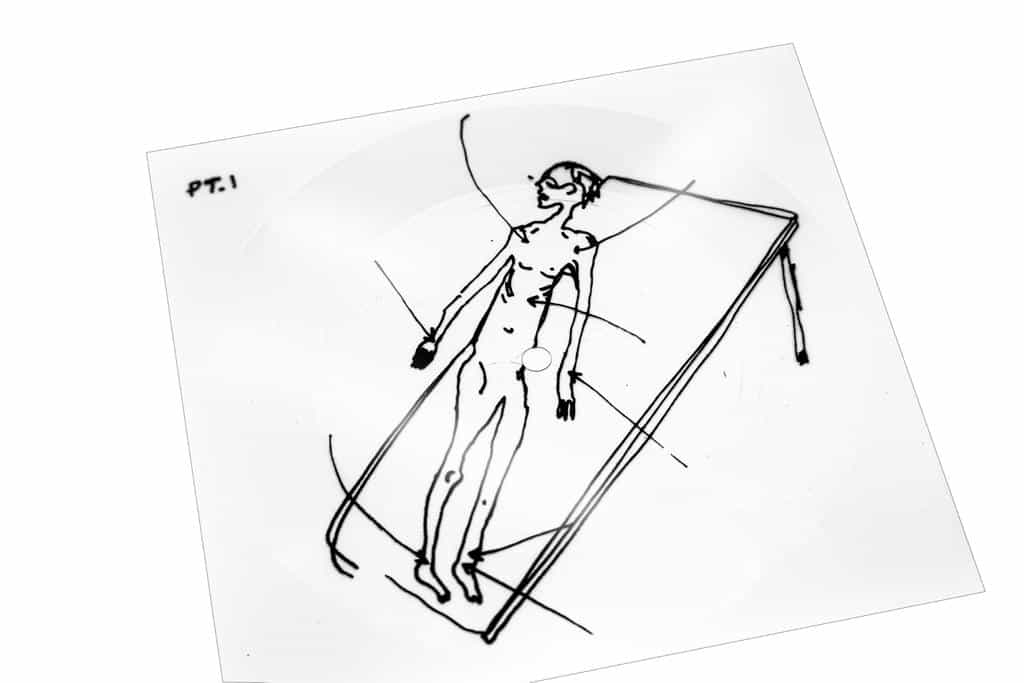 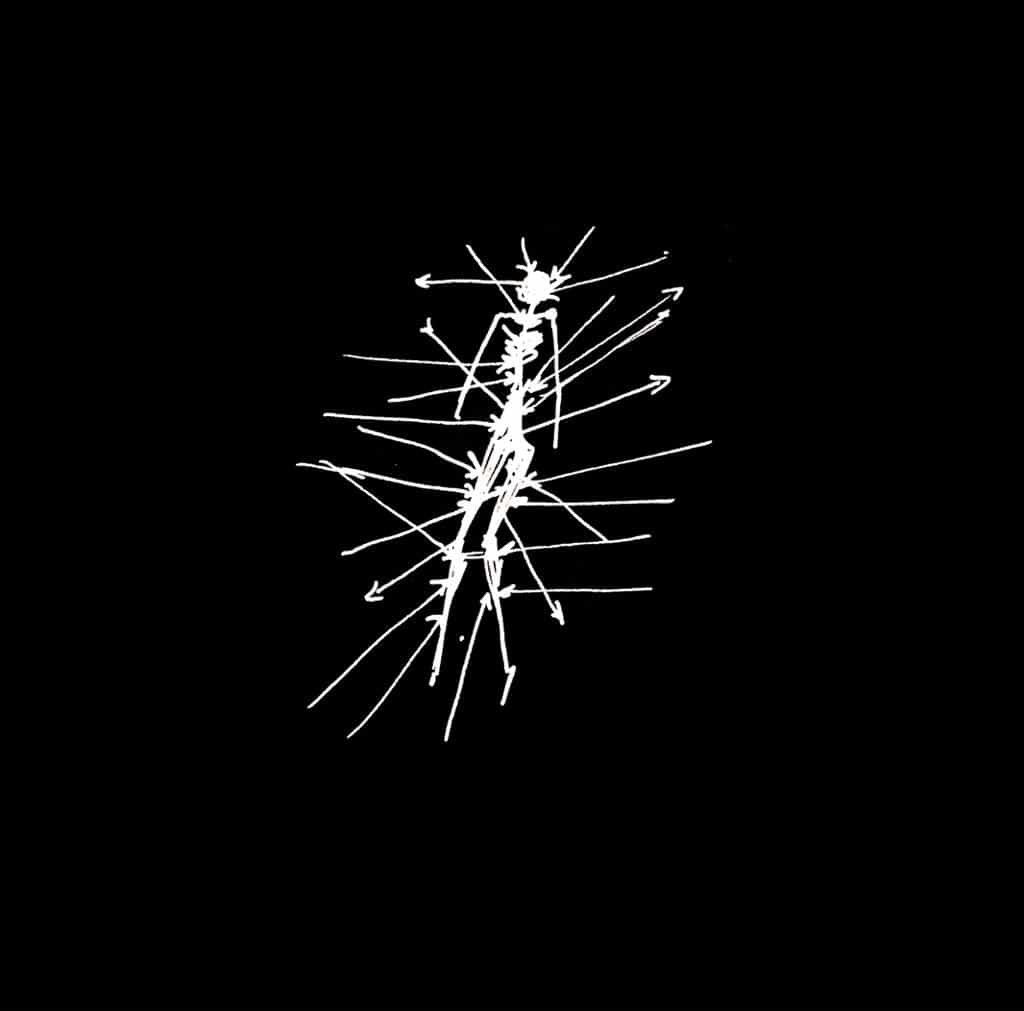 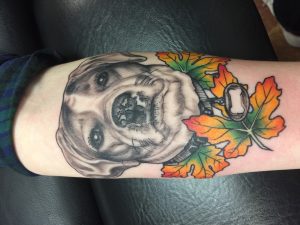 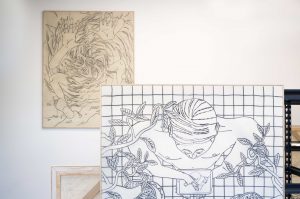 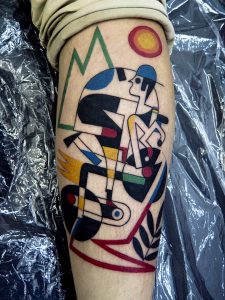