Grace Neutral has been tattooing for ten years and now owns Femme Fatale studio in east London. Neutral grew up with strong, creative women throughout her life, and pays gratitude to the inspiring women, femmes, and queer people she continues to be surrounded by. She discusses her book, NEUTRAL, to be published by TTTISM in September 2019. NEUTRAL presents Grace’s intricate mandalas and patterns, so inspired by flora and deep elements of the “blue print of universe”, alongside personal polaroids spanning her career in tattooing.

What is your name, birthplace, and year of birth?
Grace Neutral, and I was born in Dubai in 1989.

Where did you grow up? Please describe your upbringing and sociocultural background.
I was born and raised in the middle east for the first eight years of my life and then moved back to a small fishing village in southwest England where my family go back generations on both my mother and father’s side. Then I moved around London and Bristol from the age of 13, settling in London independently from the age of 18.

Where do you currently work? Prior to that, where have you worked?
I work in my own studio in east London called Femme Fatale, which houses ten artists and some regular guests.

How long have you been tattooing?
I have been working in the industry for 11 years and tattooing for almost ten. In that time I have worked in some of London’s finest tattoo studios. Starting off in Soho in the busy west end and then moving through a few different shops in east London.

What inspired you to learn tattooing, and how did you initially learn how to tattoo?
I was working in Soho in a tattoo shop doing piercing back in 2009–it was in this shop that I really started getting more and more inspired by the tattooers around me and it’s there where I really realized my dream was to be a tattooer. I had always been creative, used lots of different mediums, and played around with my creativity in whatever capacity it came out. I was also getting tattooed by Xed around this time and he was one of the first people who showed me a thing or two about hand poke tattooing.

Were you trained through a formal apprenticeship? Describe the circumstances of learning.
The studio where I was doing body piercing is where I did an apprenticeship with a very reputable polish woman called Ala who was very involved in the London piercing and body modification industry. Through my knowledge of piercing and being in a tattoo studio every day, I was able to absorb the basic knowledge of a clean tattoo setup, and then through meeting people like Xed I was able to manifest a decent starting block for my tattoo career.

Have you previously studied art in an institutional setting? If so, what level of training did you reach and in what disciplines?
My mother is a silk painter and also does batik, and her sister is a sculptor, so I have been bought up with some very creative women who always encouraged me when it came to art. I left school at 15 and went to art college to study fine art and photography, but dropped out after about a year (I was never a fan of school and a classic structured teaching setting was never appealing to me). After that I did a course in prosthetics and special effects makeup which I managed to finish and out of it got a job as a sculptor at Madame Tussauds. This job didn’t last long as the desire to get into the body modification and tattoo industry took over.

How did you develop your style? How would you describe it? What are your influences?
My style of tattooing is all inspired by nature (flora) and the things I have seen on psilocybin vision quests. Trying to breakdown the blue print of the universe and recreate it through my tattooing has been such a pleasurable journey and task.

Have you had or do you have plans to take on apprentices?
I apprenticed my partner who expressed to me his dream of tattooing. It wasn’t something I thought I would do any time soon because in the grand scheme of things, I haven’t been tattooing very long, but when your partner expresses a need to learn something you do what you can to facilitate that. So, for the past two years I have been teaching him all I know about hand poke tattooing. It’s been testing on so many levels because it’s a great responsibility to teach someone a trade like tattooing and so many things can go wrong if the energy between mentor and student isn’t right. Hard work and his natural artistic talent have made for a relatively smooth ride and I’m proud of the tattooer he is becoming.

What do you look for in a shop?
I have worked in a lot of amazing shops over the years and each place had so many qualities that I took away and applied to my own studio. The main goal when I opened Femme Fatale two years ago was to create an environment that was safe, fun and an inclusive experience for everyone, whether you, are a seasoned veteran of tattooing or coming to get your first, I wanted everyone to be treated with the same respect. I’m proud to say I have accomplished this but not without the help of my amazing team who inspire me every day and have helped me make FF what it is today.

What inspires you generally?
I’m lucky to live in London which has served a huge source of inspiration to me over the years; the people, the diversity, and the harshness of the city have always played a part in my journey to be the best person, artist, and tattooer I can be. I also am blessed to be around so many inspiring women, femmes, and queer people on a daily basis, who teach me new lessons of love and respect crucial to my growth in self-love and gaining a higher consciousness.

Are any other forms of media, traditional or digital, important to your work?
I have found that Instagram has played the biggest part in help to expose my art to the world. It’s a huge reason why I have been able to stay doing what I have been doing for so long. Having a free online portfolio that anyone can access at any time is an incredible tool for all of us tattooers to possess.

Is traveling important to you? If so, where do you usually travel? Do you have any interesting experiences abroad that you can share?
Travelling has been a massive part of my growth as a person and as an artist. Traveling the world and working with so many different artists in so many different cultural settings has made a massive impact on me as a tattooer and creative. I have been doing guest spots all over the world for seven to eight years. In the past few years I have been a regular guest in LA at my friend Norm’s shop Love Letters, which has played a huge part in my evolution in tattooing. I also had the privilege to travel the world specifically to learn about the cultural differences within tattooing. Through this I got to experience traditional Maori tattooing and traditions in New Zealand, hang out with chicano gangsters and learn the origins of fine line black and grey tattooing. I’ve also been to Japan to hang out with older generations of tattooers, learning about the traditional Tebori technique and the history of tattooing and the yakuza….as well as many more amazing experiences.

Ideally, how would you like to see tattooing evolve? How do you think it will evolve realistically?
As far as the future of tattooing, I don’t know what’s going to happen. It could keep growing into this mass conglomerate and people who don’t even practice the art of tattooing will continue to capitalize off the back of it, or it will do a 360 and when the fashion of tattooing has died out it will go back to being this backdoor, secret, magical world. For me personally, I wish for a happy medium of both.

"Trying to breakdown the blue print of the universe and recreate it through my tattooing has been such a pleasurable journey and task."

Please can you tell us more about your upcoming publication, NEUTRAL with TTTISM? What should people expect?
I’m very excited to be doing my first publication of all my tattoo designs with TTTISM. This book will be a time capsule of some of my designs from the past five years. I just want it to be a source of eye candy for anyone who might be seeking some symmetrical dreams.

What was your aim with the book? What were you thinking about when you first conceived the idea?
The aim of this book was to create something that indulges your vision and feels good on your fingertips. Being able to have a beautiful capsule of all my creative outbursts gives me a huge sense of pride and belonging. 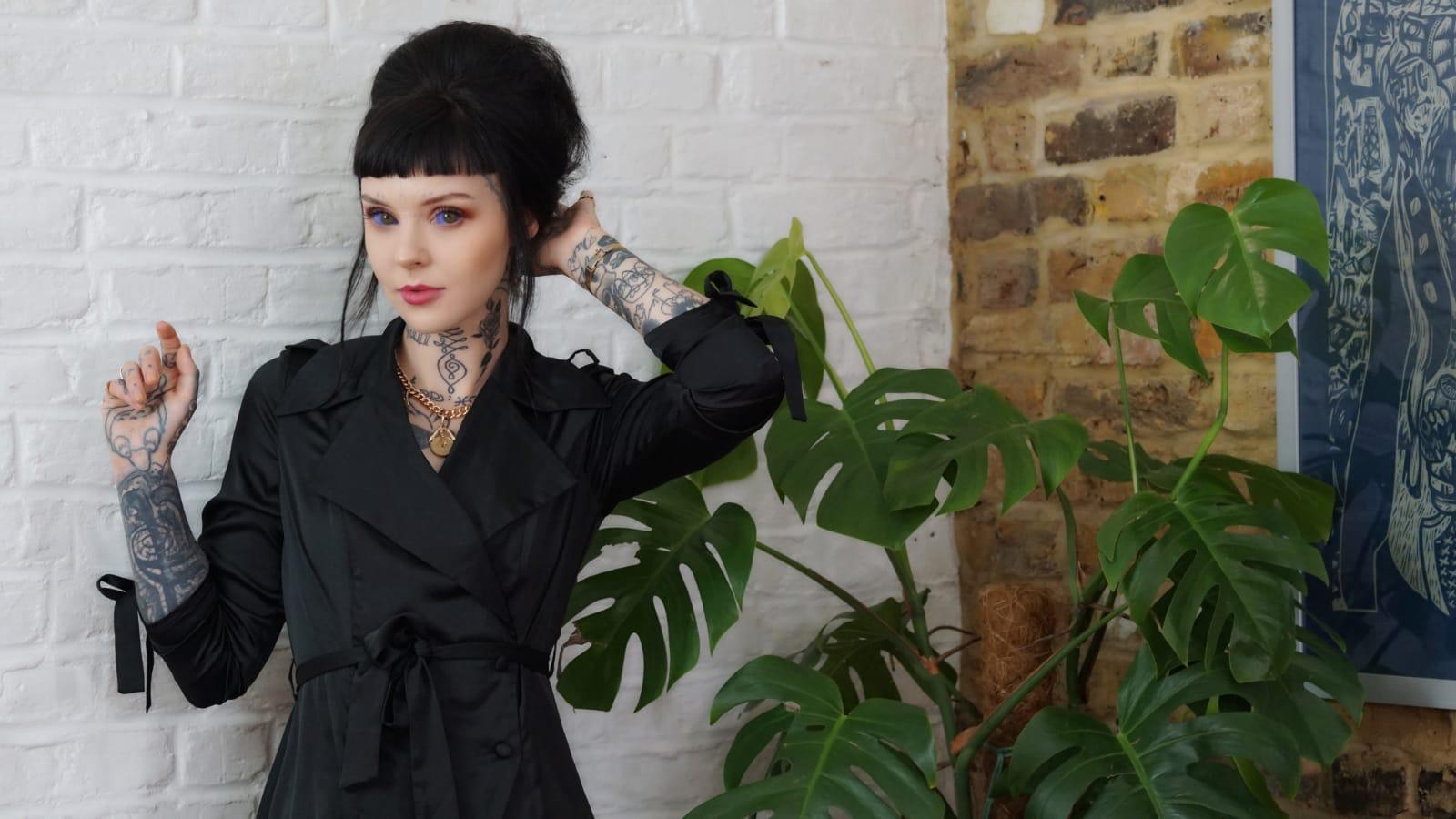 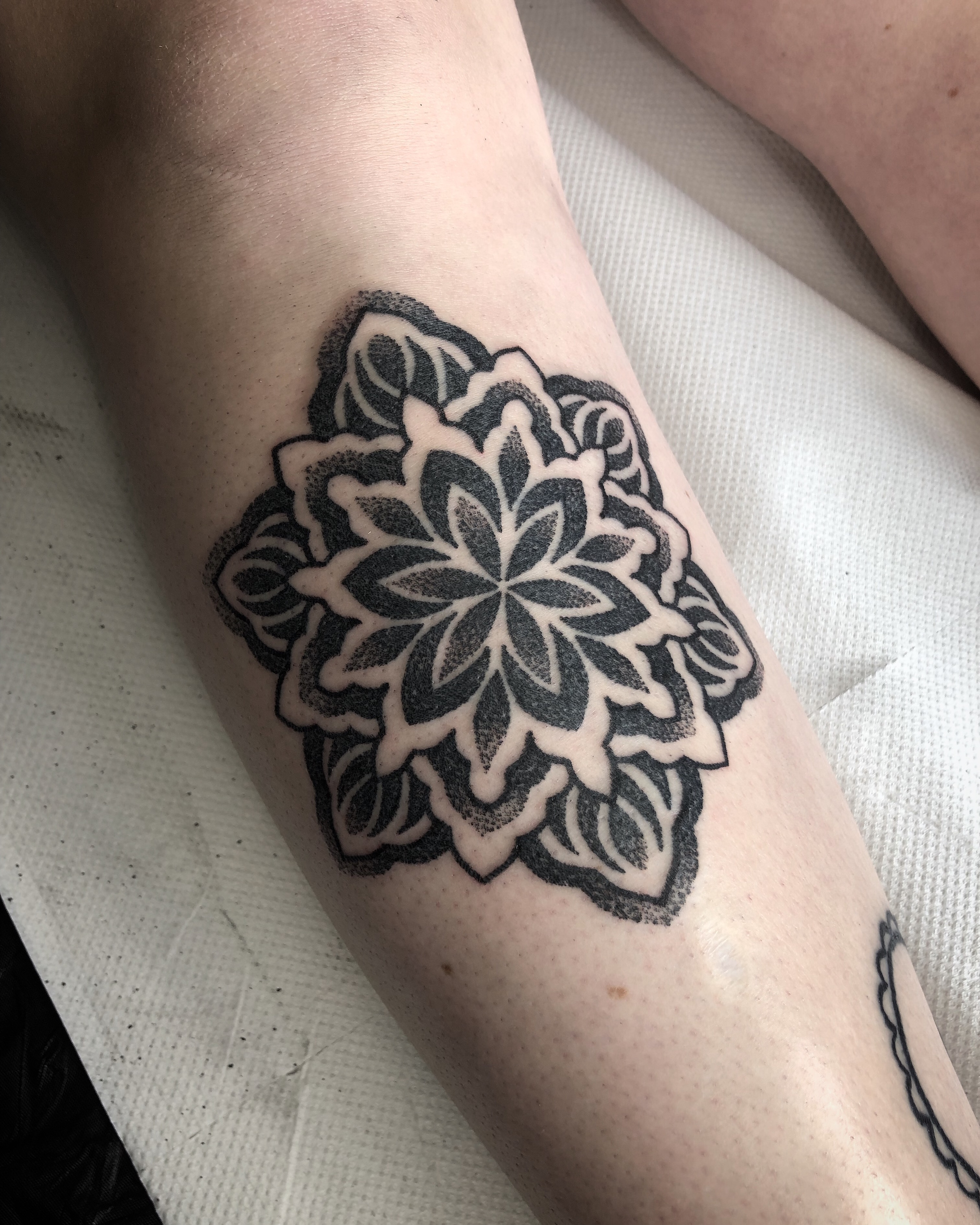 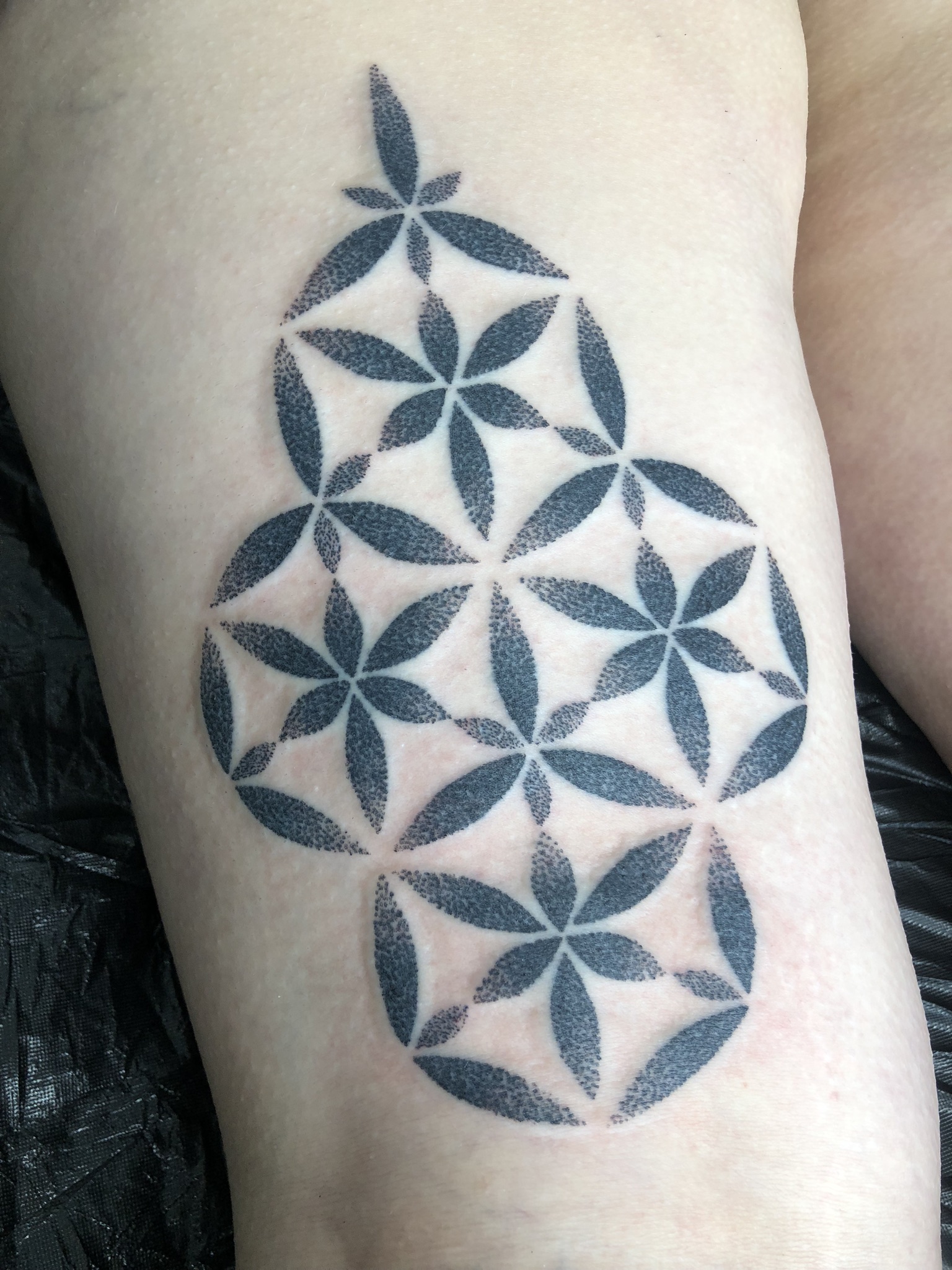 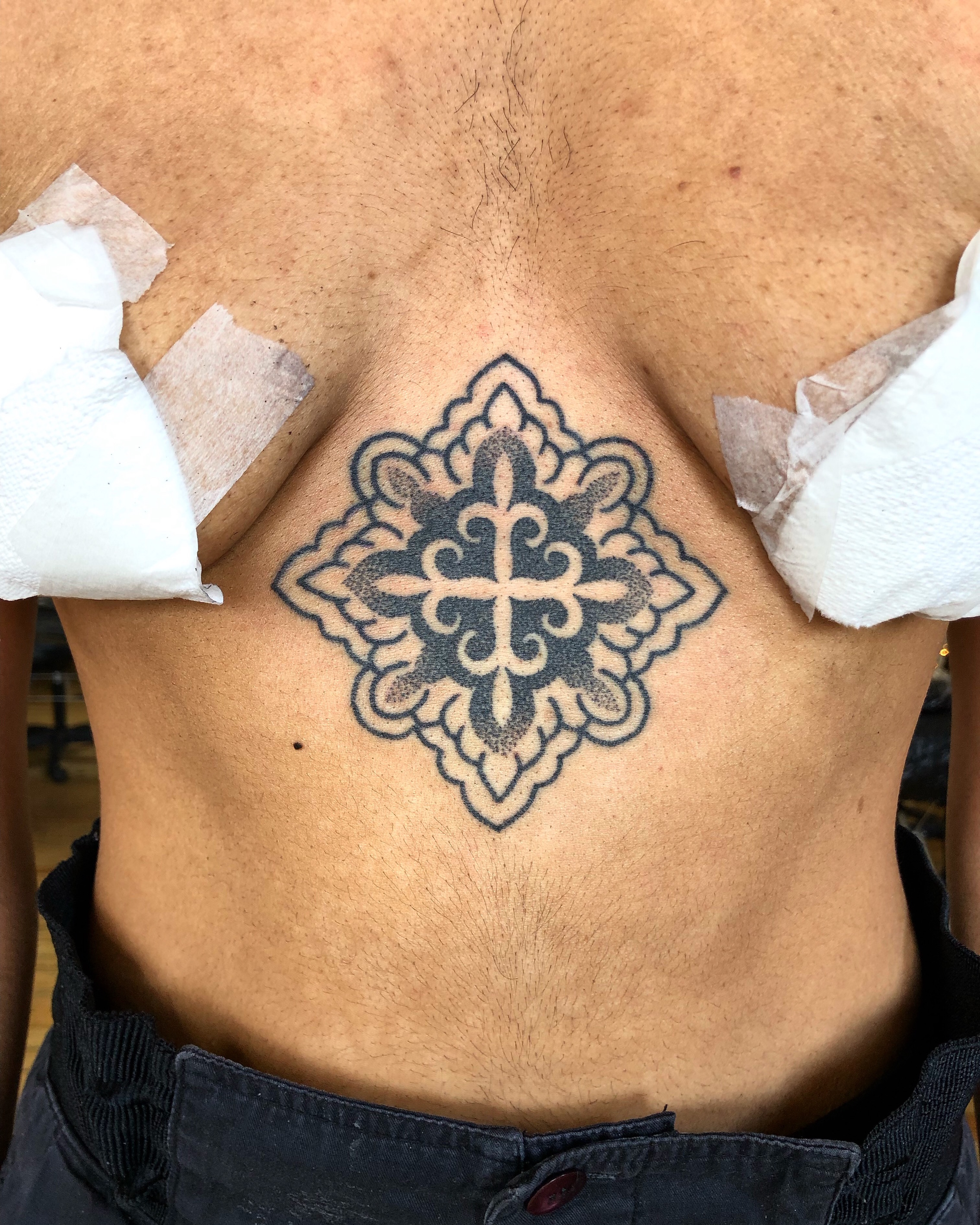 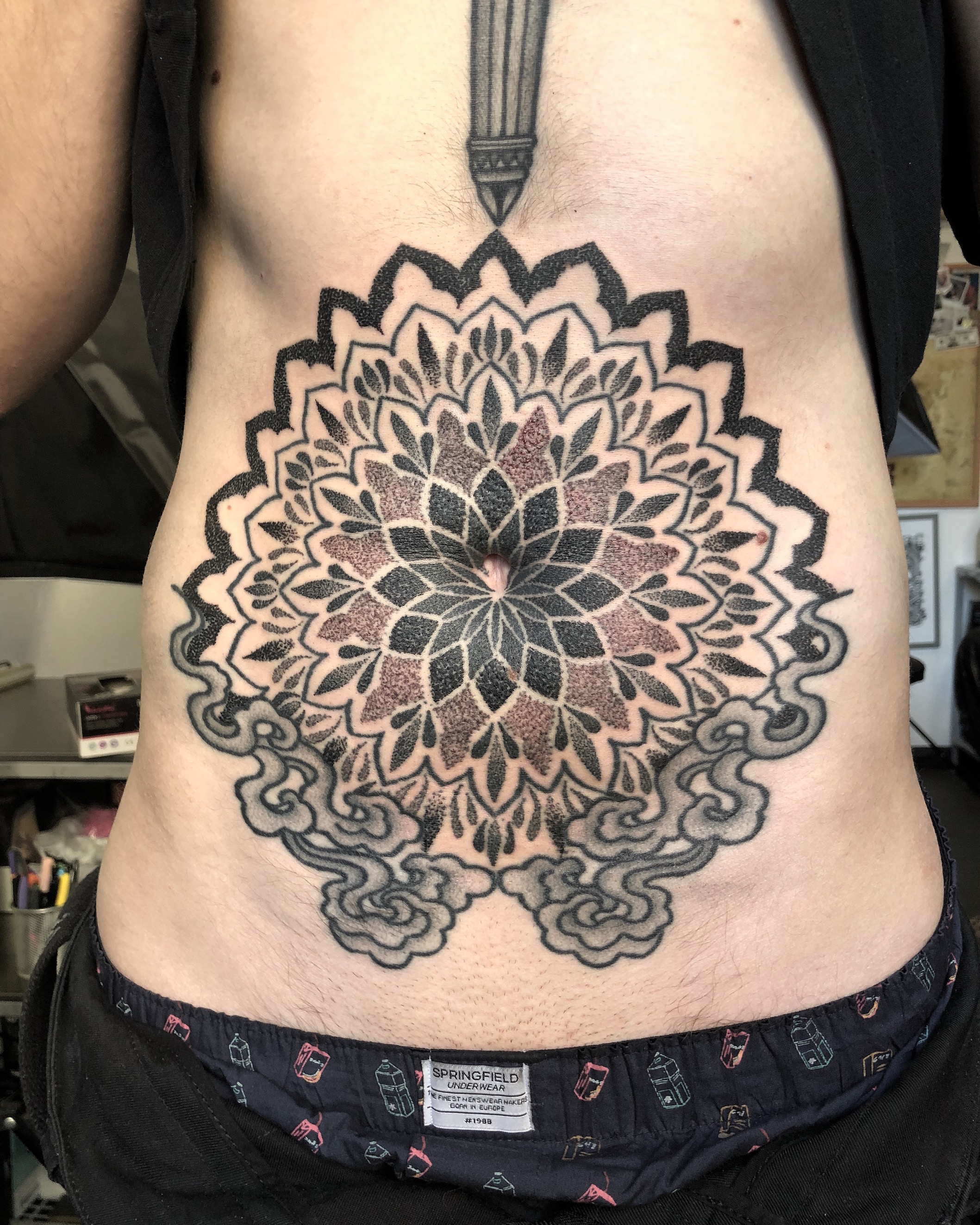 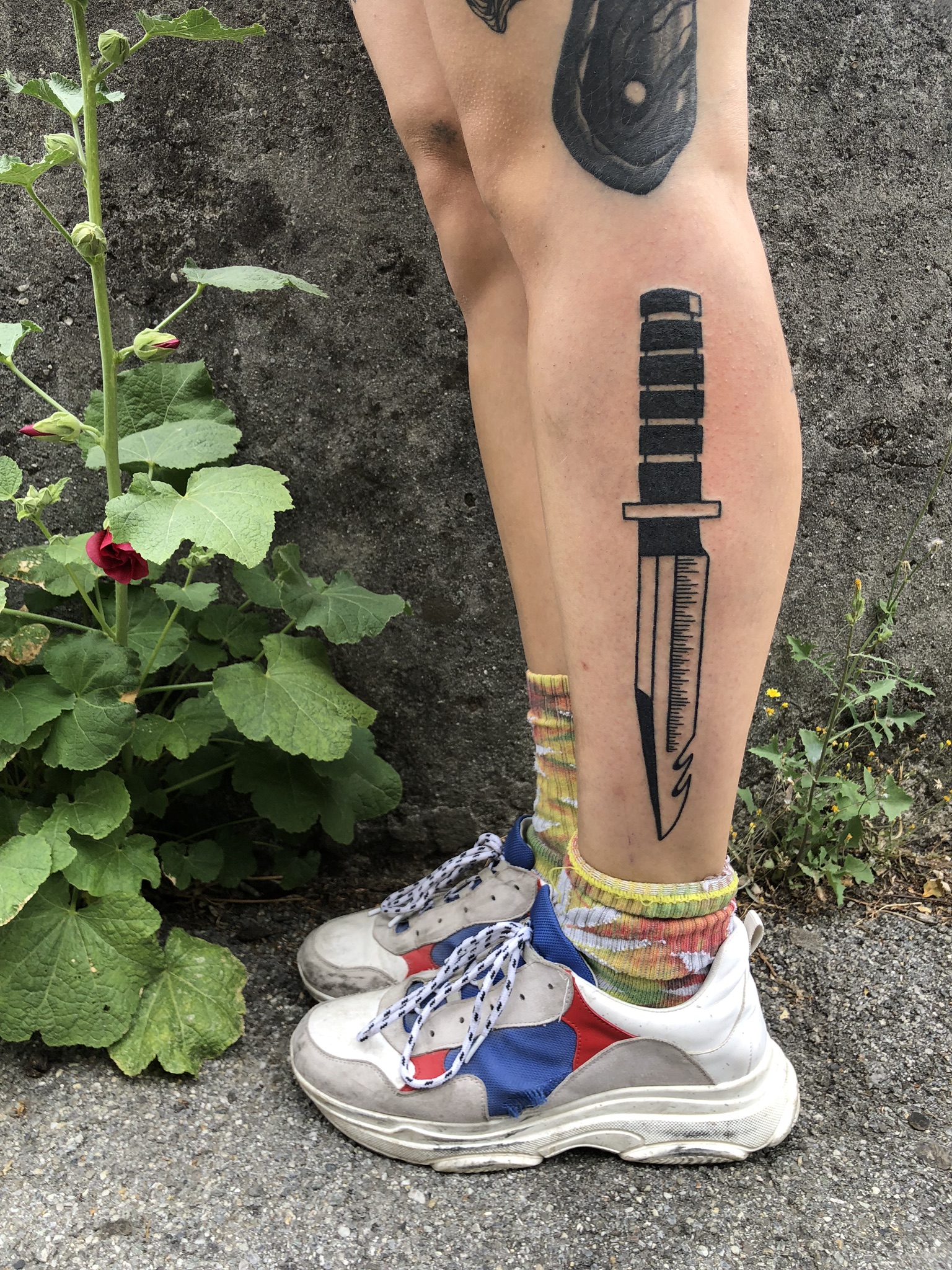 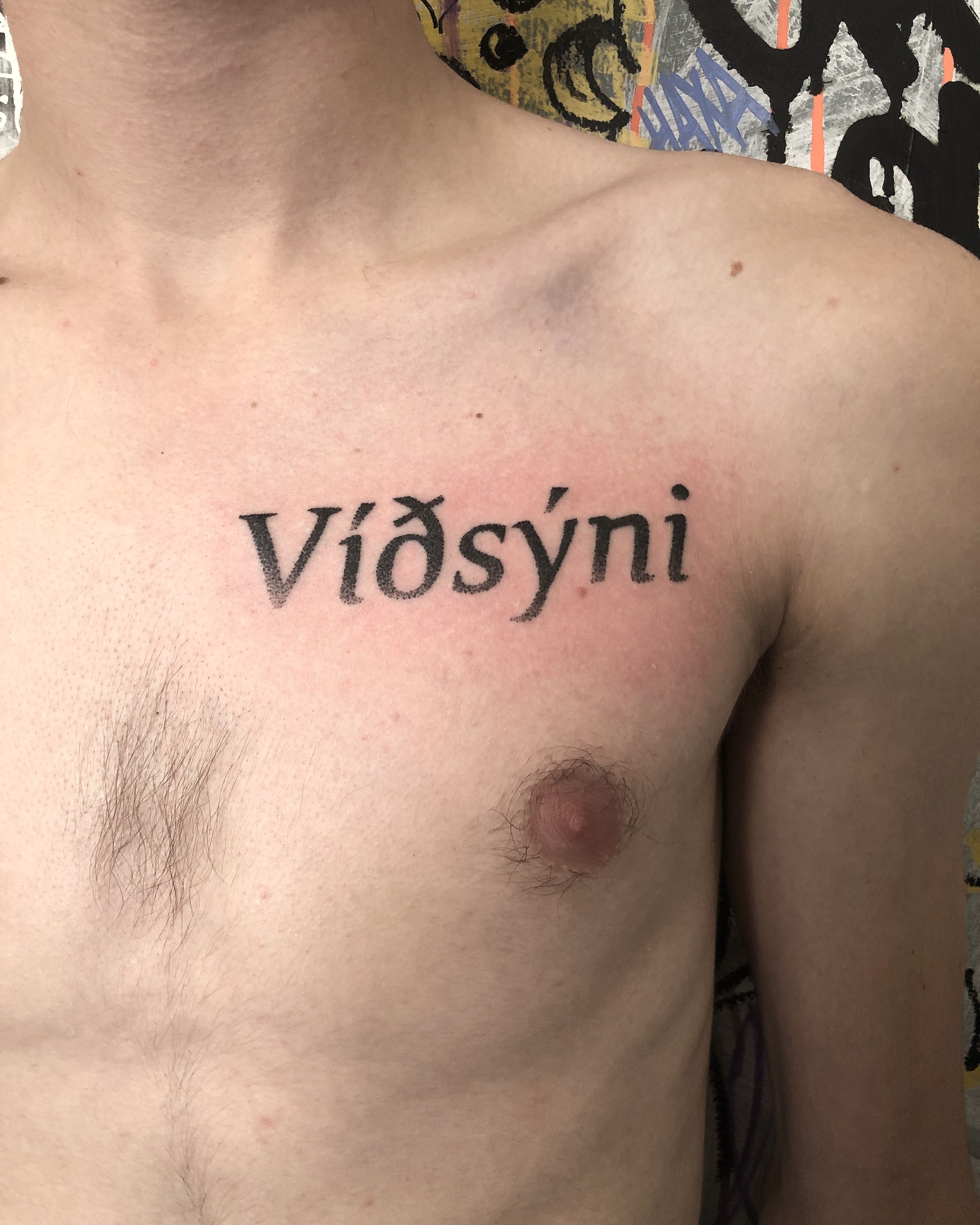 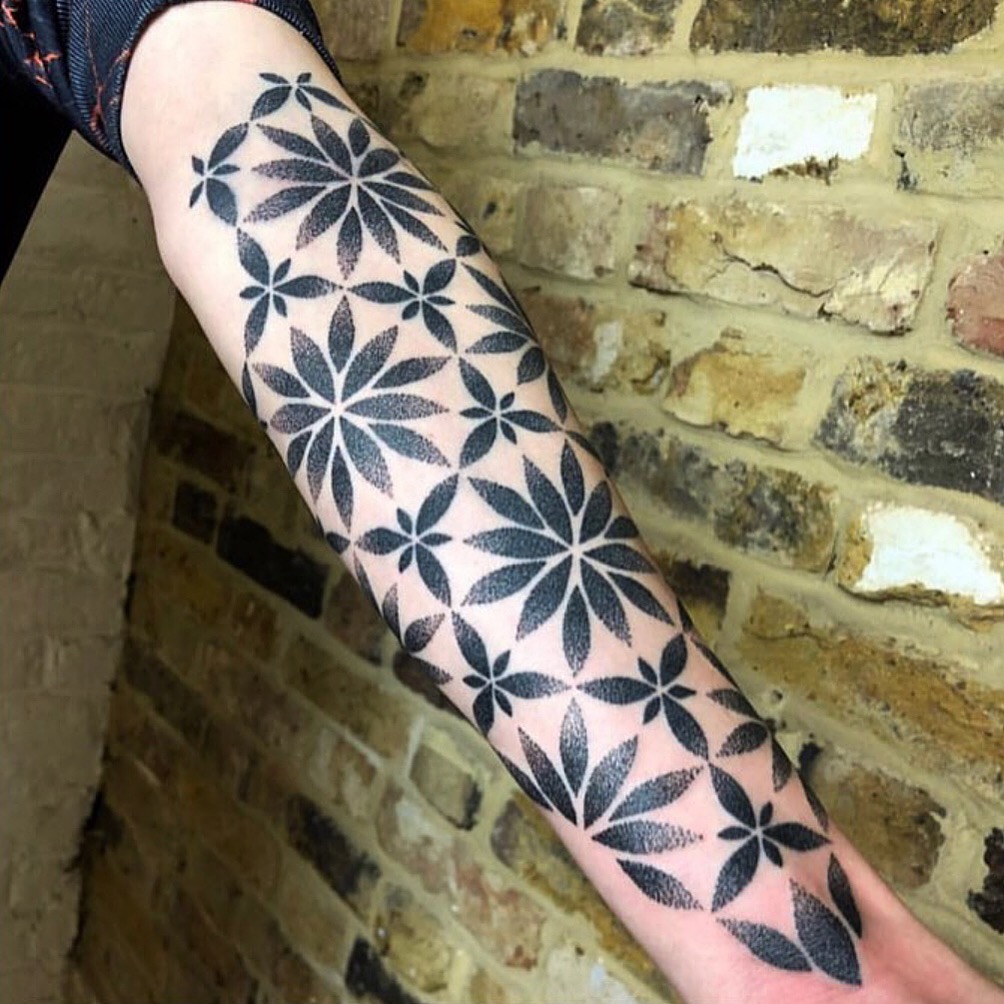 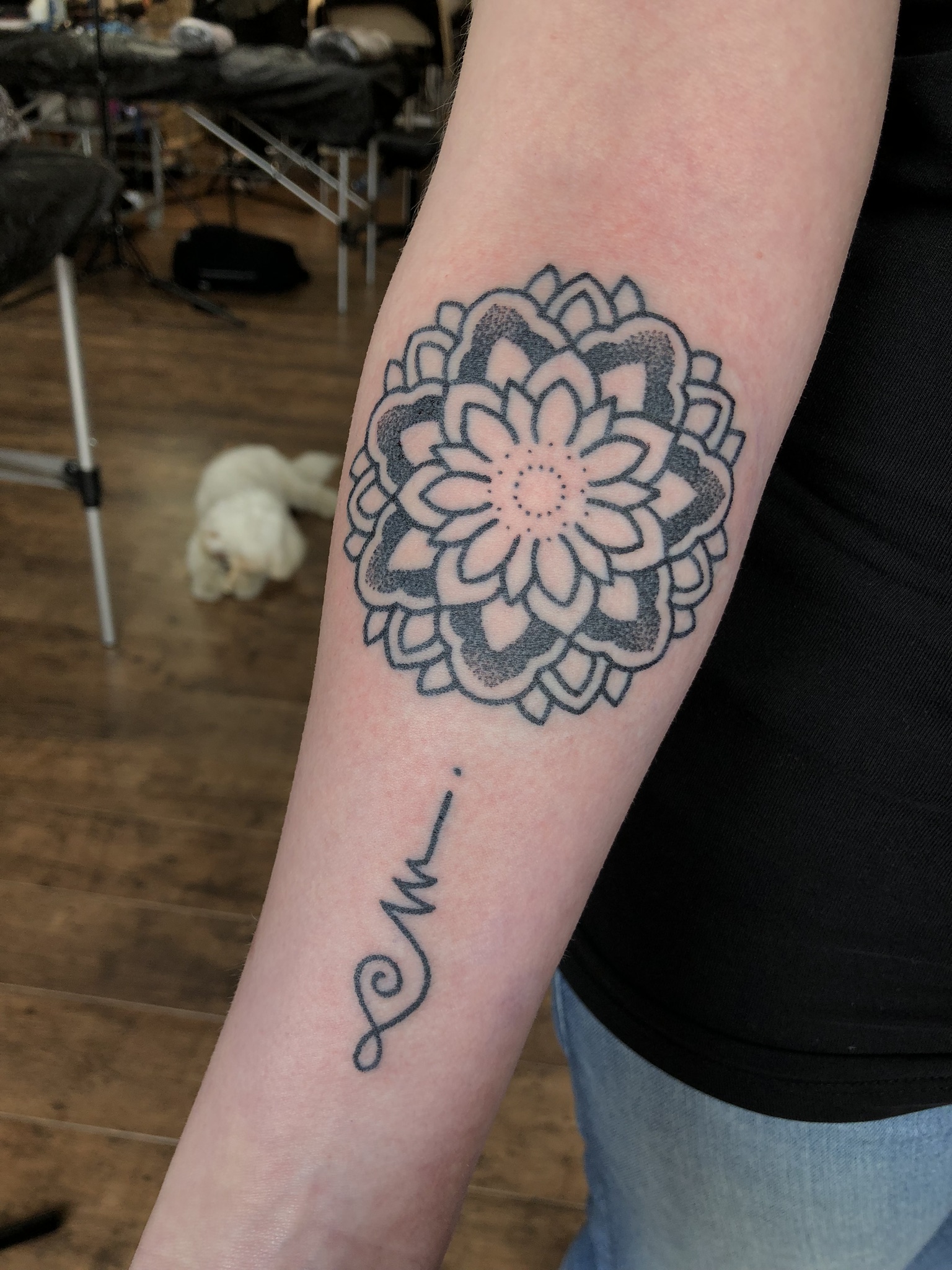 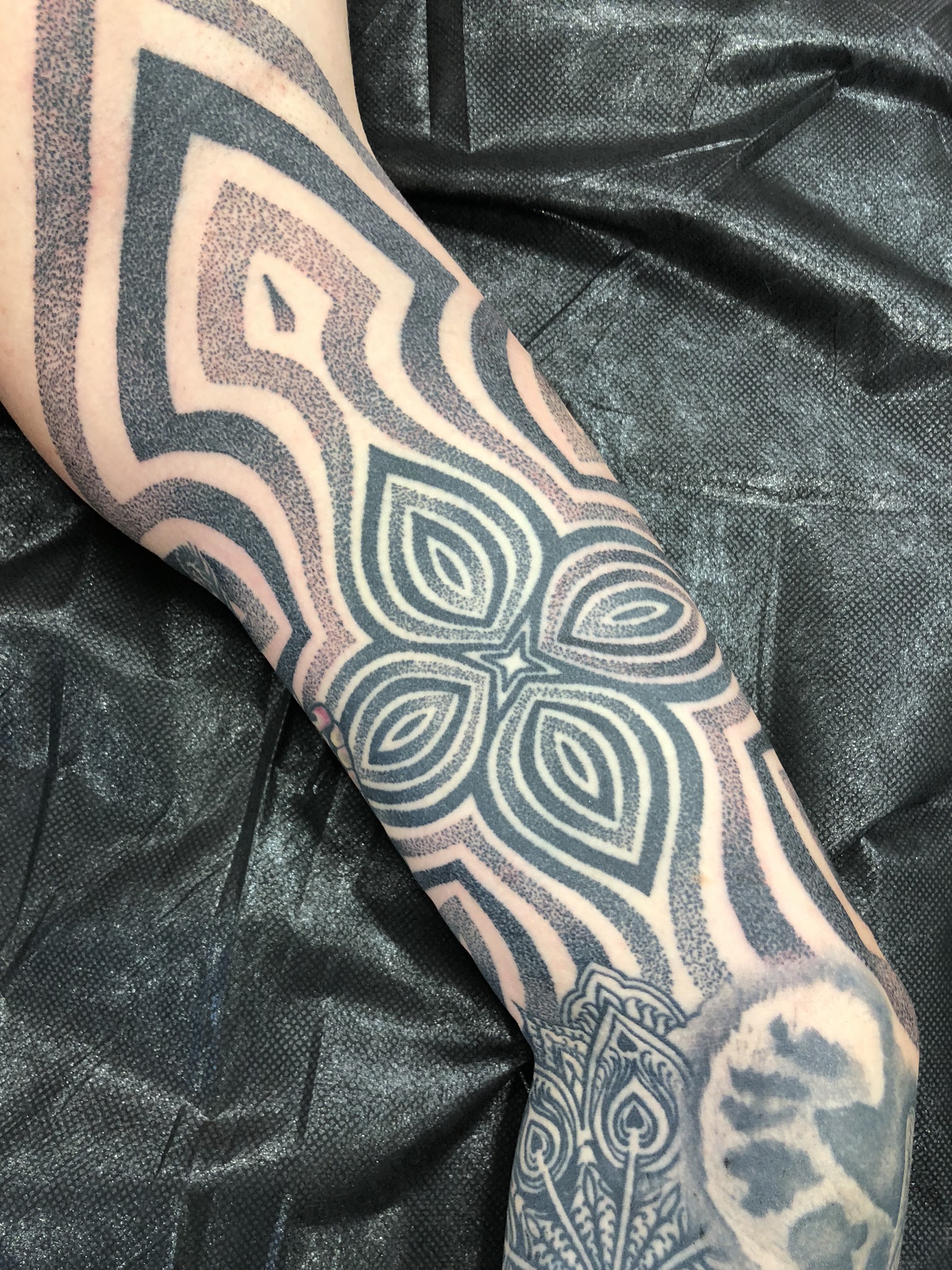 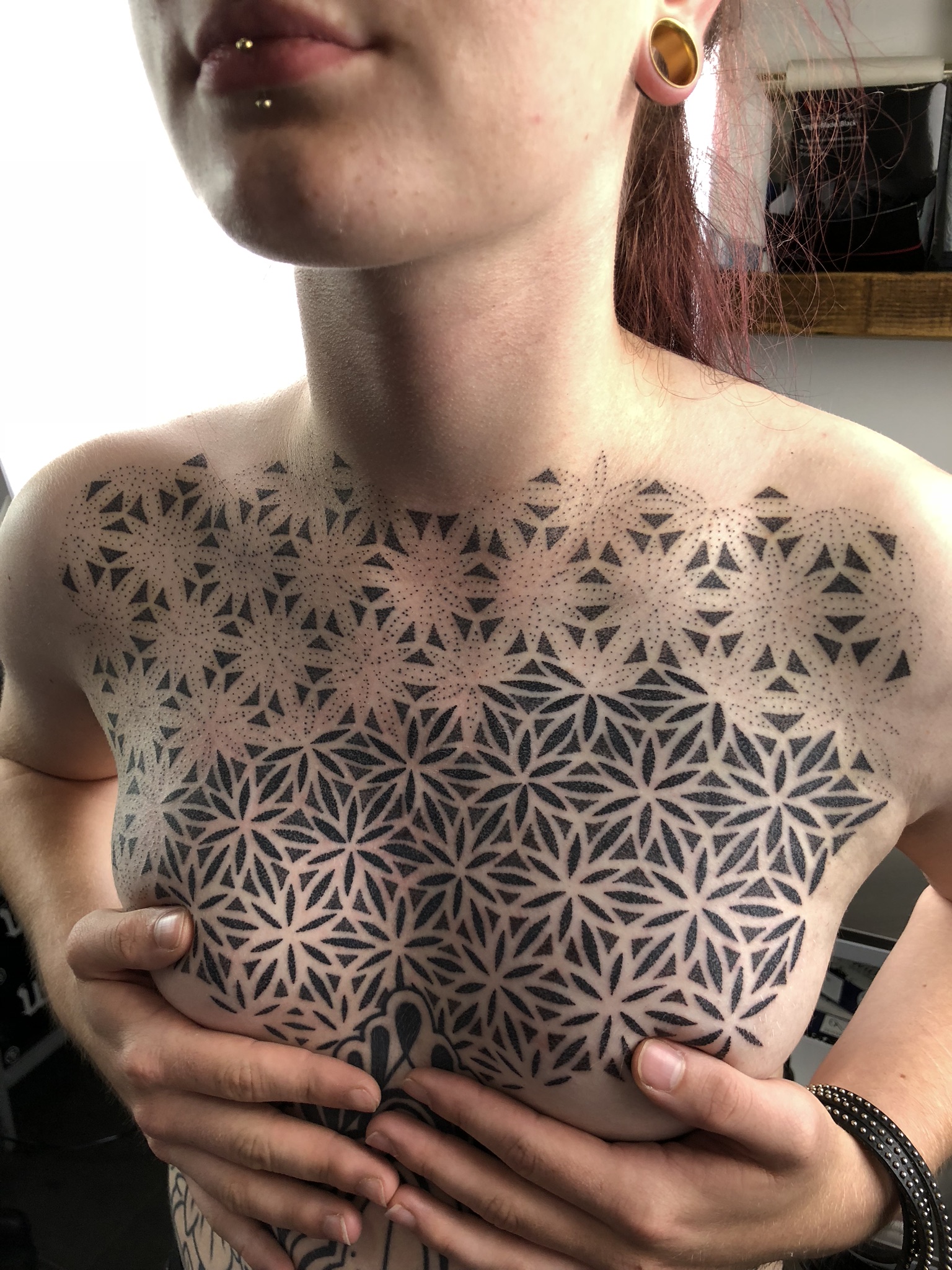 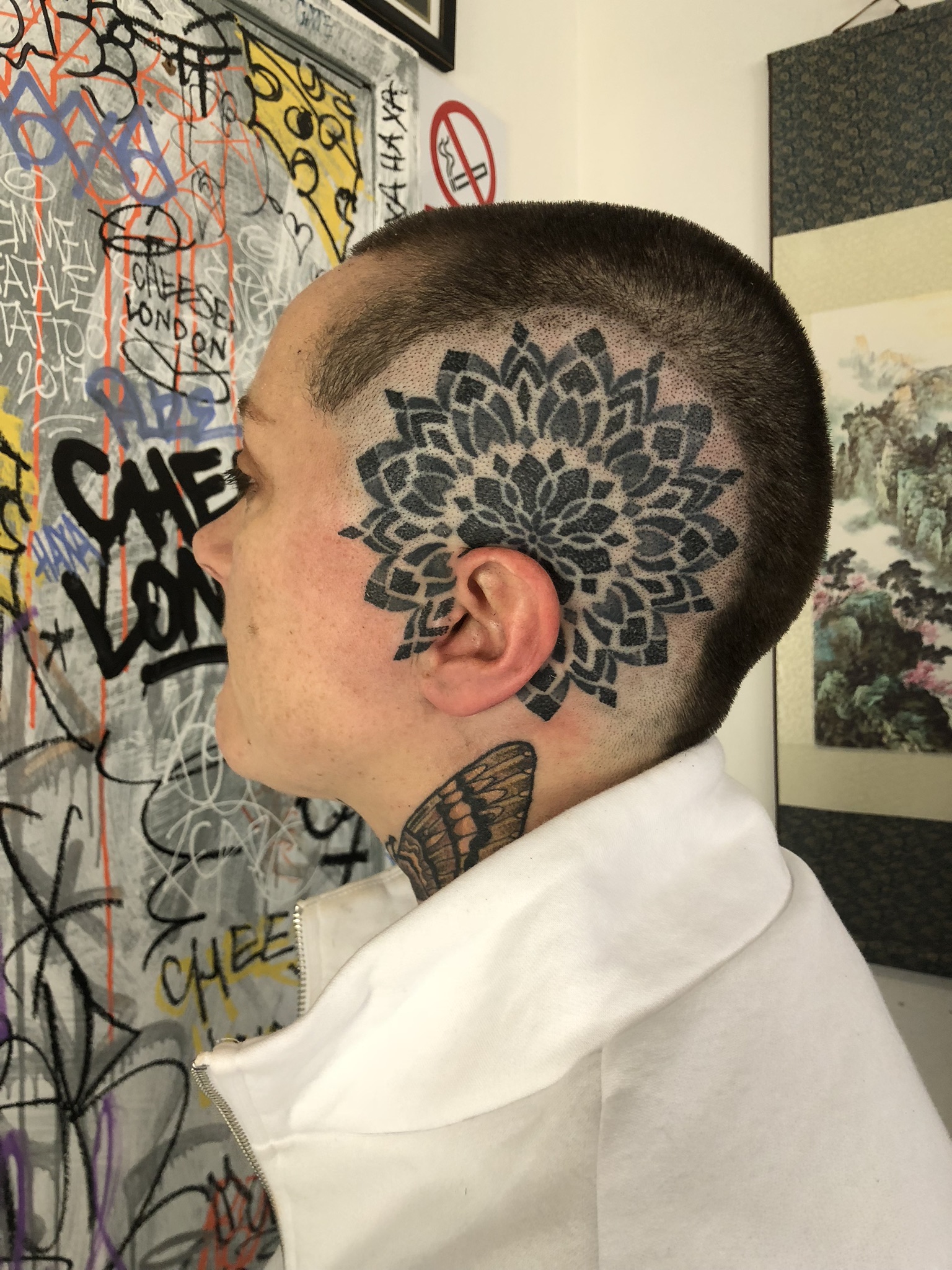 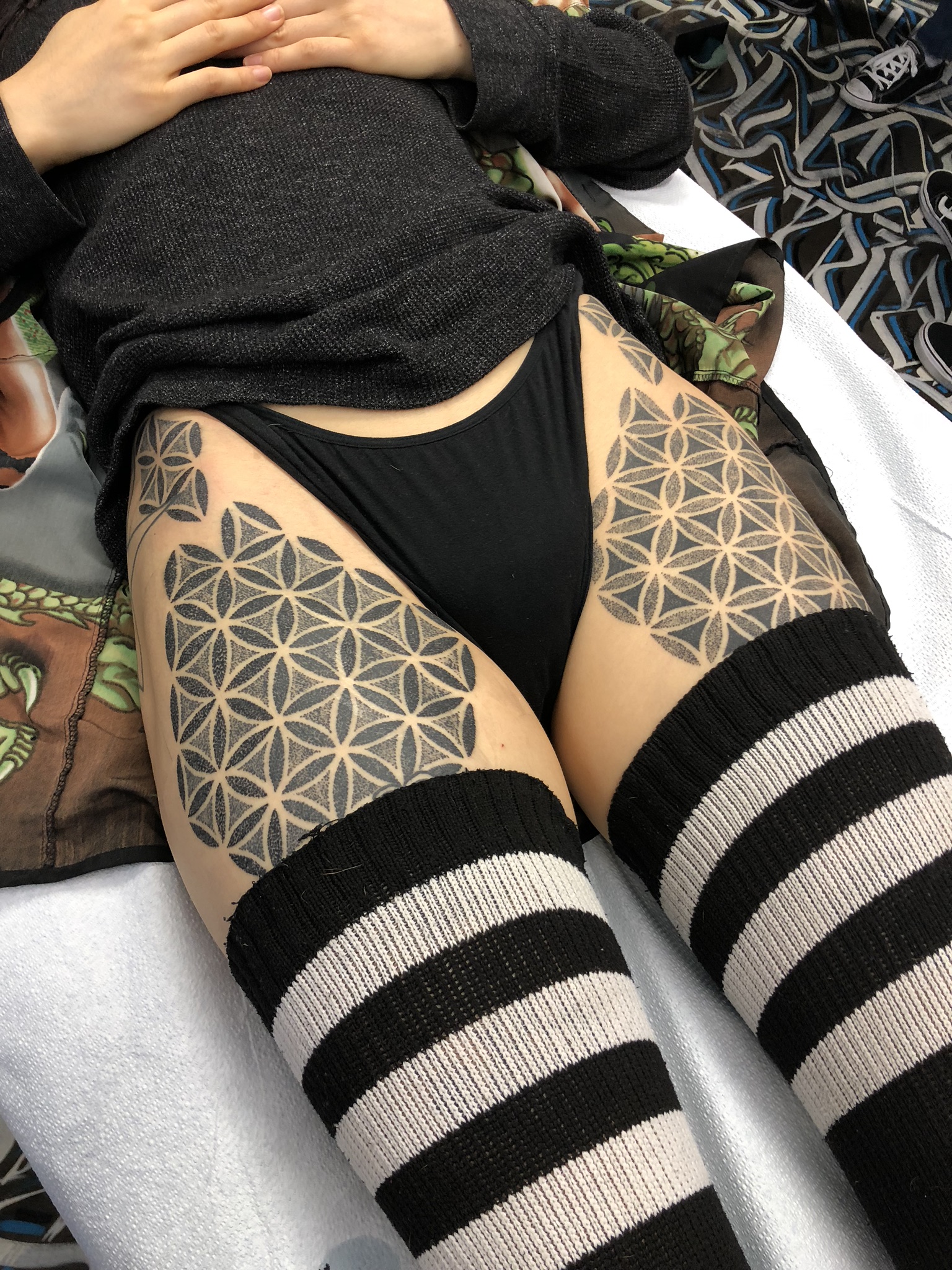 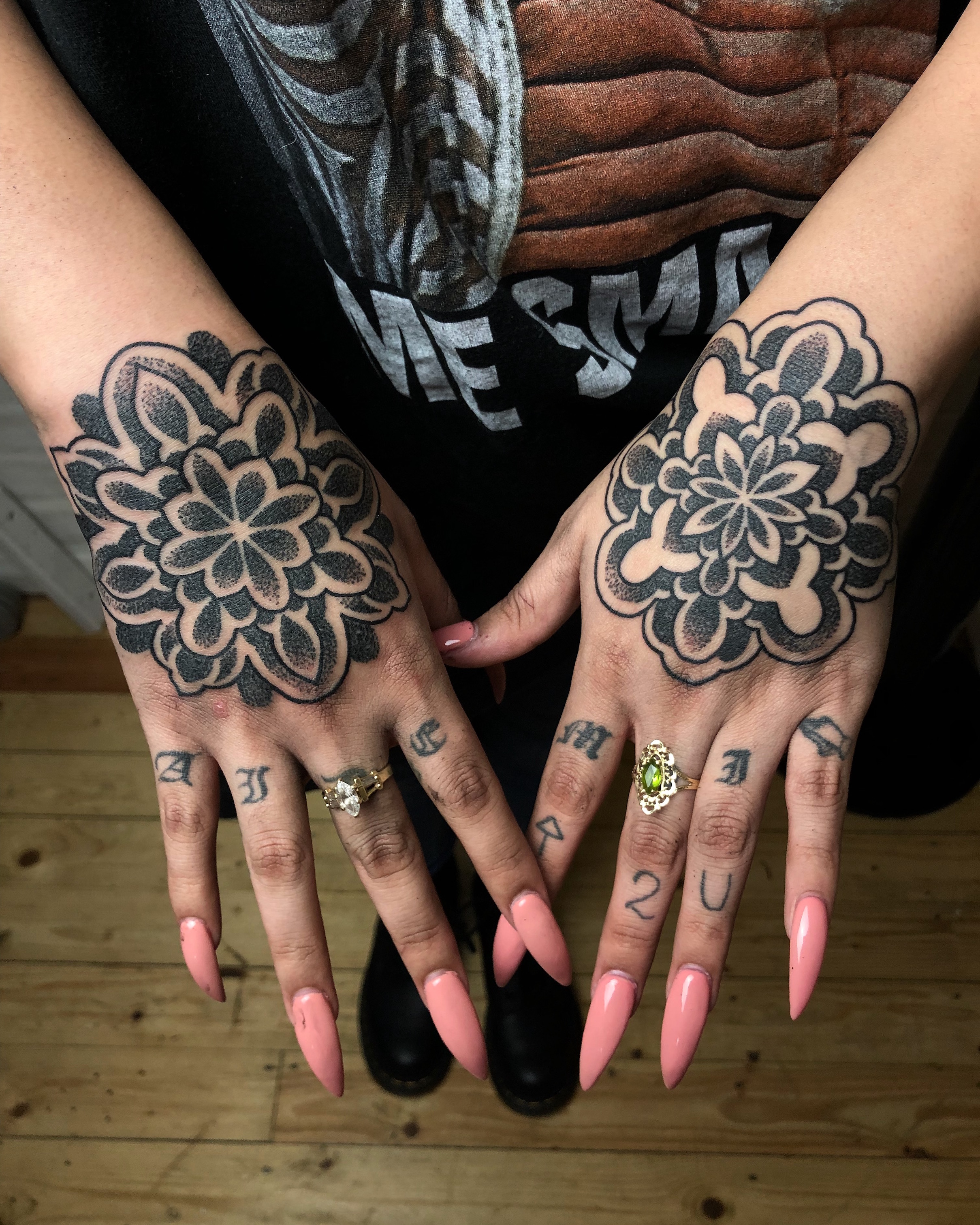 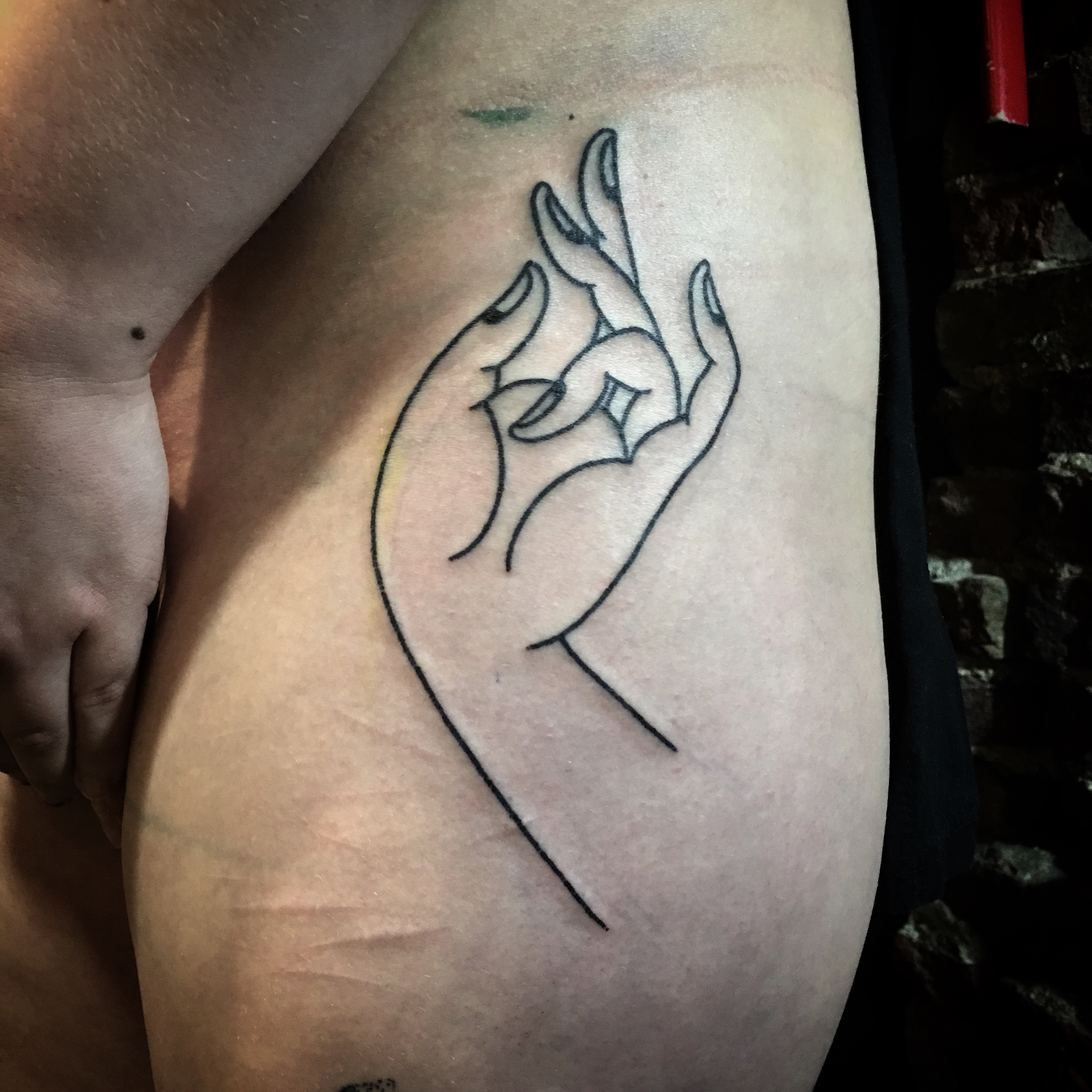 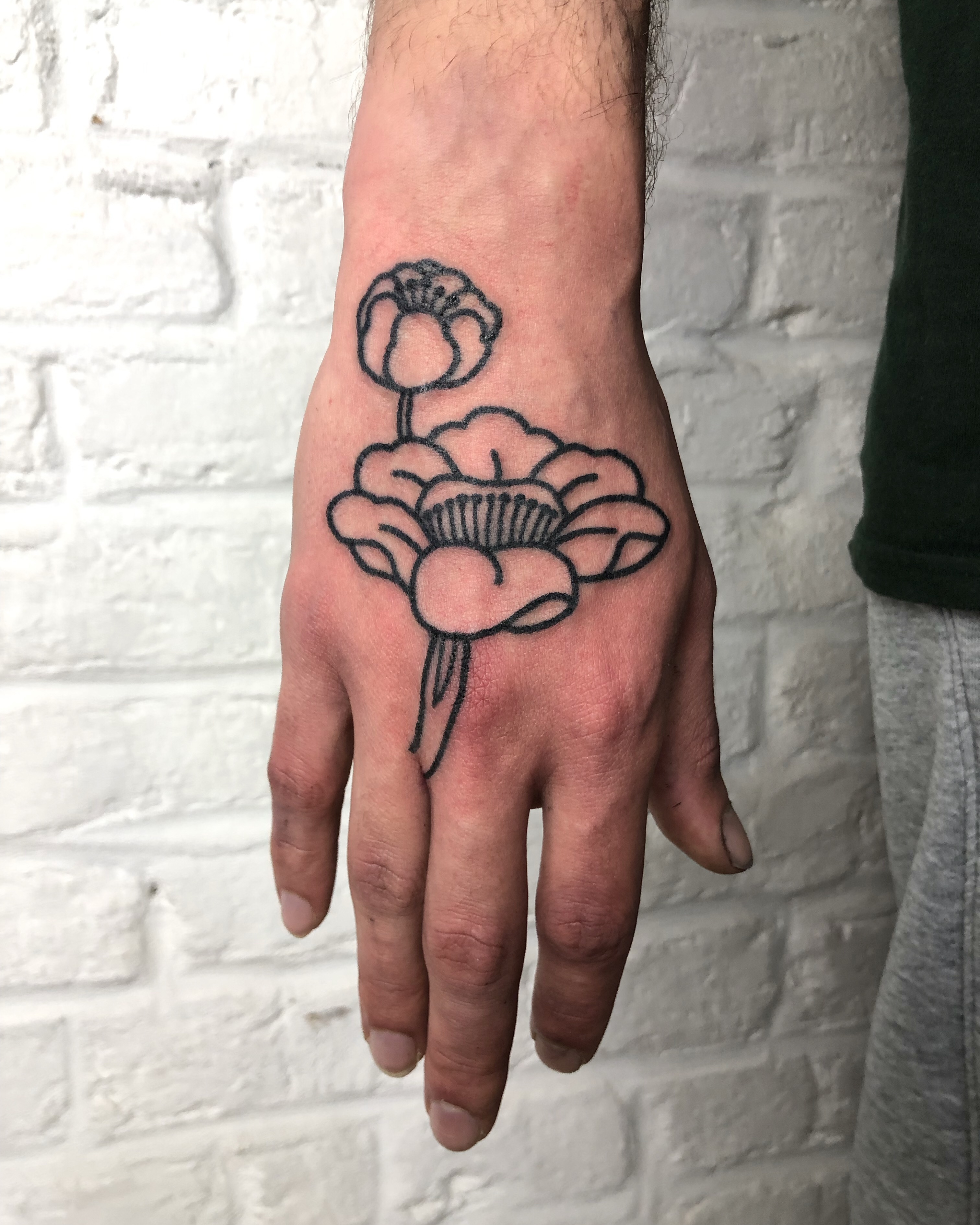 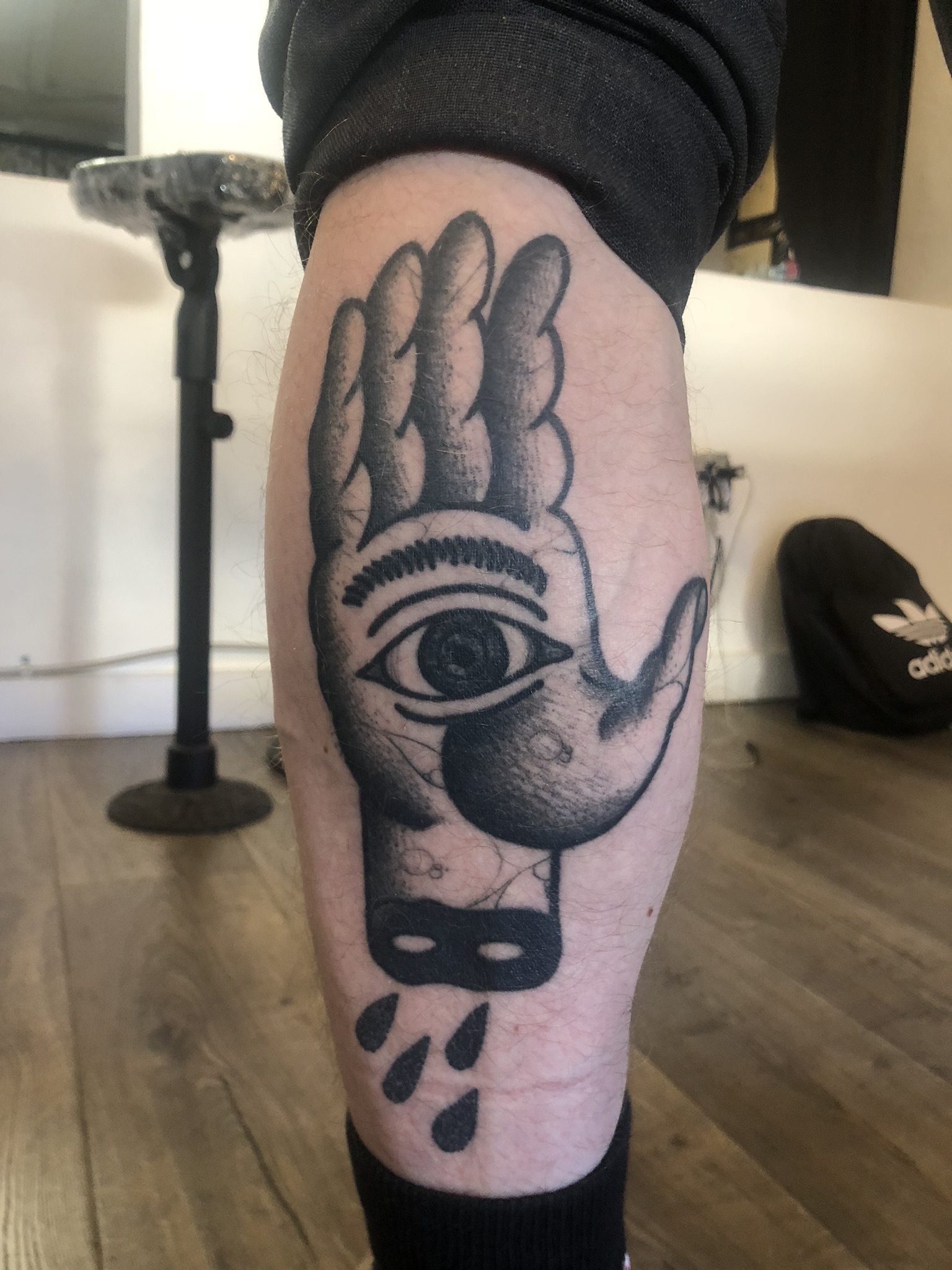 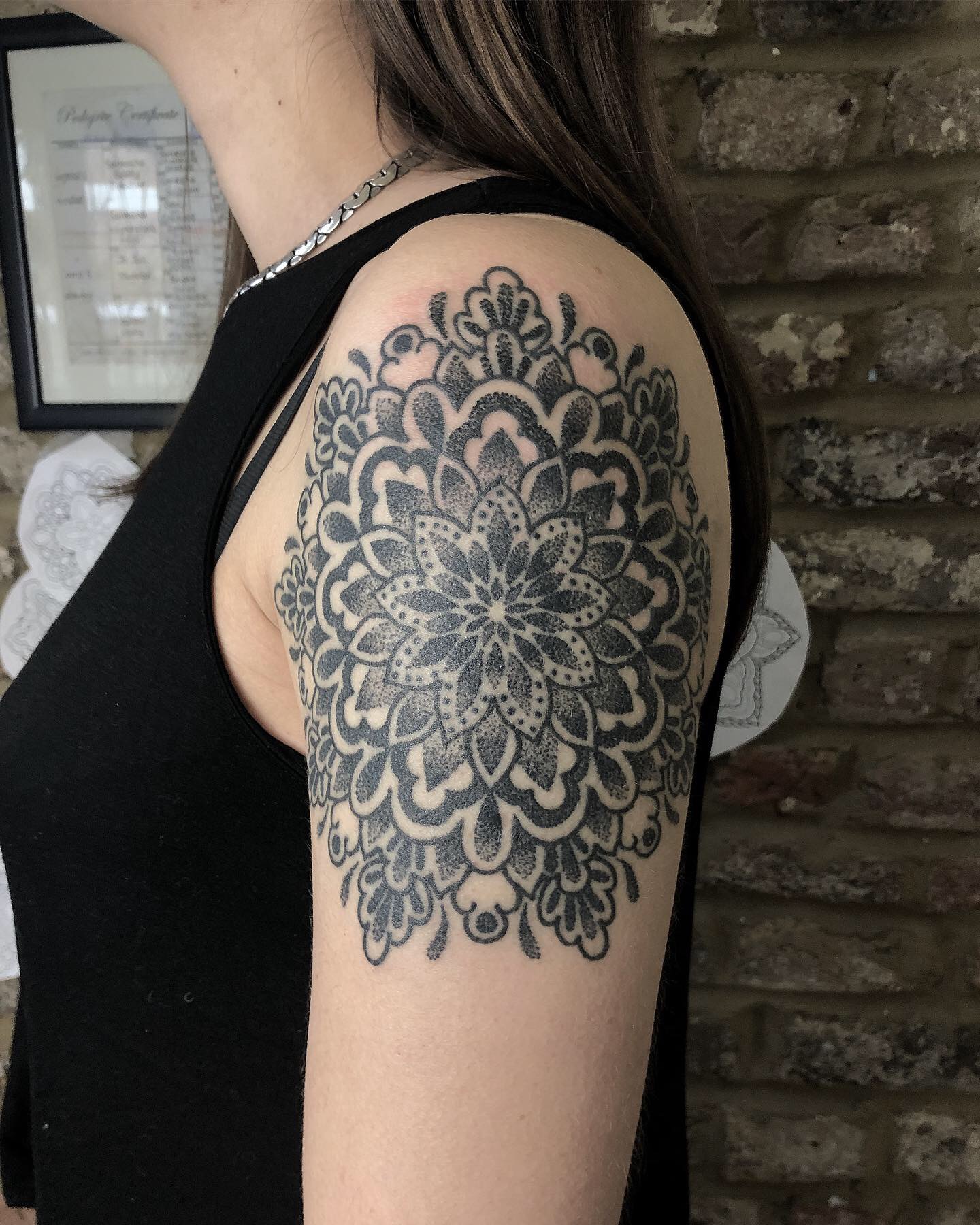 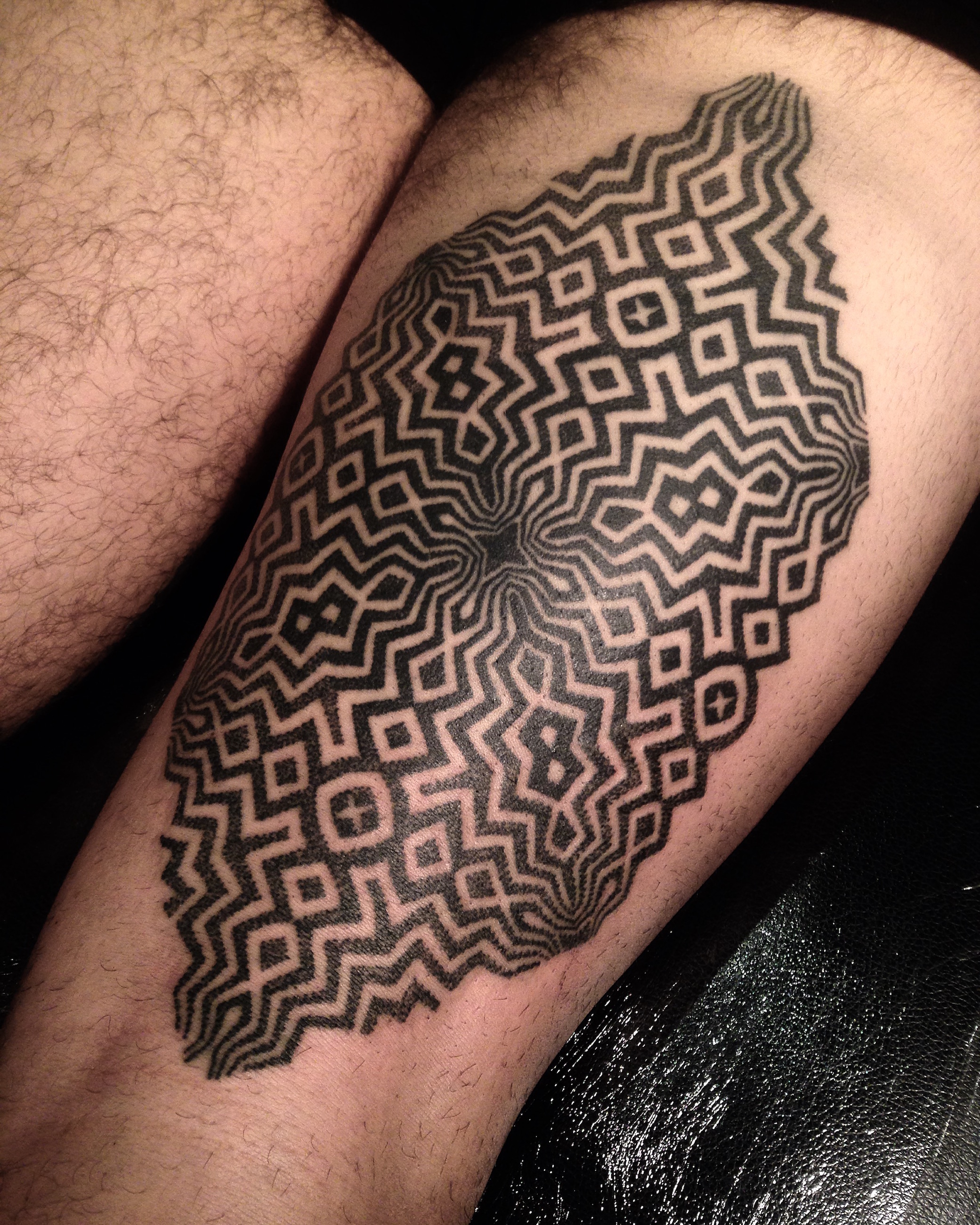 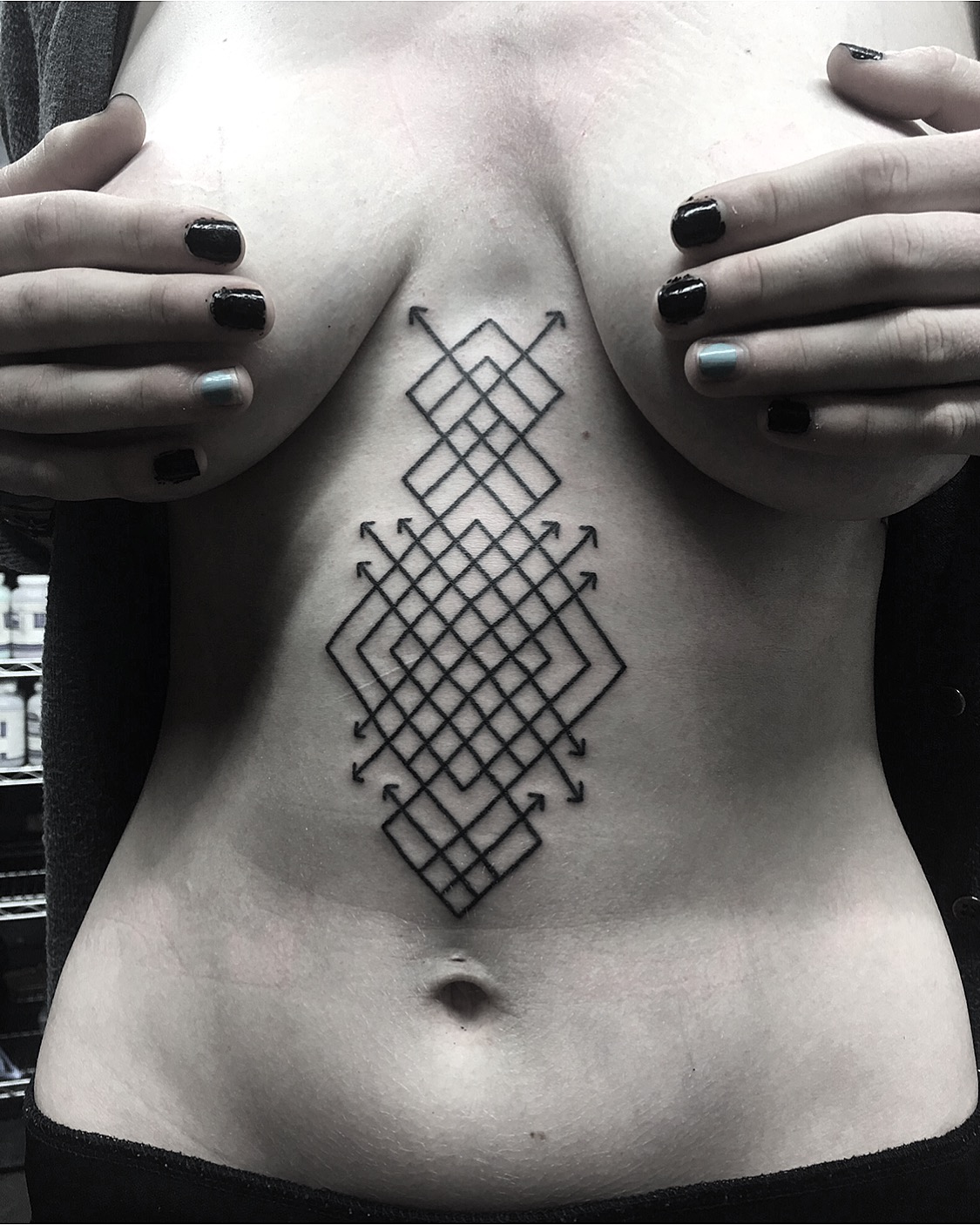 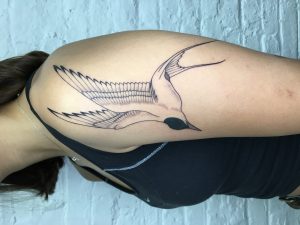 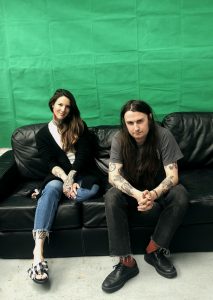