Karl Knight is Buyer at Autograph Menswear in central Birmingham. Inspired by an early introduction to biker aesthetics, additions to Knight’s collection are often chosen spontaneously, lending the pieces a lively and haphazard cohesion.

What is your name, birthplace, and year of birth?
Karl Knight. I was born in the United Kingdom on January 19th, 1985.

Where did you grow up? Please describe your upbringing and sociocultural background.
I was raised up in Dudley, a town in the Black Country. It's a quiet place with plenty of history and character which has probably added to my personality over the years.

What made you want to get tattooed? What are your first memories of seeing tattoos?
My old man has a big involvement with the Hell's Angels, so I was brought up in an environment where I saw that type of tattooing a lot—as hard as my mother tried to keep it away! Seeing all these bikers covered in tattoos instantly got me hooked on the idea. I was fascinated with the tattoos and their origins.

Who first tattooed you and how did you choose the design and placement of that tattoo?
I was only 14, so I don't want to say by who and get them into a bit of trouble! I was a big hip hop fan growing up, from the age of about eight or nine. I knew the tattoo needed to be related to that in some way. Wu-Tang was my group! They were pretty much all I was listening to when I was 14, so I decided that it had to be the “Wu” logo on my chest…probably wasn’t the best place to choose for my first piece. In hindsight, I could have gone with a less painful area!

After your first piece, did you deliberately build a collection? How do you conceive of the relationship between your tattoos?
I know that I’m always going to have a fixation with and solid interest in tattooing and the artwork of others. There's always something new and innovative coming from some place and it shows that there are no real limits with art and tattoos. My collection is not rapidly growing, but I like to consistently keep ideas in my head and leave options open when it comes to tattooing.

How do you understand being substantially tattooed? How does it differ from living with your first few pieces?
I think the current social climate benefits people with heavy coverage much more in that it no longer sees this as an issue. I’ve never really felt that covering most parts of my body would differ significantly on a daily basis from either having only a few pieces or having none at all. I’ve never felt like my tattoos deserve somebody else’s approval, nor does how I portray myself to the public in general. In that sense, growing up around Hell’s Angels has probably always had an underlying influence on me: I’ve always been around heavily tattooed guys, so it’s never really been anything new to me.

How do you choose your artists and motifs?
I didn't really ever have a plan going forward with the collection. I've always sort of taken it as it comes: I'll have long periods of time when I don't even think about getting another tattoo; then I'll switch and decide what piece I want and where I want to put it within the space of a few hours. Like most people, I'll start with researching similar designs and then I'll relate that back to the work of different artists that I’ve seen over the years.

"The big connection has always been the artistic side of fashion and tattooing. I think they both go perfectly together, allowing somebody to express themselves in the way they want to. Whether it’s a collection of loud, ‘out there’ outfits and full body suit or some kind of minimal, clean cut tailoring and small tattoos—it’s all really personal to you and how you want to put yourself out there."

Has your collection received any interesting reactions that you’d like to share?
Most of my work is covered up on a daily basis. I’m unfortunate to live in a country where we don’t get much sun, which limits when I can really show my pieces! Apart from noticing people that stare at my hands and neck, I wouldn’t say there have been any ‘interesting’ reactions—just positive comments on the work. I think we now live in a time where tattoos are more accepted and appreciated instead of being instantly judged.

What do you do for a living?
I'm a Menswear Buyer for an independent boutique in Birmingham called Autograph Menswear. We've been based in the city center for over 30 years and have developed a special understanding of our clients and the product we sell. We're always on the lookout for new and innovative things, which makes my job so enjoyable! Right now, we're planning something big and exciting for the future, but unfortunately I have to be sworn to secrecy for the time being!

It sounds like much of your time is concentrated on the curation of clothing. Does your approach in selecting brands intersect in meaningful ways with your approach to choosing tattoo artists and designs? What, for you, is the relationship between tattooing and fashion?
The big connection has always been the artistic side of fashion and tattooing. I think they both go perfectly together, allowing somebody to express themselves in the way they want to. Whether it’s a collection of loud, ‘out there’ outfits and full body suit or some kind of minimal, clean cut tailoring and small tattoos—it’s all really personal to you and how you want to put yourself out there. I’m lucky enough to have some of the best artists in the world today put their hard work and talent on my body and I’m proud to be able to display that work whenever I can.

You can find out more about Karl Knight on his Instagram (@k_dylan).


Tattooists:
Half-sleeve of religious motifs by Andy Morris (@andy_morris_native_ink).
Mandala flower, linework on both hands, and band on right calf by Xed Le Head.
Crane on lower left leg, wasps on knees, and dragon on back by Maxime Plescia-Büchi (@mxmttt).
Battle of ships scene on torso by Matt Difa (@mattdifa).
Swallows on neck by Cesar de Cesaro (@tattoo_a_dor). 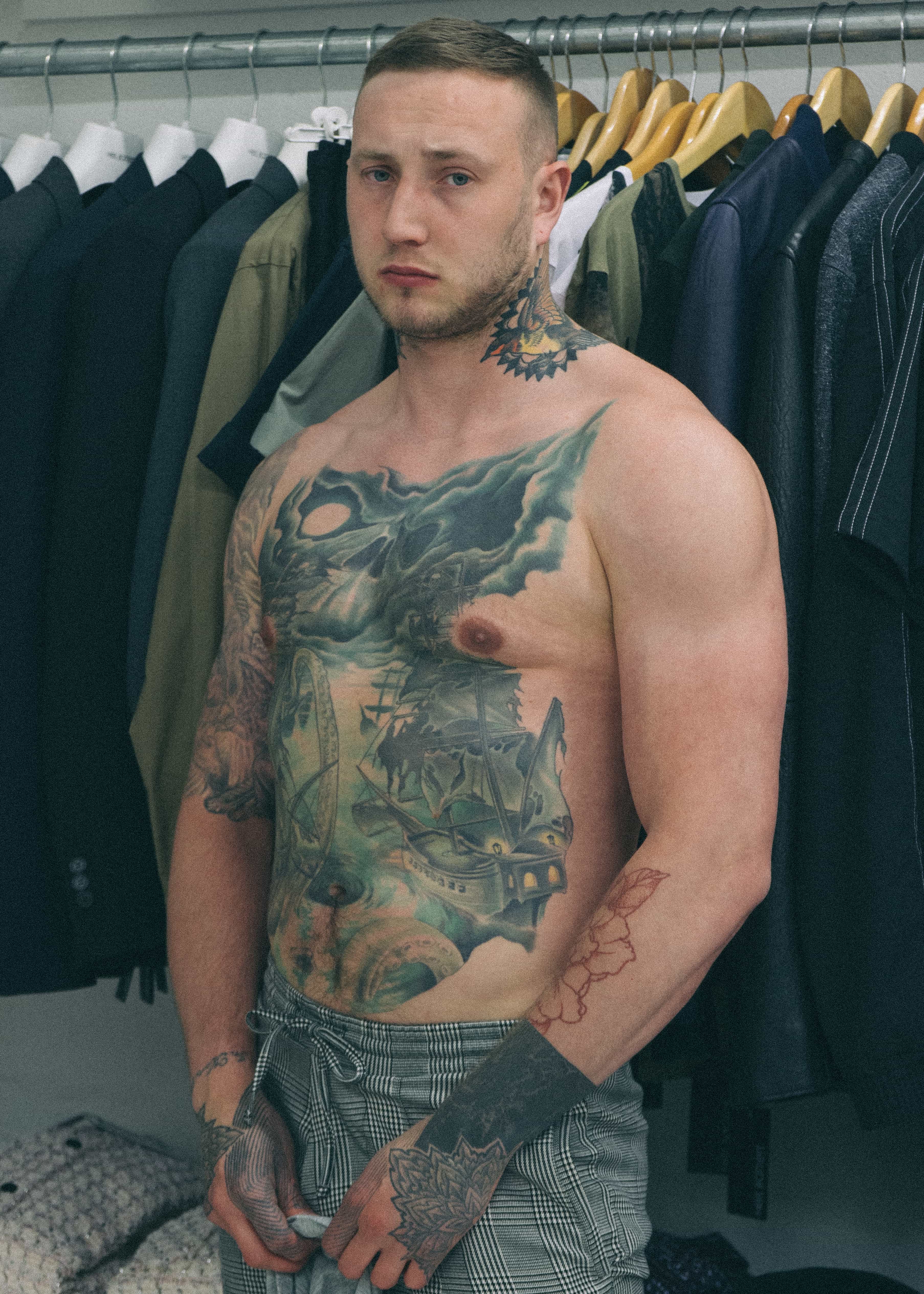 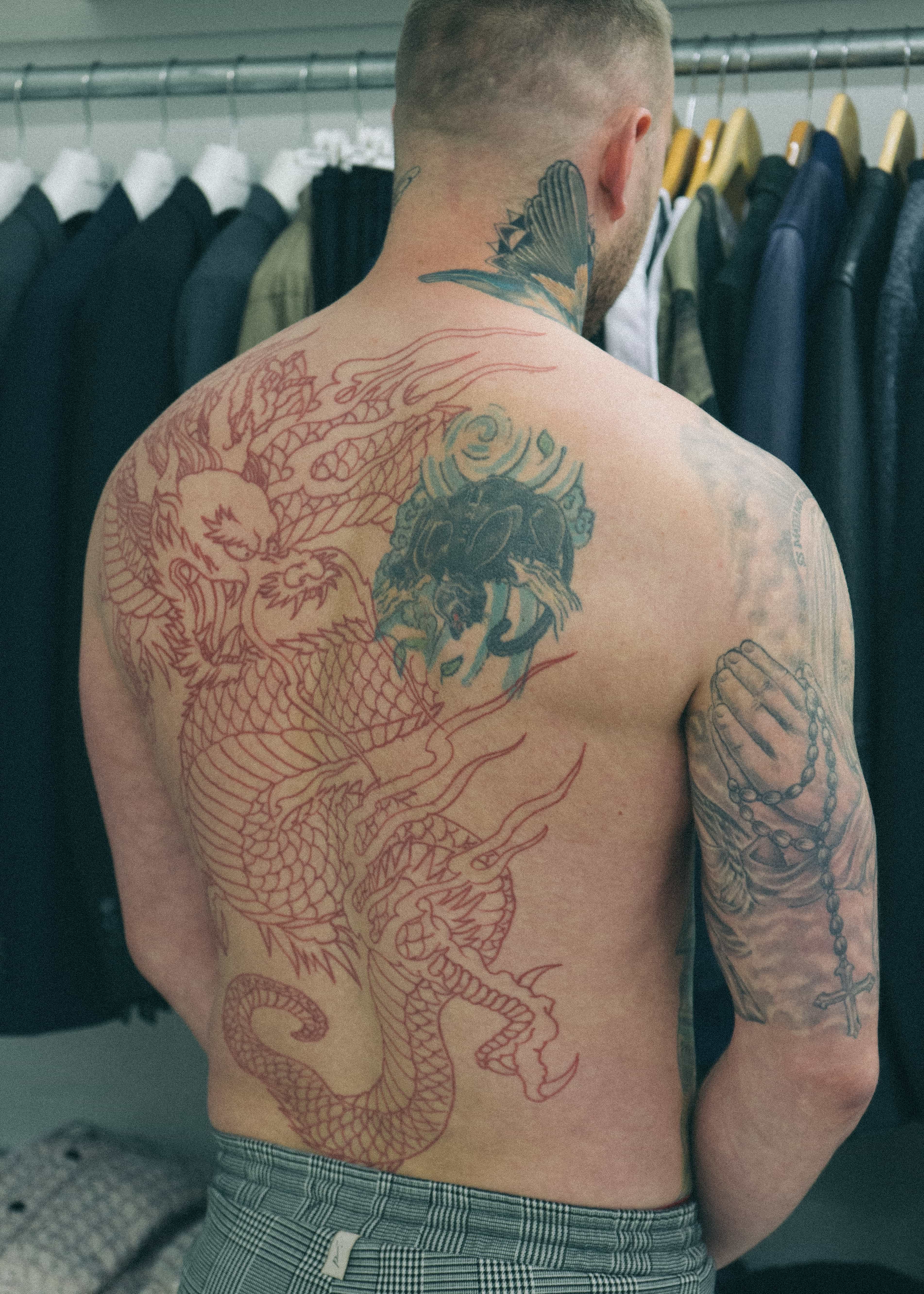 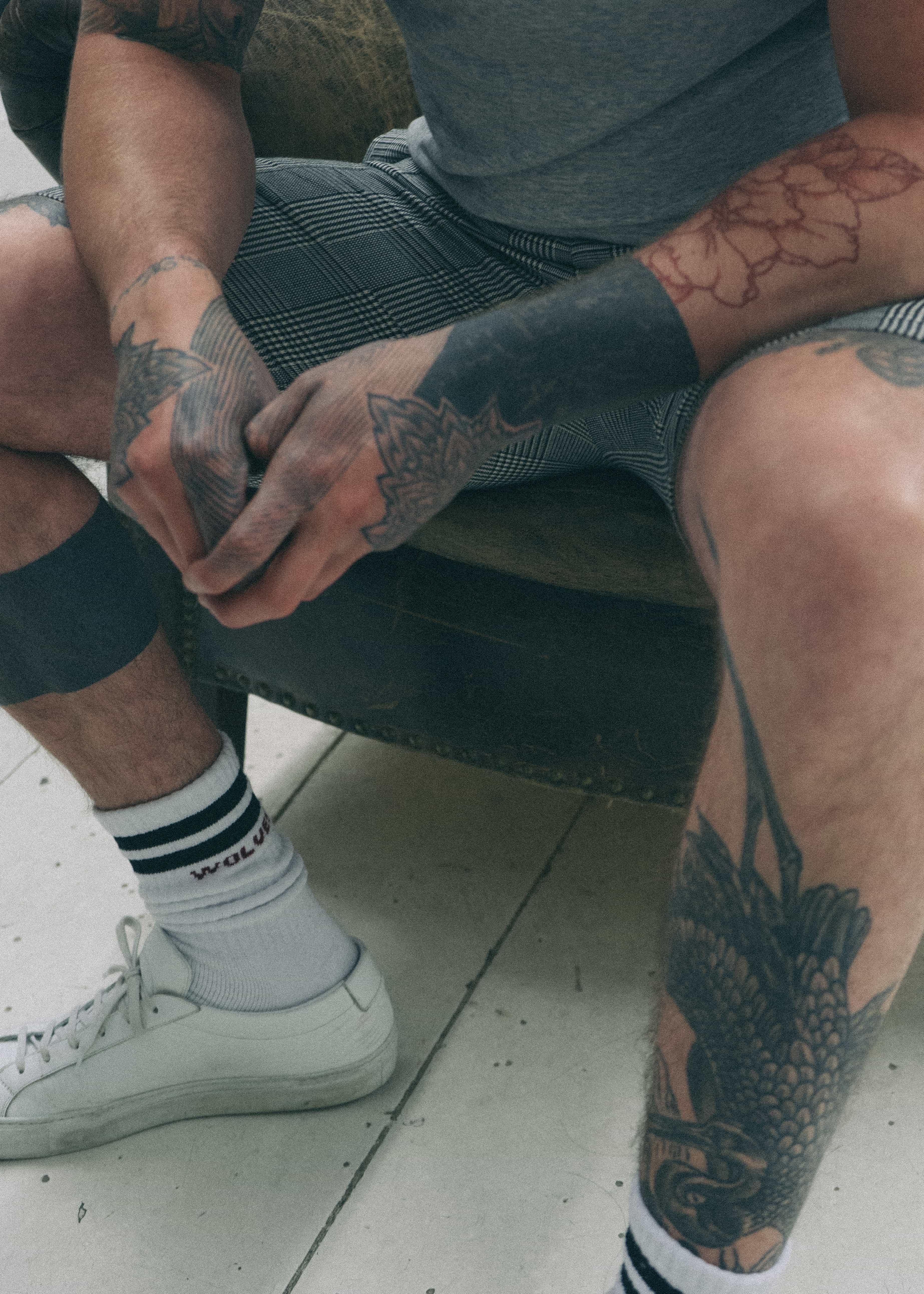 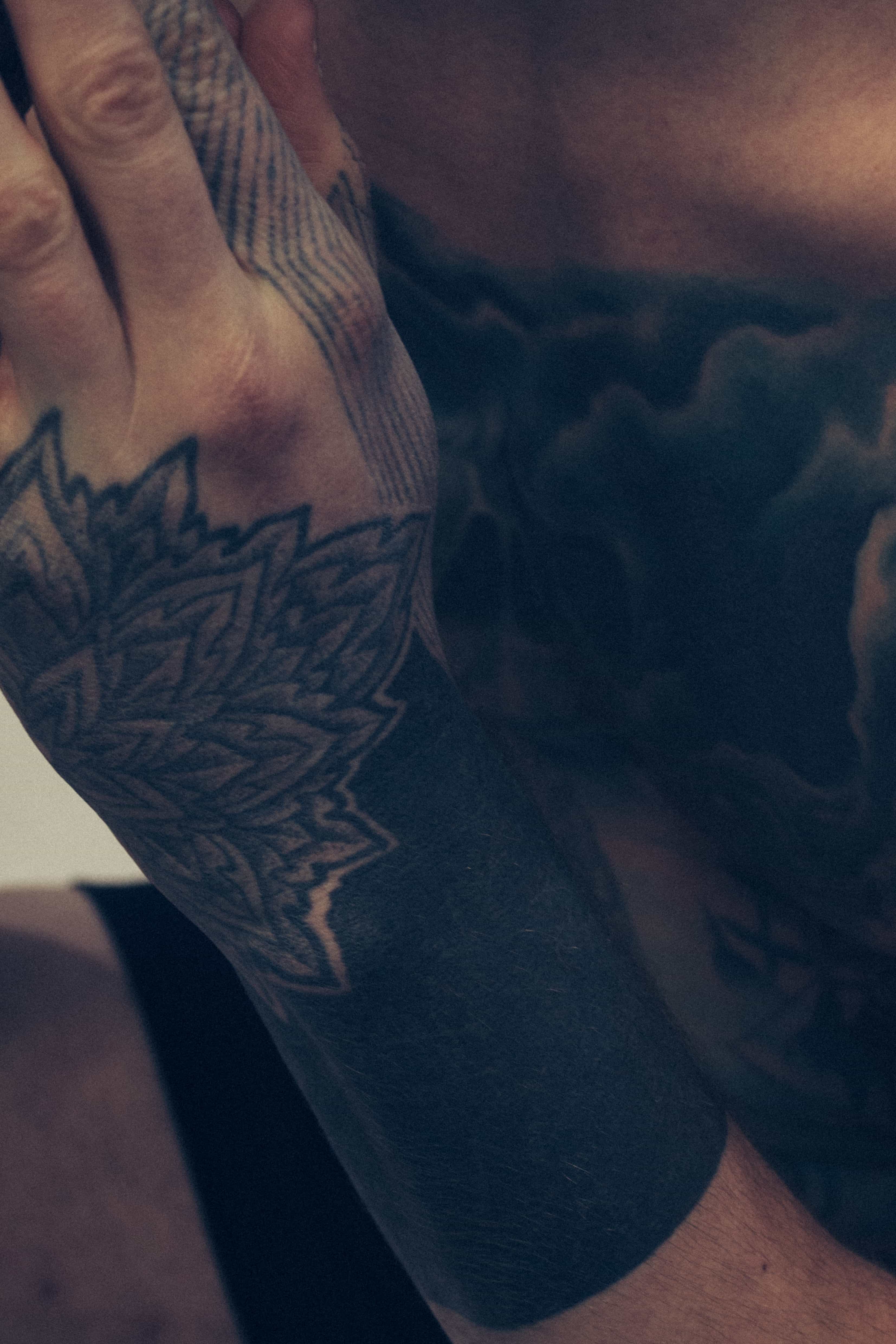 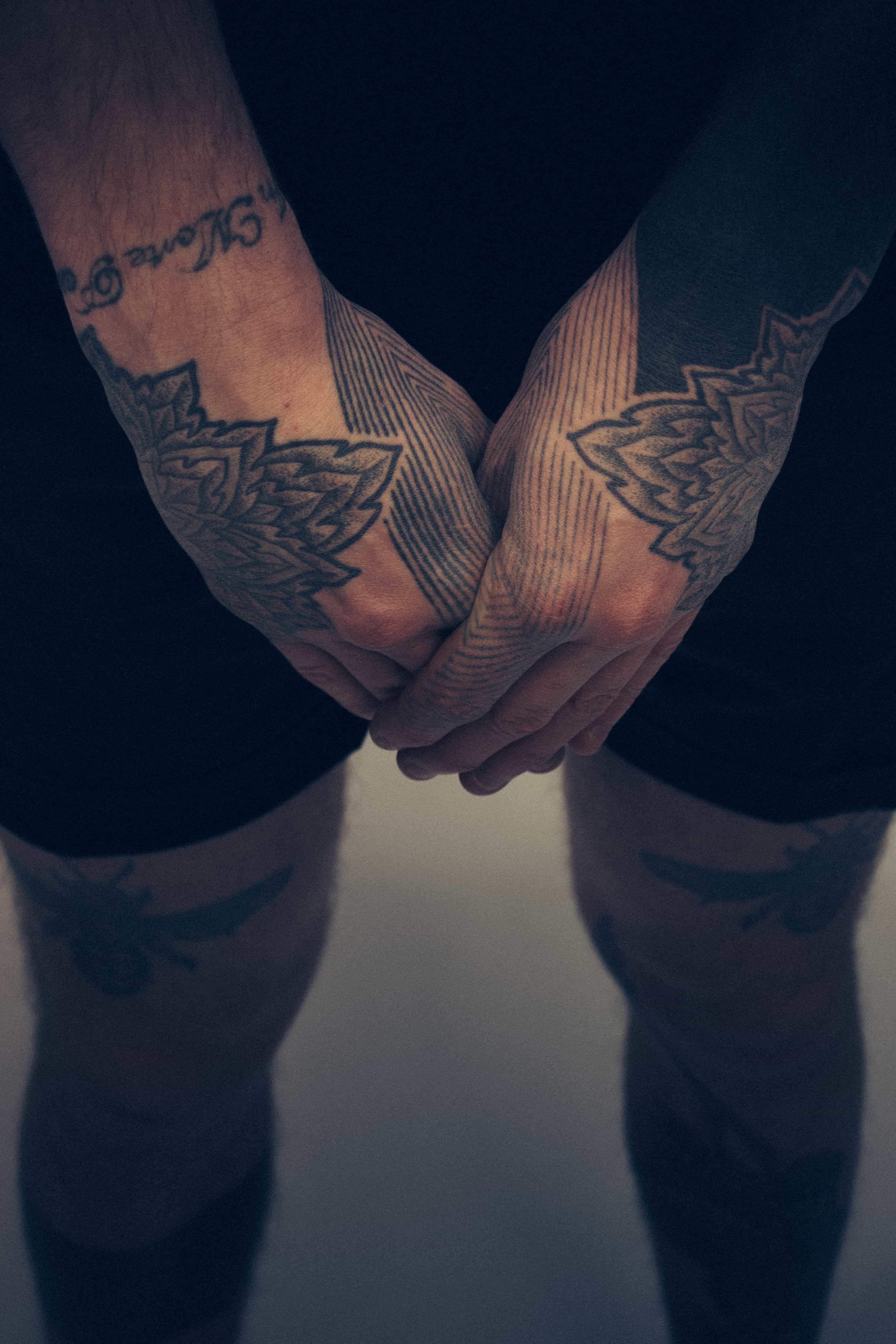 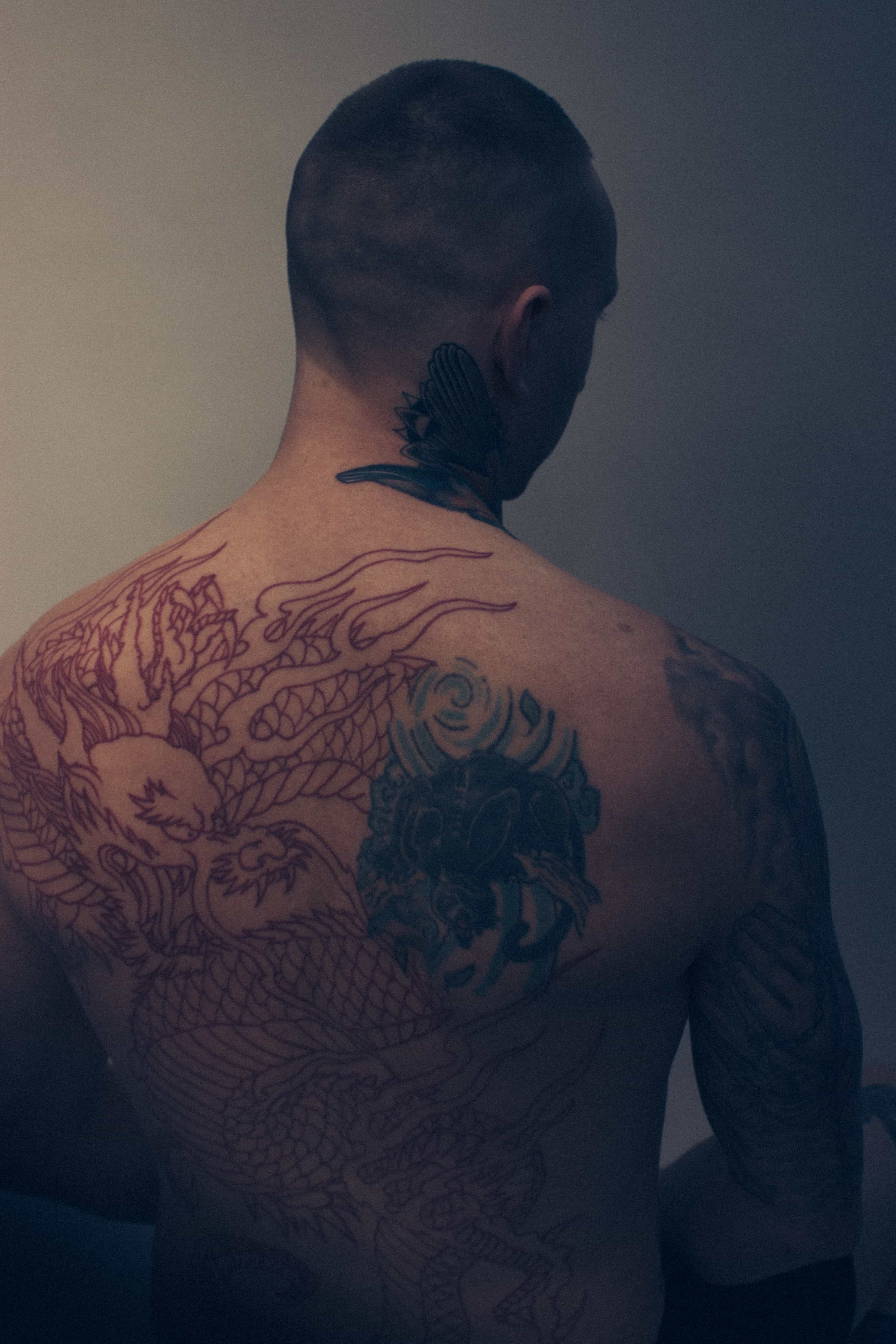 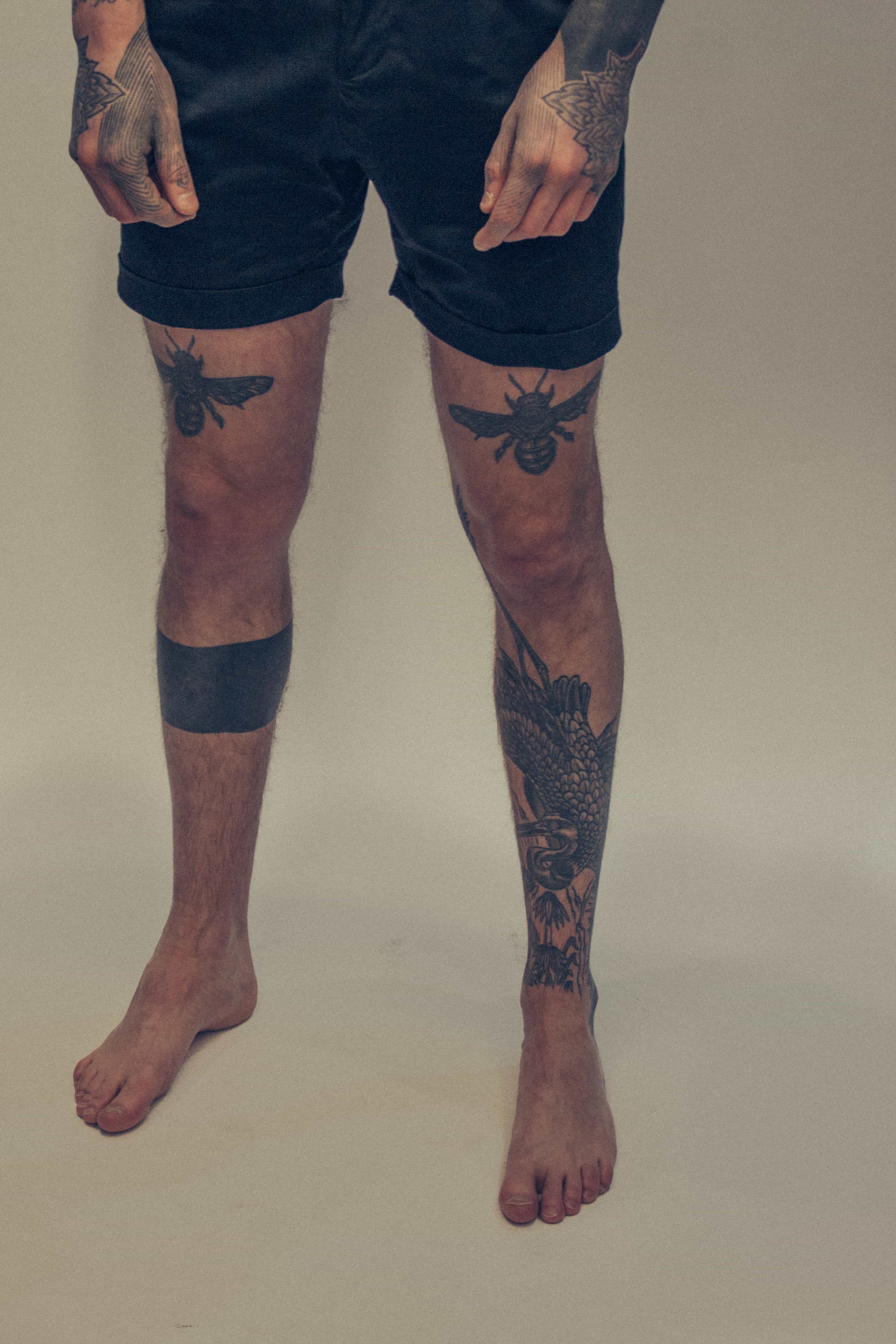 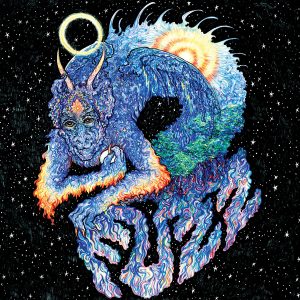 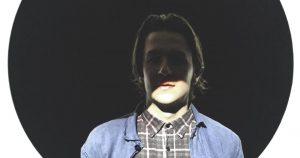