Top of head by Sal (@sal_s_tattoo)

Side of head by Sal (@sal_s_tattoo) | Rose by Lauren Melina (@laurenmelina)

Hayden Gan De Mari (@haydengan) is a tattoo collector and men’s fashion buyer at Mi-Life (@milifeshop). He lives and works in Fremantle, Australia. Hayden was born to a middle-class family in Atlantic City, New Jersey, in 1987. “My father was a laborer. My mother stayed home to take care of my sister and I. My home was an environment that was open-minded and accepting of all lifestyles and races. It was filled with good music, colorful art, tarot cards, and crystal rocks—all of which I owe to my mom, a modern-day gypsy.” Hayden, who was first tattooed at the age of 18, now has an impressive amount of his body covered in tasteful, monochromatic pieces.

What made you want to get tattooed? What are your first memories of seeing tattoos?
I grew up idolizing my grandfather—a retired Navy Merchant who lived his golden years on the back of his Harley. The first tattoos I ever saw were his. His arms were sprinkled with Sailor Jerry flash of a hula girl from a tour in Hawaii, a snake on his upper forearm even though he hated them, and a tiger face planted nicely on his shoulder. I remember riding on the back of his Harley, seeing the sun hitting his tattoos with wind in our faces. I knew then that’s exactly the life I wanted to have.

Who first tattooed you and how did you choose the design and placement of that tattoo?
I was tattooed at a local shop in Hampton, Virginia called Blue Horseshoe Tattoo. It was very well known as it was run by Christopher J. Bowman, who helped legalize tattooing in Virginia. Sadly, I do not remember the gentleman who gave me my first tattoo. I remember looking through his flash book and him using a circle grid to determine the price—a very different process ten years ago than it is now. I knew I wanted something to represent my 18th birthday, and of course went the very safe route. I almost get embarrassed to admit my first tattoo, but it is what it is. It’s a Gemini symbol on top of a star. I placed it on my inner forearm—a nice compromise for my parents as they didn’t want me to have anything too visible just yet.

After your first piece, did you deliberately build a collection? How do you conceive of the relationship between your tattoos?
After my first piece the addiction was formed and I was obsessed with getting more. I was 18 years old, and had an image in my head of the person I wanted to be. Obviously, at the time, the images I wanted to cover my body were still blurred as I was still figuring out styles, and the best artist for those pieces. I always knew I wanted a body suit since I was very young. I stared at photos of USA Navy men covered in tattoos, wishing I was old enough to look the same. That first day was the beginning of many pieces to come. My tattoos are now like a story book for me. They tell the timeline of the past 12 years of my life, the most important years of my life so far. Together they tell the world who I am—what makes me, me without a single word being spoken.

Are there particular pieces that have had a lasting symbolic and/or historical significance to you? Is the meaning of a given piece or the time and context in which you got it important to you?
I have quite a few pieces for pinnacle points in my life. I swear I have every heartbreak documented on my body with a tattoo. I have the worst luck with women, and it’s clearly showcased on my skin, pieces that were shared with people to represent friendships that were once bulletproof and somehow turned to dust. My most important pieces relate to my mother and grandfather. I am so proud of the people they are, and the person they made me. Those pieces are the ones I look to when people ask me what tattoos mean the most.

How do you understand being substantially tattooed? How does it differ from living with your first few pieces?
Being heavily tattooed compared to having even half the number of tattoos has definitely impacted my self-esteem, as well as how I look at the world: I feel so much more at peace within my own skin. It’s amazing how a single tattoo can make me feel like a new person. My confidence is at the highest it’s ever been because I finally look in the mirror and am proud of the person I see, which is pretty crazy for the average person to hear. I just know that every time I go into the shop I leave looking and feeling better than before, closer to being the man in the pictures I used to idolize. You also start to notice the bare bits more, which ultimately drive you mental!

How do you choose your artists and motifs?
I have been so lucky to have the majority of my work done by people I call my friends. Ten years ago, when I first started getting tattooed, I had to rely heavily on word of mouth, and referrals from people I trusted. I still believe in that. The mirage of Instagram fame has taken away from the old-school approach of finding a genuine artist. I can list ten artists off the top of my head that are underrated and overlooked due to the number of Instagram followers they lack. I’d rather have someone I connect with permanently marking my body than a stranger that could possibly be the biggest dick head but has a 100k following. All of my pieces have found me—whether it’s late at night and I can’t sleep, or I stumble upon the idea with my friend trying to figure out what will fit the next gap. I never try to search for things, because I want all my tattoos to be influenced by fate and circumstance.

Has your collection received any interesting reactions that you’d like to share?
The interactions I have with people daily are always interesting, to say the least. I always feel like I am having the most random conversations with people I normally would never speak to—all because they wanted to compliment my tattoos, or ask who has done my work. The stares and random outburst from people saying, “my god what have you done?!” no longer bother me. To have this many tattoos in such visible areas—you should expect and understand human curiosity, even when they might not approach you in the best ways. Overall, though, I have met some of the best people, and continue to meet more people just because people love to talk about tattoos. I appreciate any connection I make with anyone, because even if they start off random I always leave knowing I showed someone that you can look this “crazy” and still be a nice guy.

You can see more of Hayden’s work on Instagram, @haydengan. 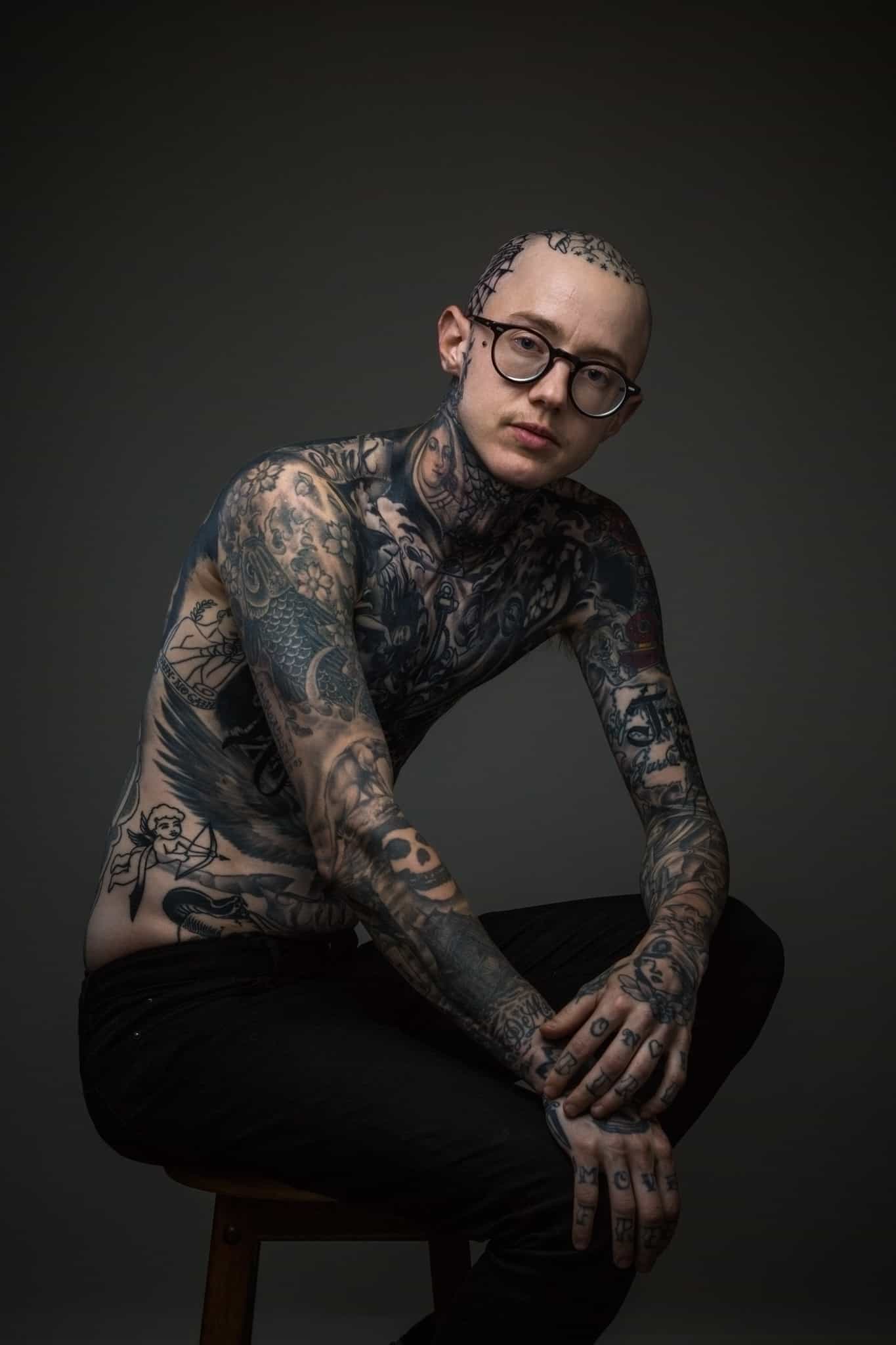 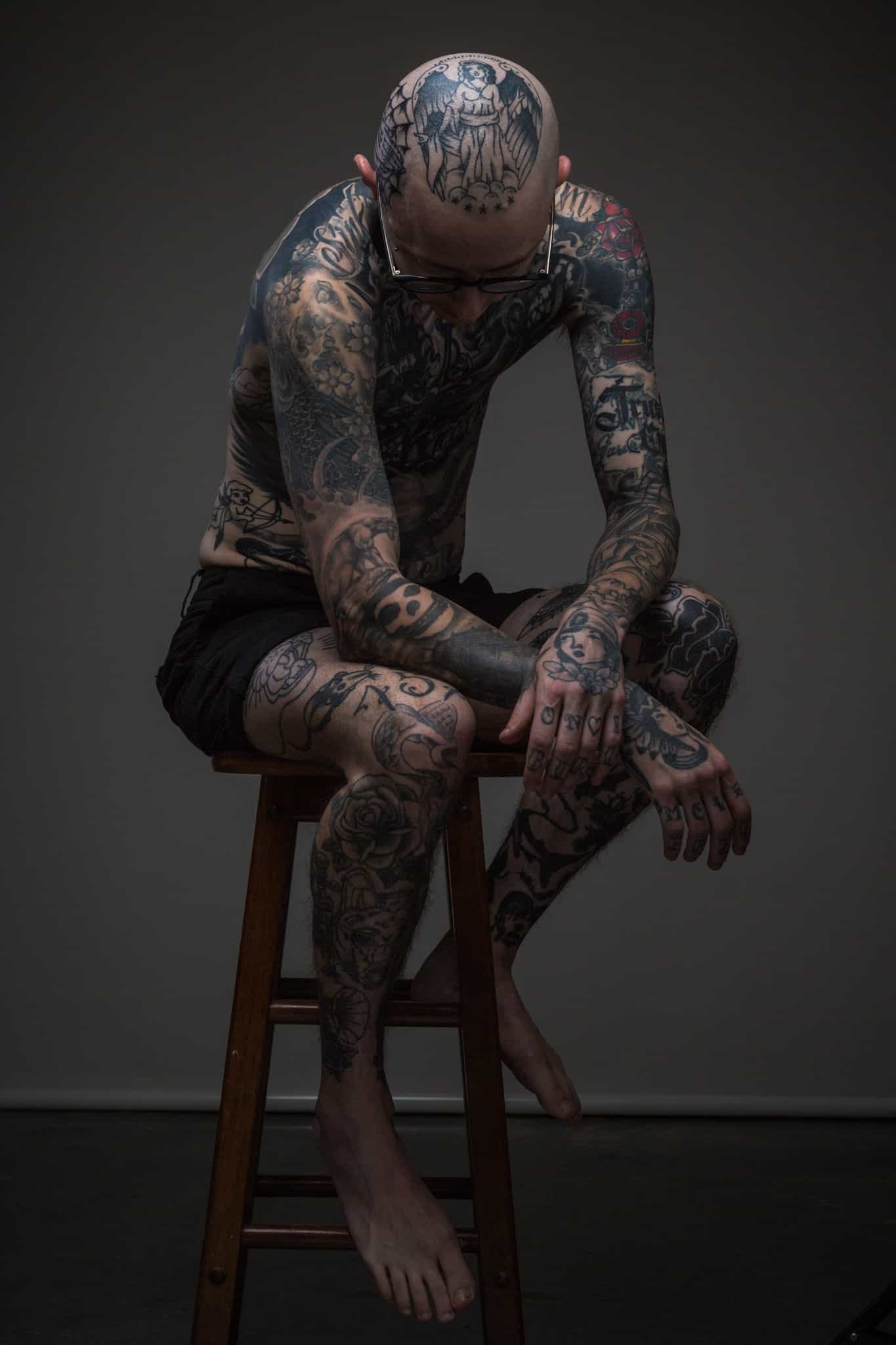 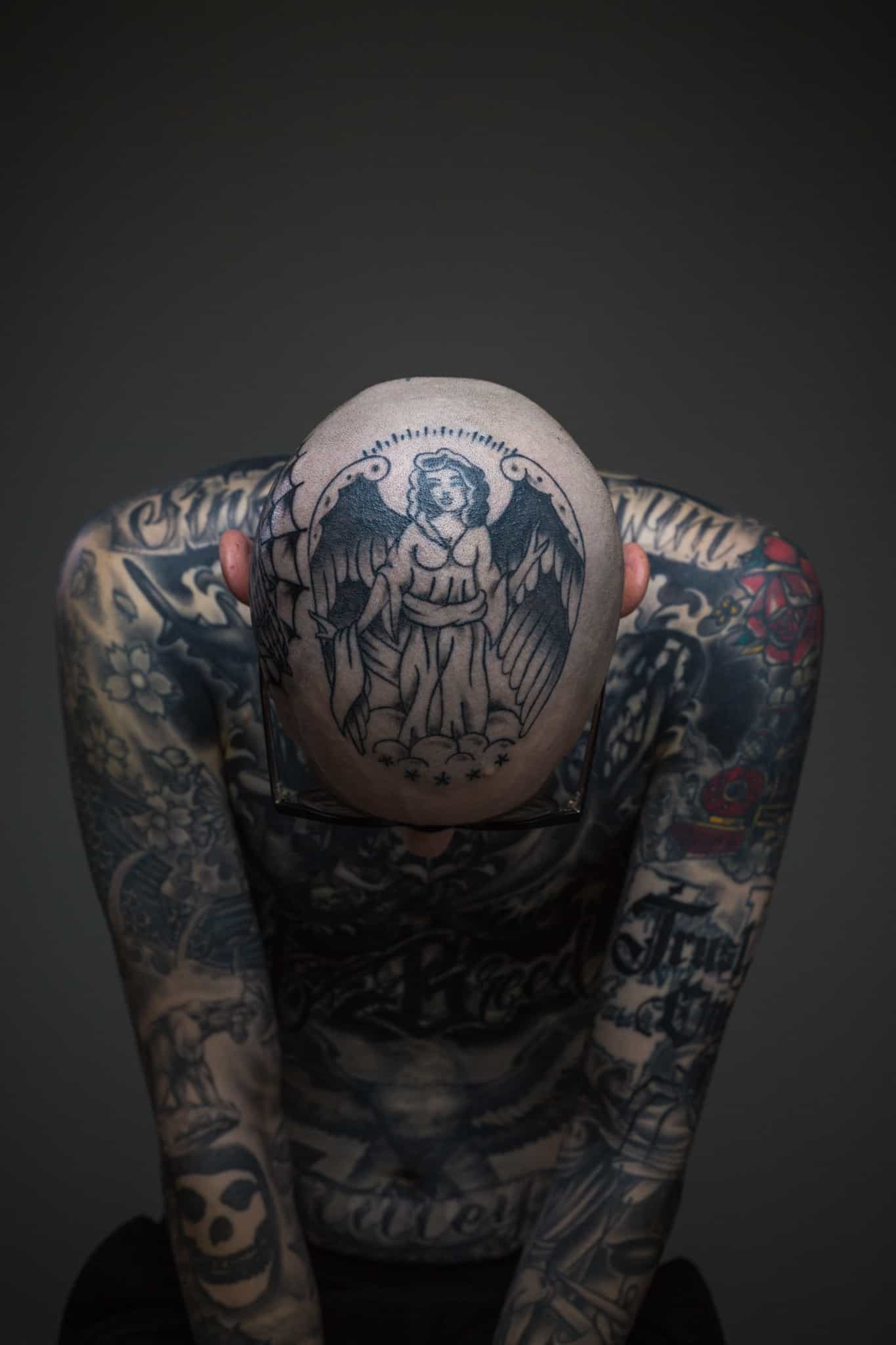 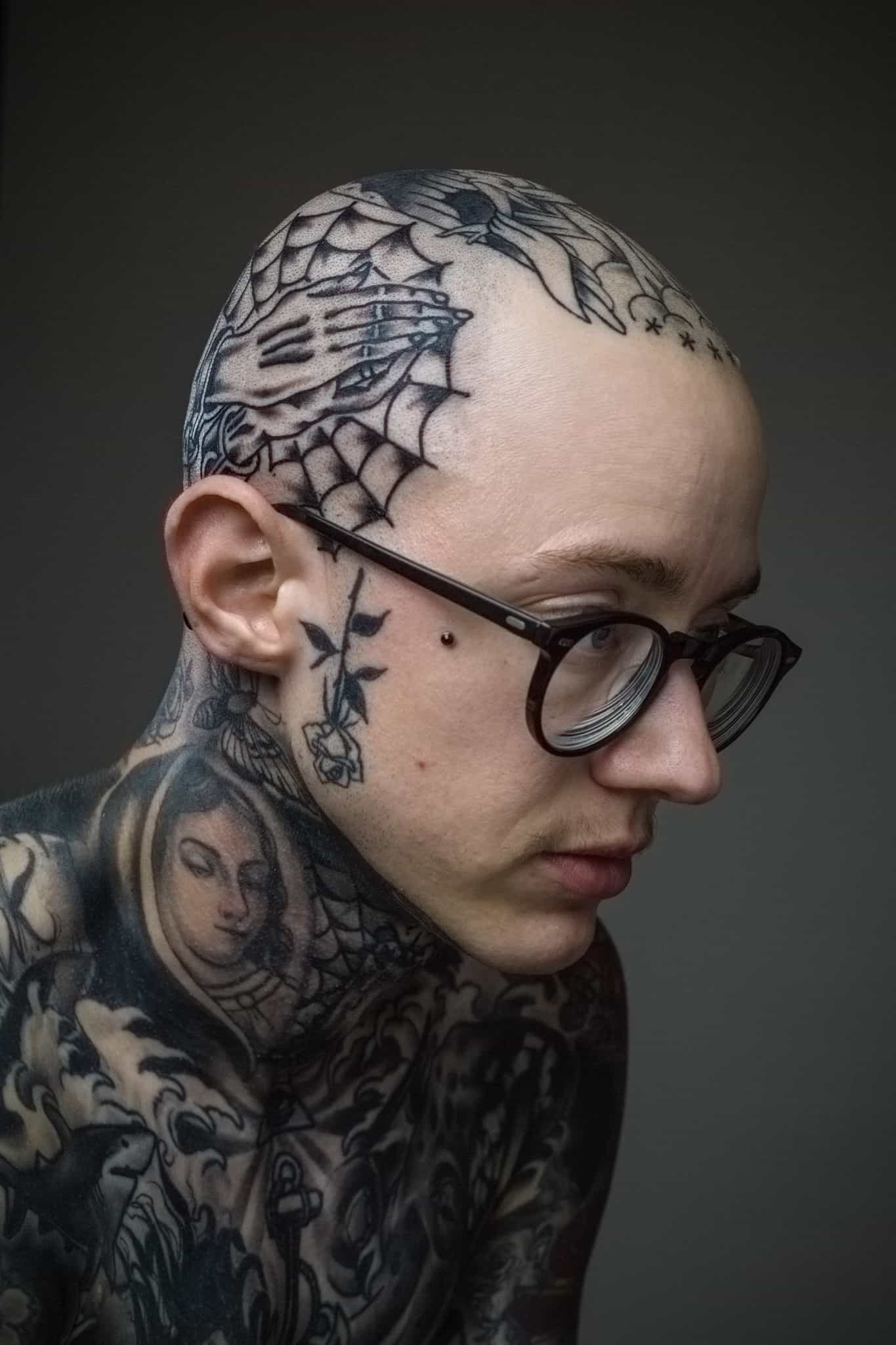 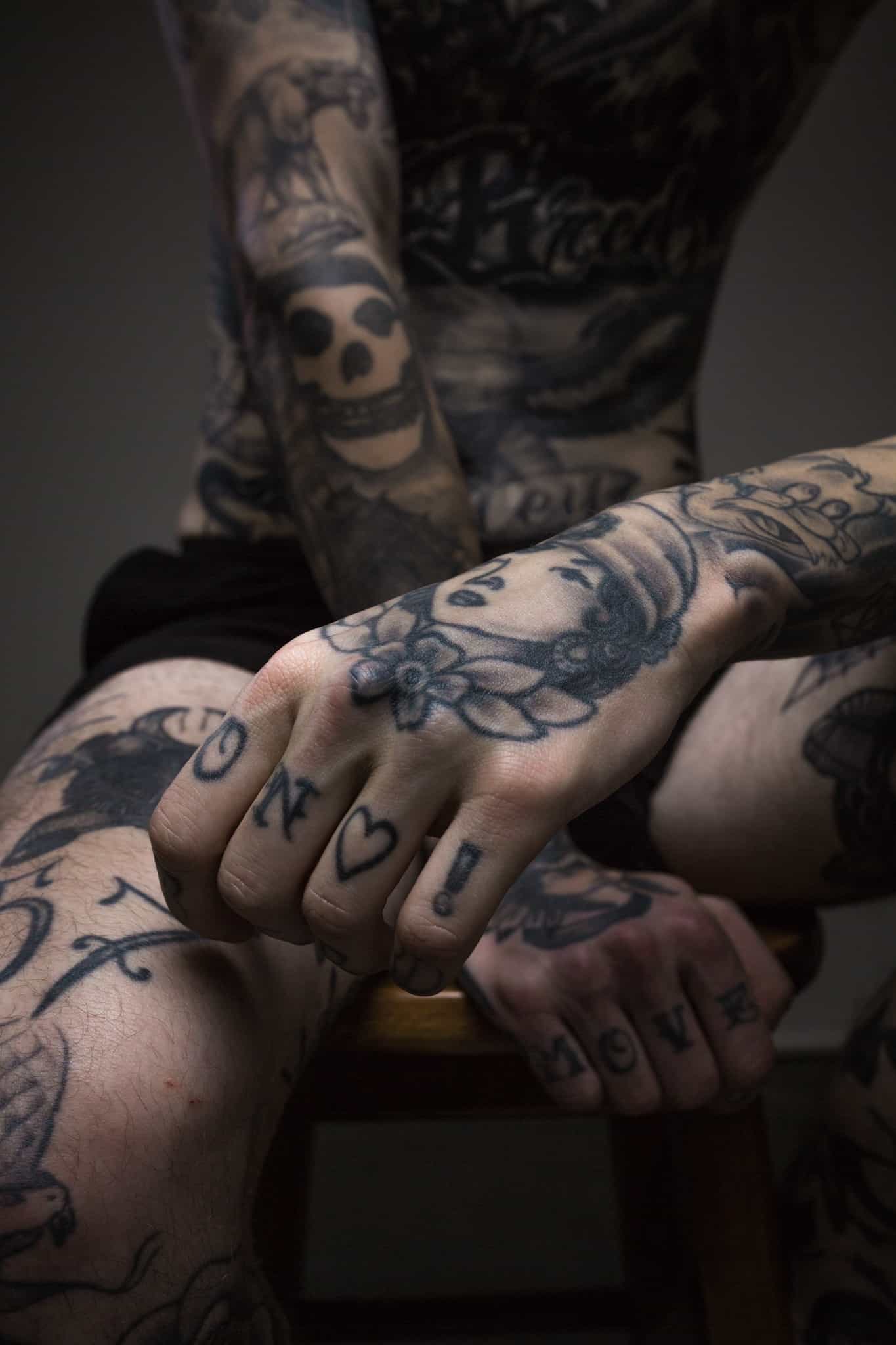 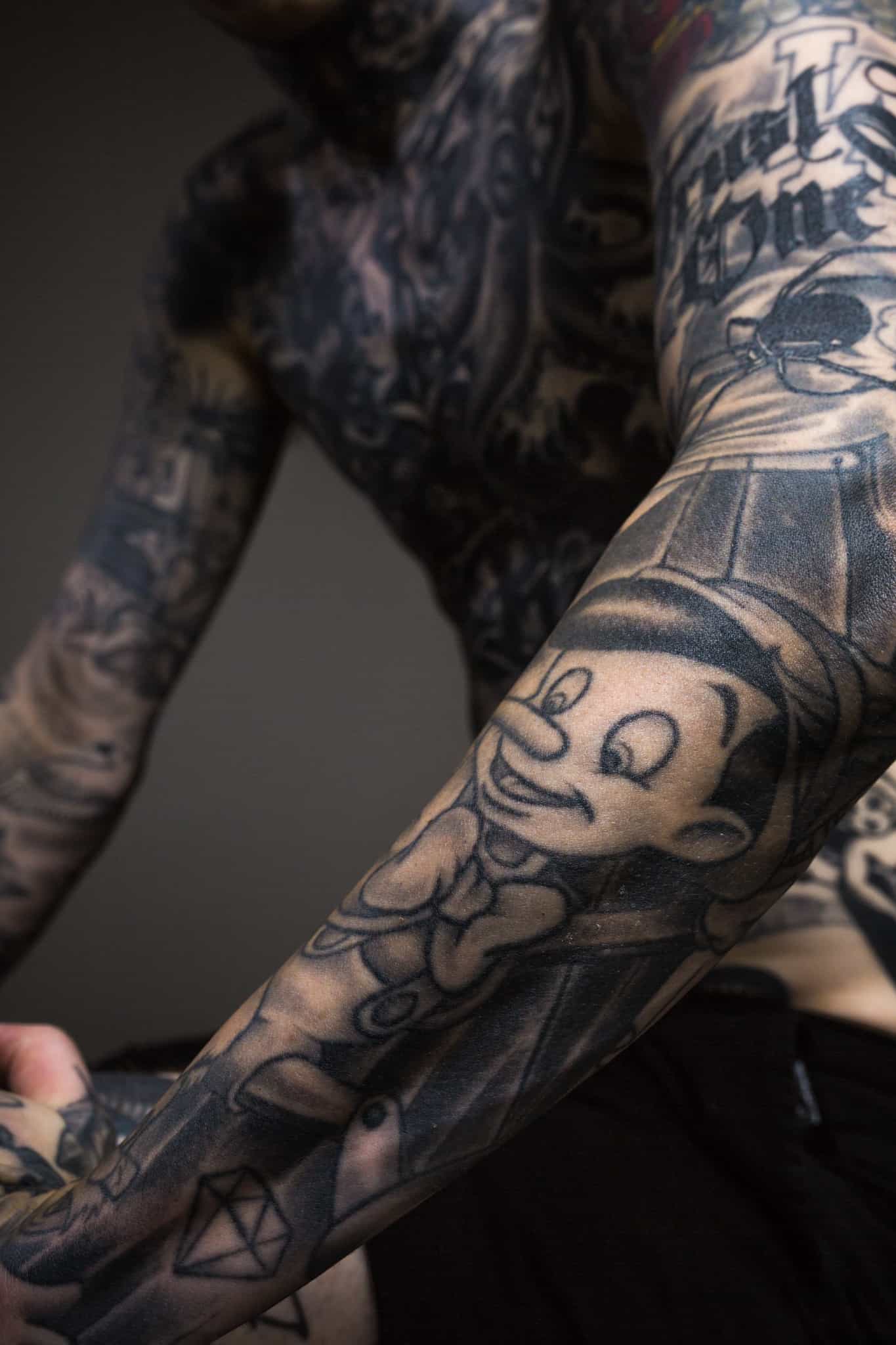 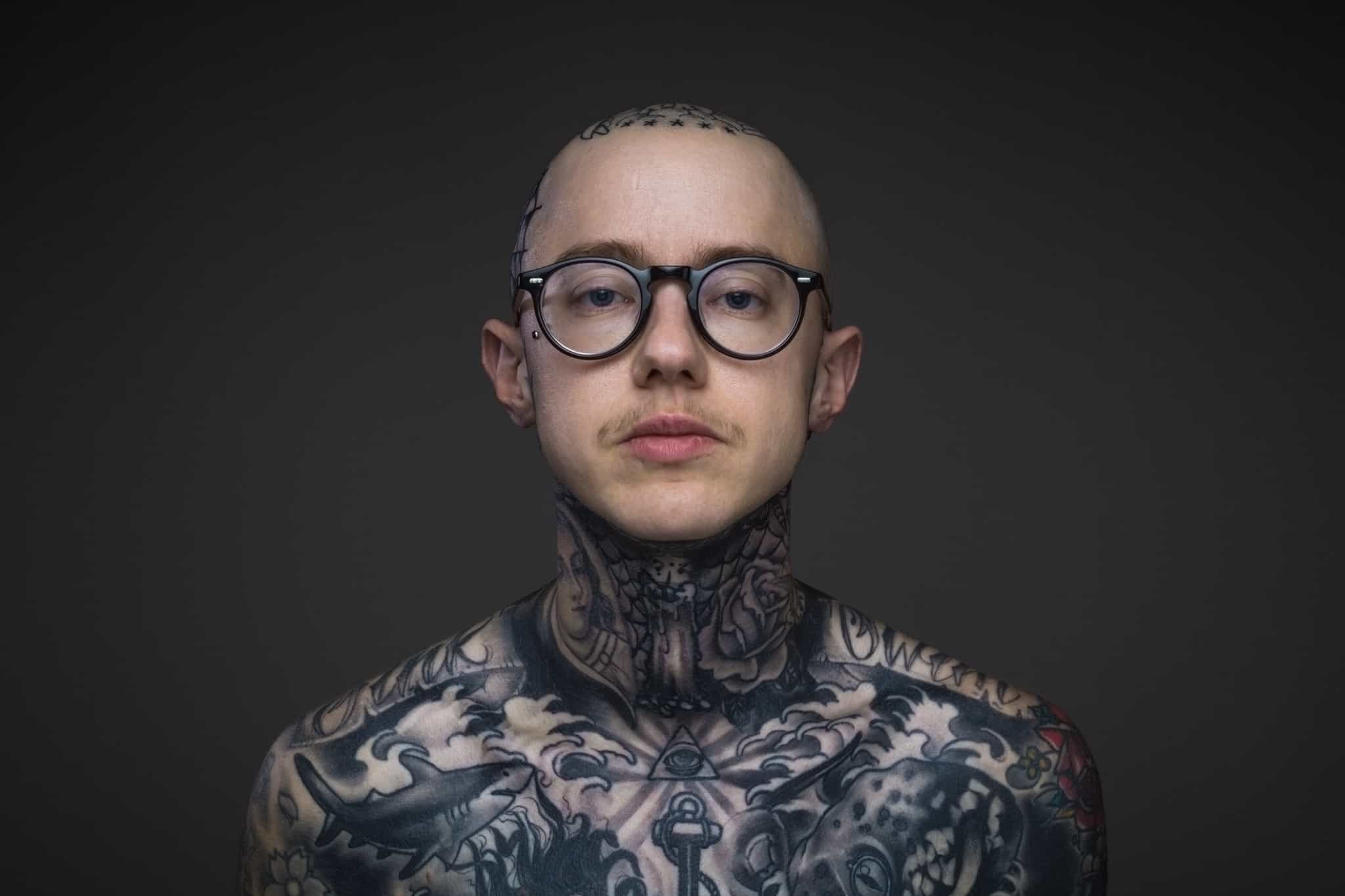 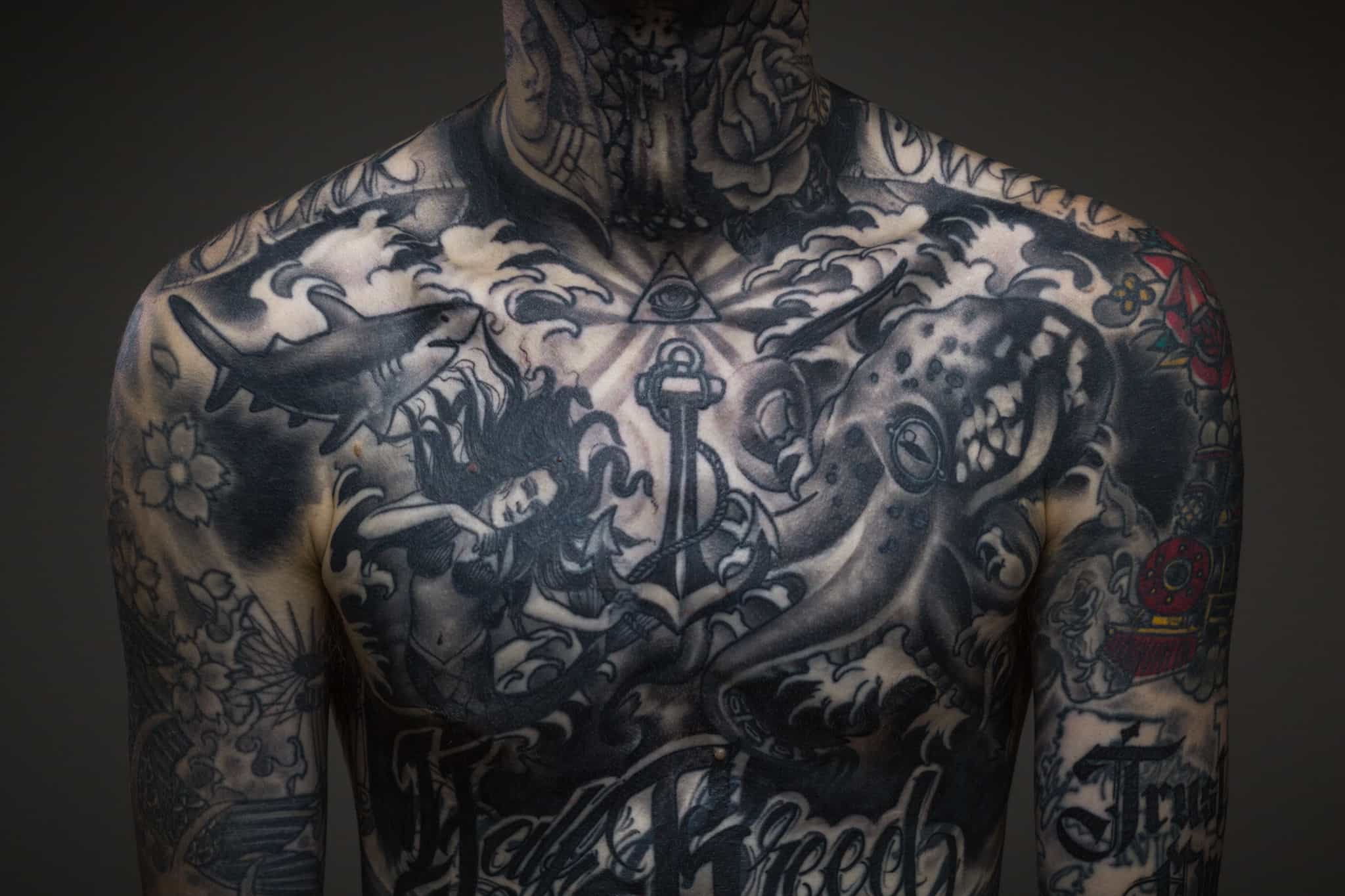 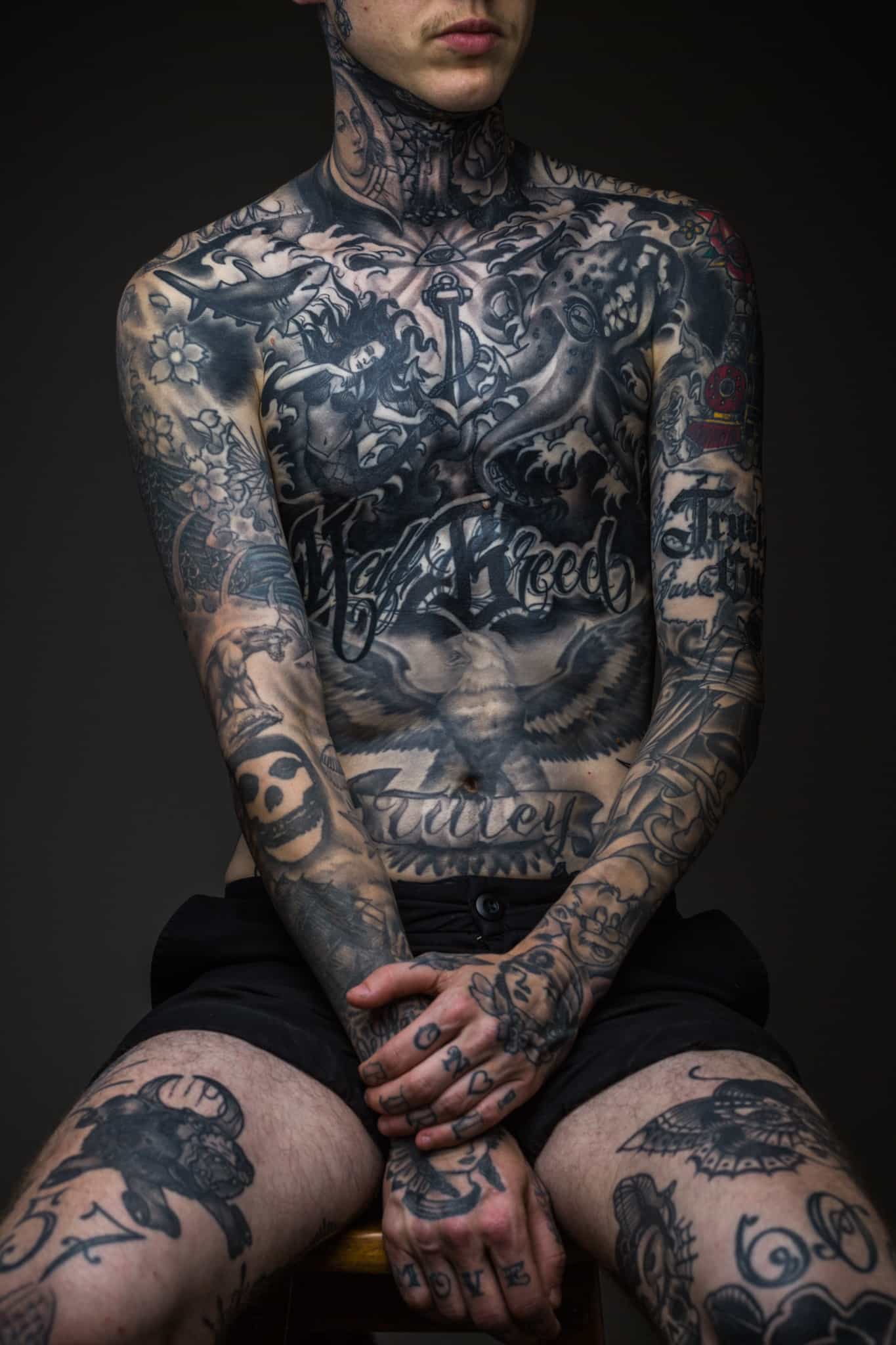 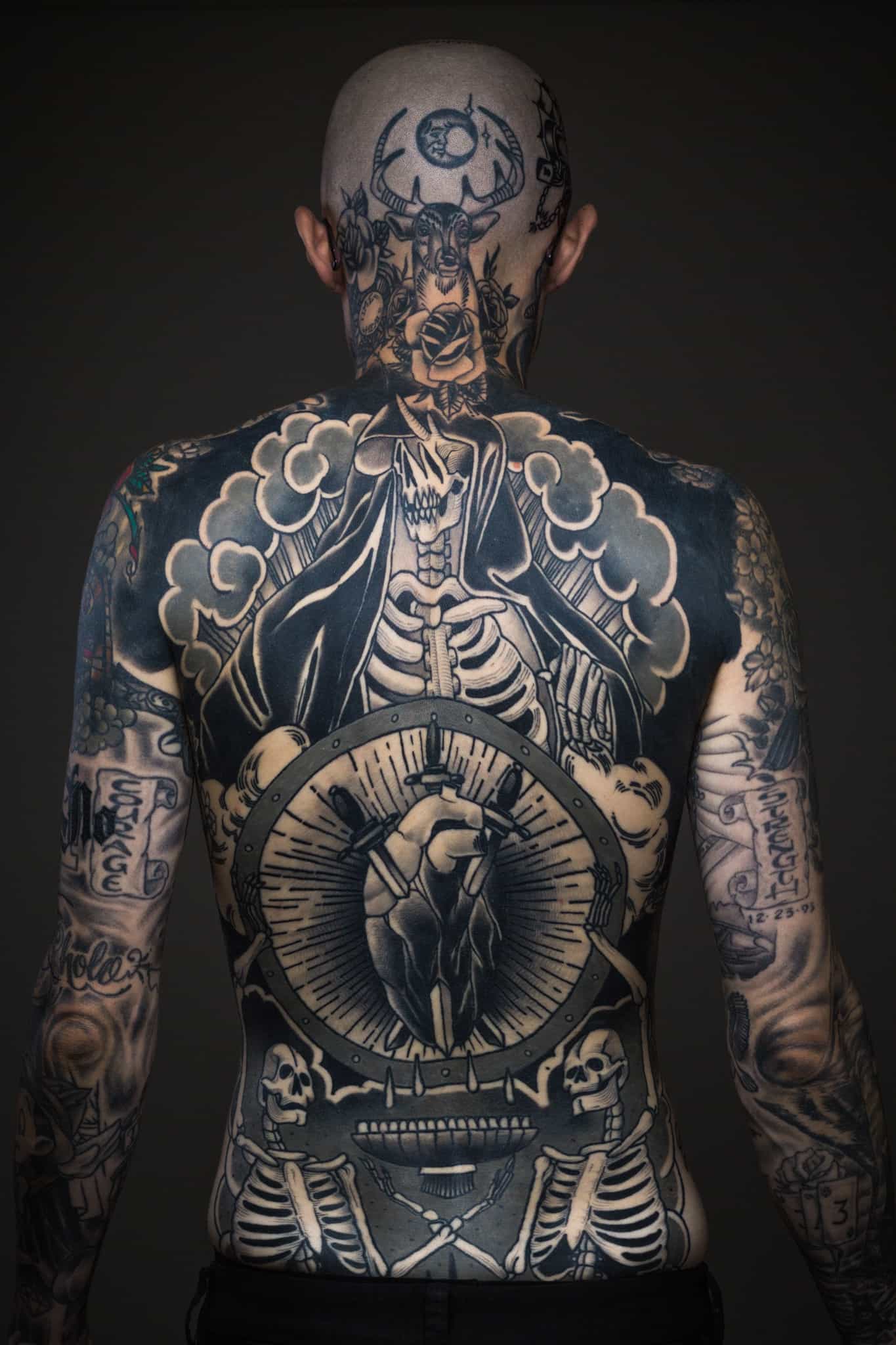 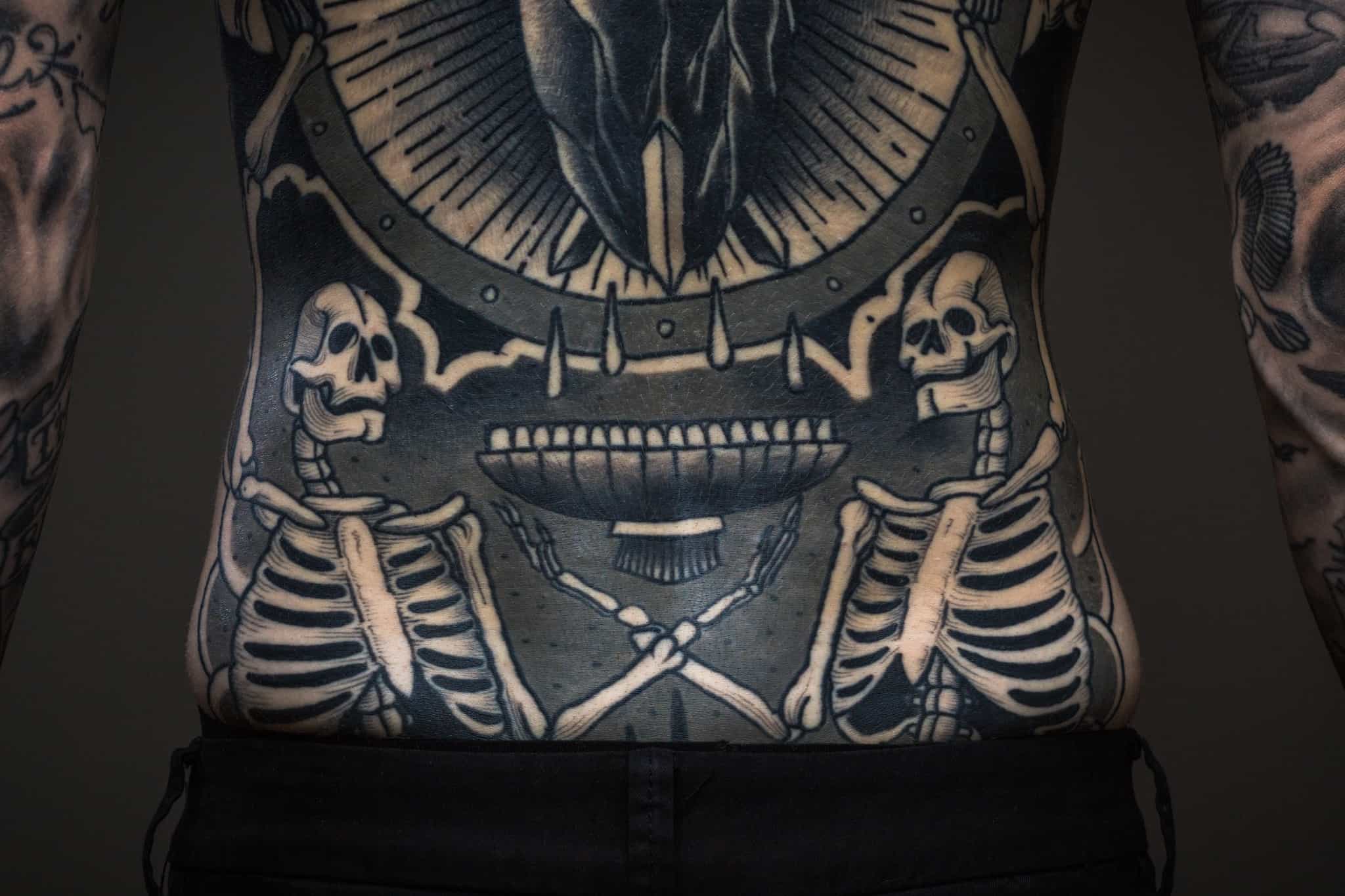 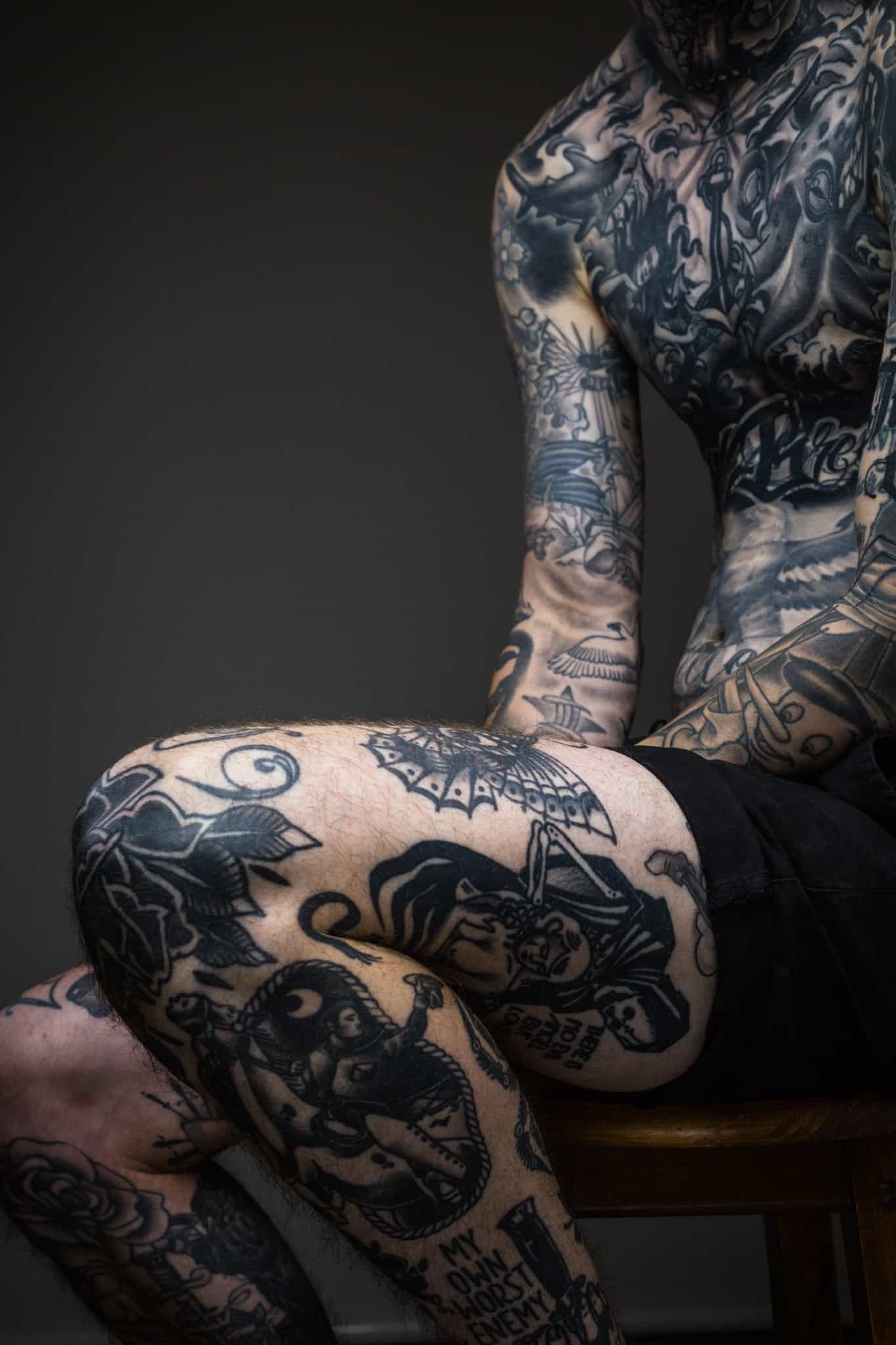 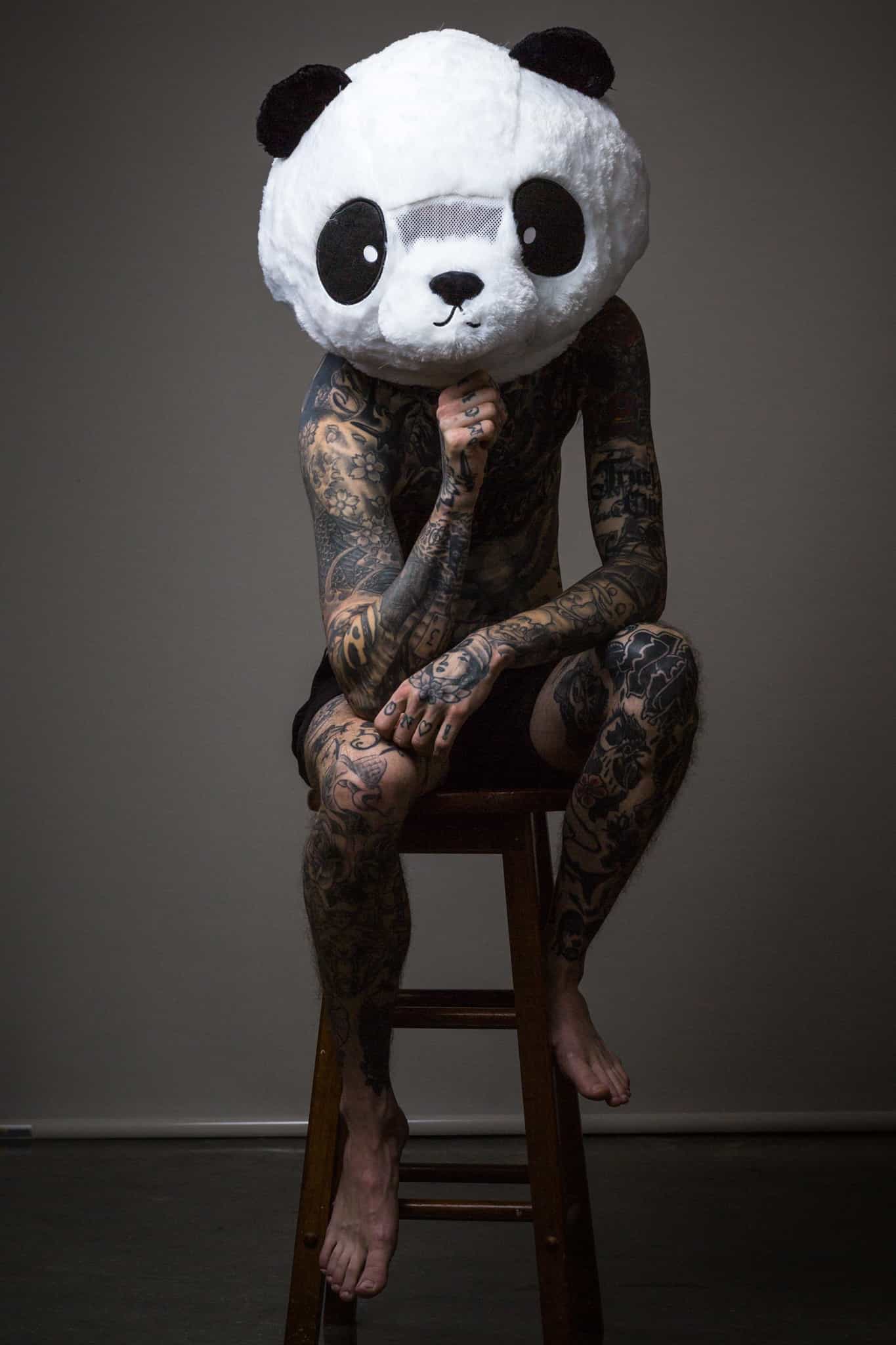 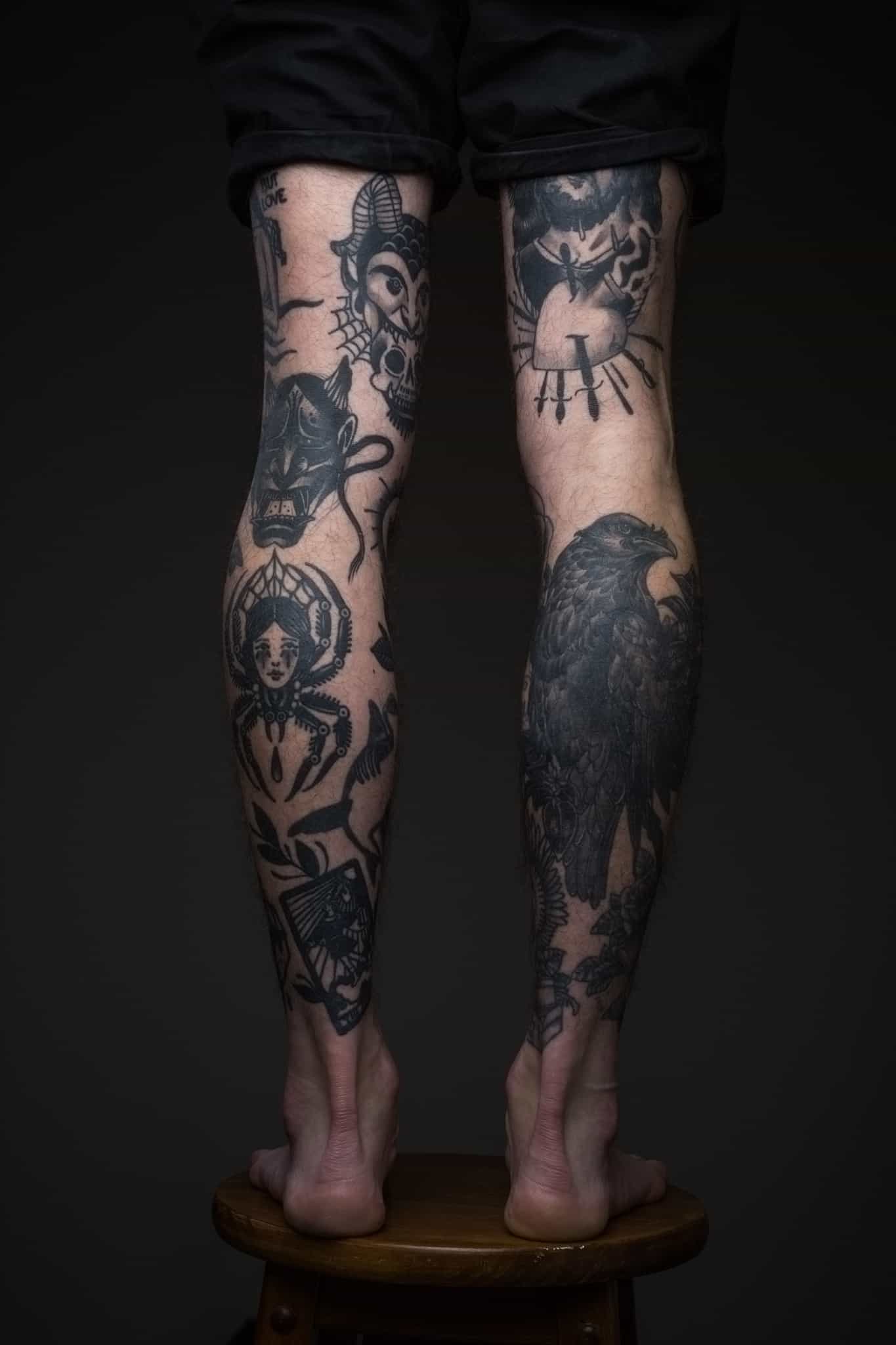 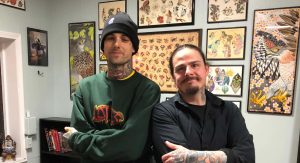 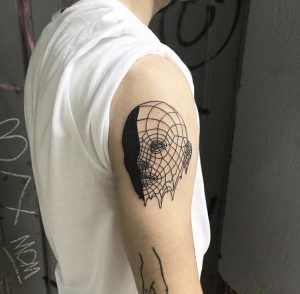