What is your name, birthplace, and year of birth?
Matt Arriola. I was born in Boise Idaho, 1979.

Where did you grow up? Please describe your upbringing and sociocultural background.
I grew up in various small towns in Idaho and the Northwest—moved around a bunch when I was young. As a youth, I had very little culture, being raised where I was and my parents being completely clueless past their tiny corner of the world. My ‘cultural enlightenment’ happened in large part through Thrasher Magazine. I got into skateboarding when I was about six years old and that pretty much opened the door for music, and tattooing later on.

Where do you currently work? Prior to that, where have you worked?
I live and work at Snake River Tattoo in Boise, Idaho. I also spend a good amount of time traveling and working. Prior to that I owned and operated Liberty Tattoo in Seattle, worked at Spotlight Tattoo, and Three Kings Tattoo in Brooklyn.

What inspired you to learn tattooing, and what did you initially learn how to tattoo?
Initially, I was inspired by the bands I liked. They had a lot of tattoos and I thought they looked cool, so I decided to get some at 17—although I already hand a hand-poke that I did on myself when I was 12. Once I started getting them, I was immediately interested in learning how to tattoo. I started out doing the usual stuff—tribal, Celtic, fairies, etc. I learned how to work well under pressure and I learned how to tattoo with a very light or non-existent, half-wiped-off stencil. We used the national transfer pencils, which are extremely easy to wipe off, had no Internet and no Thermo-Fax machine, so if a stencil was going the wrong way you had to flip it and redraw it completely.

Were you trained through a formal apprenticeship? Describe the circumstances of learning.
I had a formal apprenticeship in Boise for about six months with Sean Wyett. He opened the door for me to become a tattooer. Shortly after, I moved to Seattle at the age of 21, with no money and no job. I felt I couldn't get the education I needed in Idaho, and time has proven me right! From there, with much persistence, I was lucky enough to fall in with a bunch of guys and gals that really understood and respected the classic styles of tattooing that I was interested in artistically as well as technically. I picked things up here and there, mostly from the people that worked at liberty. Those people include David Moehrke, Joel Kennedy, Henry Krueger, Jeremy Kimzey, Ian Duca, and Vinse One. I also started traveling early on—I visited Joel Long at Bolder Ink and that changed everything! It took some persistence, but eventually I learned to make needles and ink, so I was only using my own needles and ink in the beginning. I was barely able to afford a bus ride home some days. My wife at the time wanted me to get a real job—thank god I didn't listen to her! Needless to say, that relationship didn't work out.

Did those encounters help as you learned the mechanics of tattooing?
Yes they did. I should have payed more attention, though—especially regarding machine building. I was around some great machine builders but for some reason I never gave it much effort. I was more into the art-end of tattooing, I guess. I started out lining with 3s and hanging the needle way outside the tube of my National Swing-Gate. I also had really small grips, basically just holding the tube. These things helped me develop a lot of strength in my hand and depth control right off the bat. I also learned to perform under pressure. Having no internet and no Thermo-Fax certainly made things hard, but I didn't know the difference.

How did you develop your style? How would you describe it? What are your influences?
I have always been drawn to classic styles of tattooing—Japanese and American primarily. I’ve also drawn the most inspiration from those styles of art. The imagery I appreciate is diverse, from Edo-period woodblock prints to religious and esoteric iconography.

When I was younger, skateboard and poster art made a huge impression and I was way into Garbage Pail Kids. I remember that Prong album, Beg to Differ, with the Pushead cover, and the Misfits, the Red Hot Chili Peppers. I first had Mother’s Milk and then Blood Sugar Sex Magik. I was like 12 or 13. I also listened to Megadeth, etc.

Being around some really great mentors early on was of enormous benefit. I would also buy every book I could, immersing myself in the visual language of tattooing day-in and day-out. If I wasn't drawing or painting or making needles, I was diving into Tattoo Time, Tattooing the Invisible Man, or The Tattooists as well as a variety of other books. I had very little to no computer access the first ten years.

My style is nothing new; it's just solid, classically applied tattoos. You could probably call them traditional? I just call them tattoos.

Is traveling to conventions and other industry events important to you? Which conventions do you usually attend? Do you have any interesting experiences that you can share?
I go through phases with it. I got really burnt out on conventions and traveling for a while, but now I'm enjoying it again. I always do the Bay Area Tattoo Convention. I just did the London Convention as well. Both of those were super fun and lucrative for me. I recently did the first ever Boise Tattoo Convention, organized by Jon Morse. It was awesome! We got some heavy hitters out here and brought something new and exciting, the likes of which Boise has never seen! This year I’m doing the poster for it.

Do you find that the types of clients you tattoo differ based on whether you’re working in your home studio, doing a guest spot, or tattooing at a convention? If so, how?
Other than language barriers when I'm abroad, my clients are all more or less the same and completely awesome wherever I am. I love them all. I am so grateful for everything I have and the clients are what makes that possible. The longer I tattoo and the older I get, the less I take anything for granted.

What do you like about the Bay Area Tattoo Convention specifically? What, in your opinion, is the importance of this event?
Besides bringing the best tattooers in the world together in one place? I like that it is invite-only, so it's the best of the best—not a lot of fillers and nobody bought their way in. I like that it is run by tattooers as opposed to somebody outside of the industry profiting. Sadly, today the former is rarer than you would like to believe in terms of tattoo conventions and products. To sum it up, it is a tattooer’s tattoo convention—meaning no terrible bands, no random ‘tattoo-related’ booths, not 50 different competitions being judged by a Bob and Tom-style MC yelling over the loudspeakers: just real tattooers doing what they do best. I feel really at ease at the Bay Area Convention. If an artist feels at ease at a convention they’re going to do their best work, and I think Bay Area does a great job of creating that kind of environment.

Do you have any hobbies outside of tattooing?
Tattooing and painting are my main hobbies. I also enjoy hiking in the foothills with my dogs, reading, and practicing yoga. I listen to a lot of music and play guitar a little bit. I spend a lot of time with my lady. That's about it, I guess.

Where can we find your work online? What are your handles on social media?
The easiest way to find me is on Instagram, @mattarriola. My shop’s Instagram is @snakerivertattoo. I’m also planning on building a website for Snake River Tattoo in the future.

Are any other forms of media, traditional or digital, important to your work?
I’m kind of not about digital stuff for some reason! I paint, though: watercolor and a bit of acrylic. That’s about it!

What is the main challenge of tattooing today?
For me, personally, it’s the same as it’s always been. I’m always working and trying to take it up a notch, to do the best tattoos I can. I think it’s important to stay centered and focused on that no matter what. Everything else will happens as it will.

Ideally, how would you like to see tattooing evolve? How do you think it will evolve realistically?
Tattooing is a folk art and it probably started out as something other than a means of making money—grandma tattooing people around a campfire or whatever! In that way, I think it’s going to follow the trajectory of the guitar. Right now, how many people do you know that can play guitar? Just about everybody. Yet not everybody is a guitar legend; not everybody can make a living from playing guitar. I think that tattooing is becoming more and more like that. In the future, most people will be able to do some kind of tattooing, but there will be a limited number of people who are able to do it for a living, people who are recognized for it. Not very many people are going to pick up a guitar, a skateboard, or a tattoo machine and put in the time and effort necessary to really make a future from it.

I don’t know if that’s good or bad but I think that’s the way it’s going, with all the information about tattooing being available to everyone. As much as I like the idea of only a certain people having the knowledge and skills to tattoo, the fact is that nobody really can say who can and can’t poke somebody with a needle and make a mark.

I definitely don’t think it’s going to shrink. It won’t peak and then end up something our kids don’t want. That’s because it’s so primal—it’s right up there with the sex and survival instincts. It goes hand in hand with that. I think people are getting more in tune with that kind of stuff now, or at least they’re trying to. And I think that’s more or less a good thing. While it’s hard to watch it happen and there’s bad that comes out of it, overall, I think it’s breaking down boundaries. 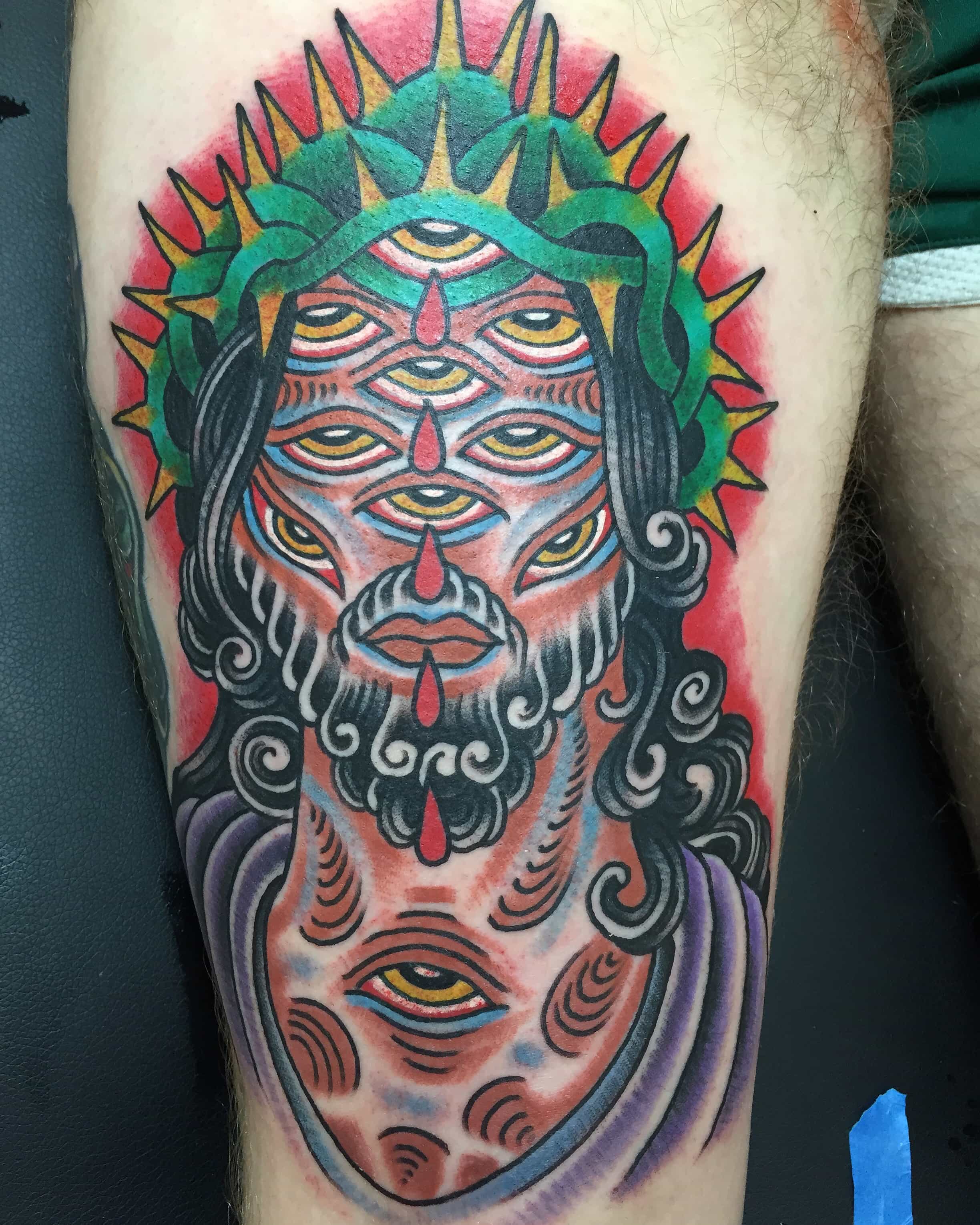 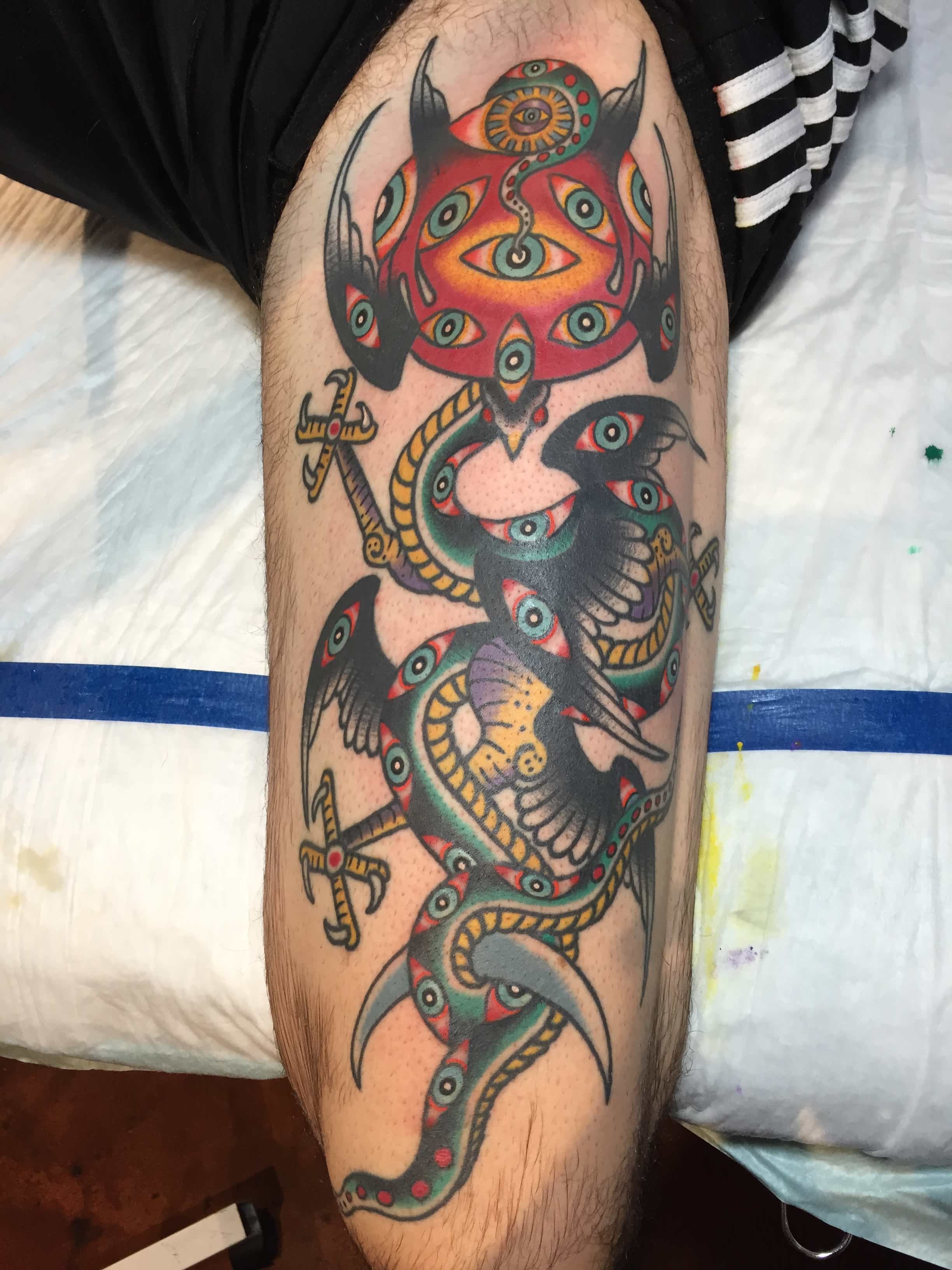 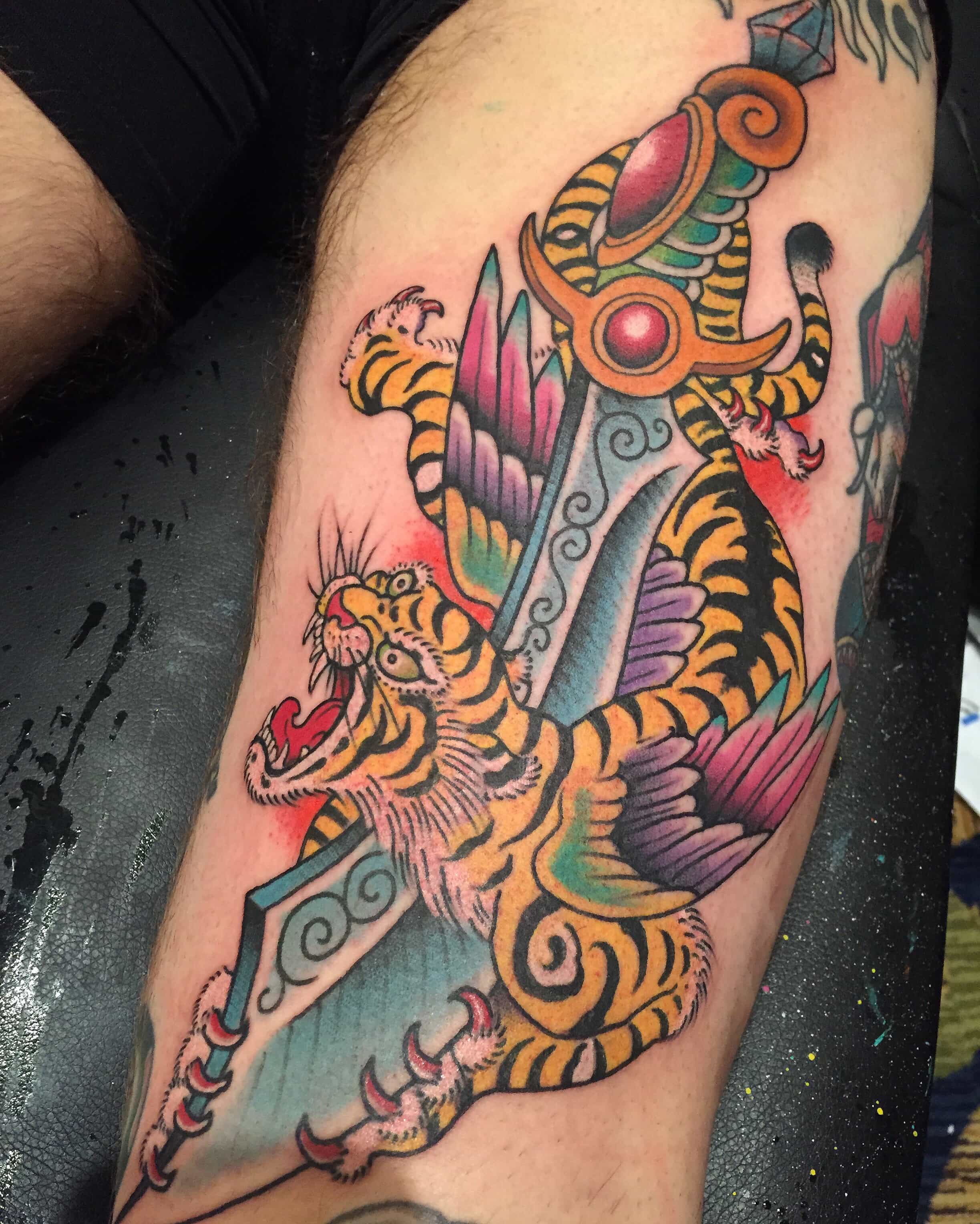 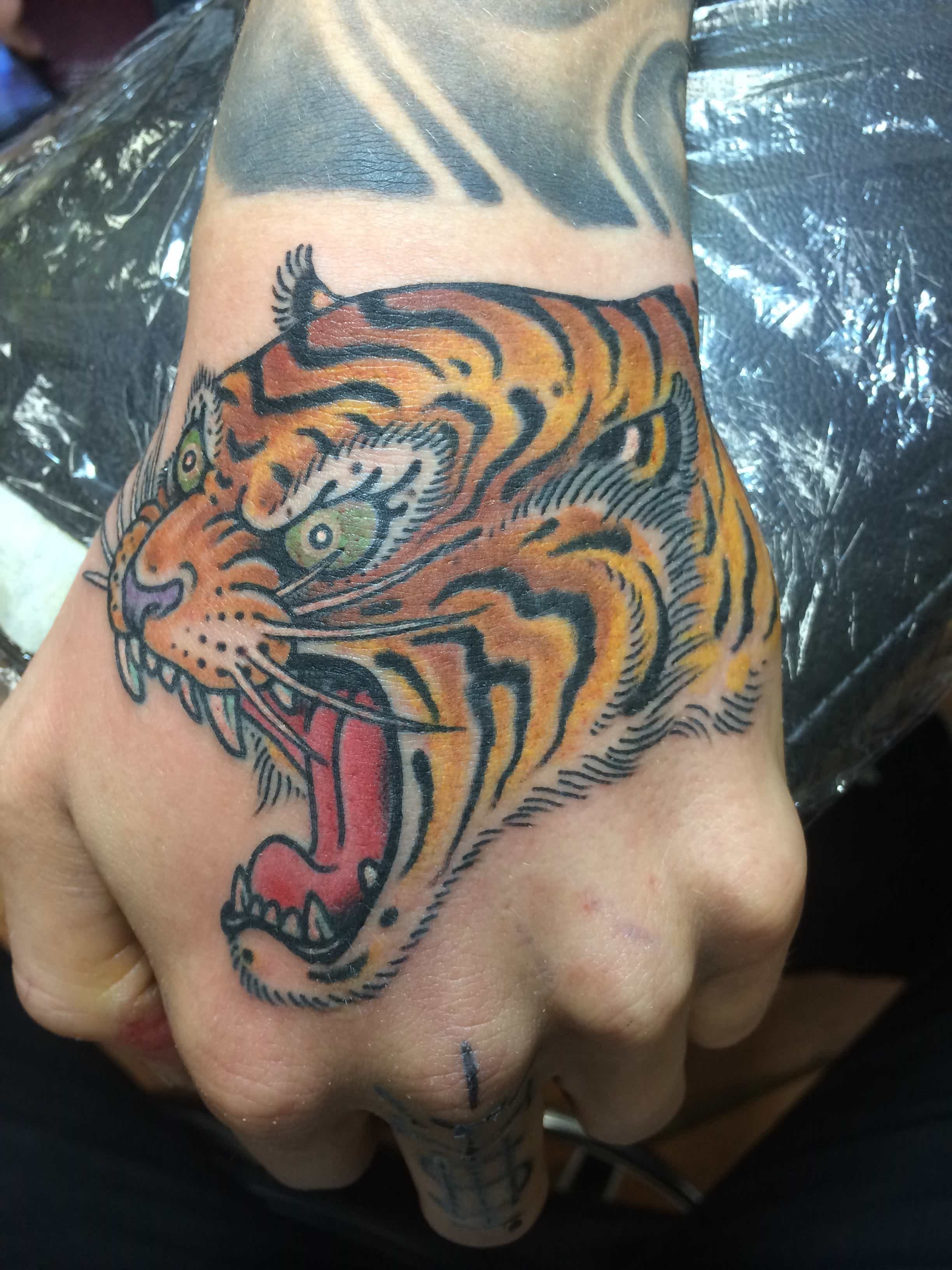 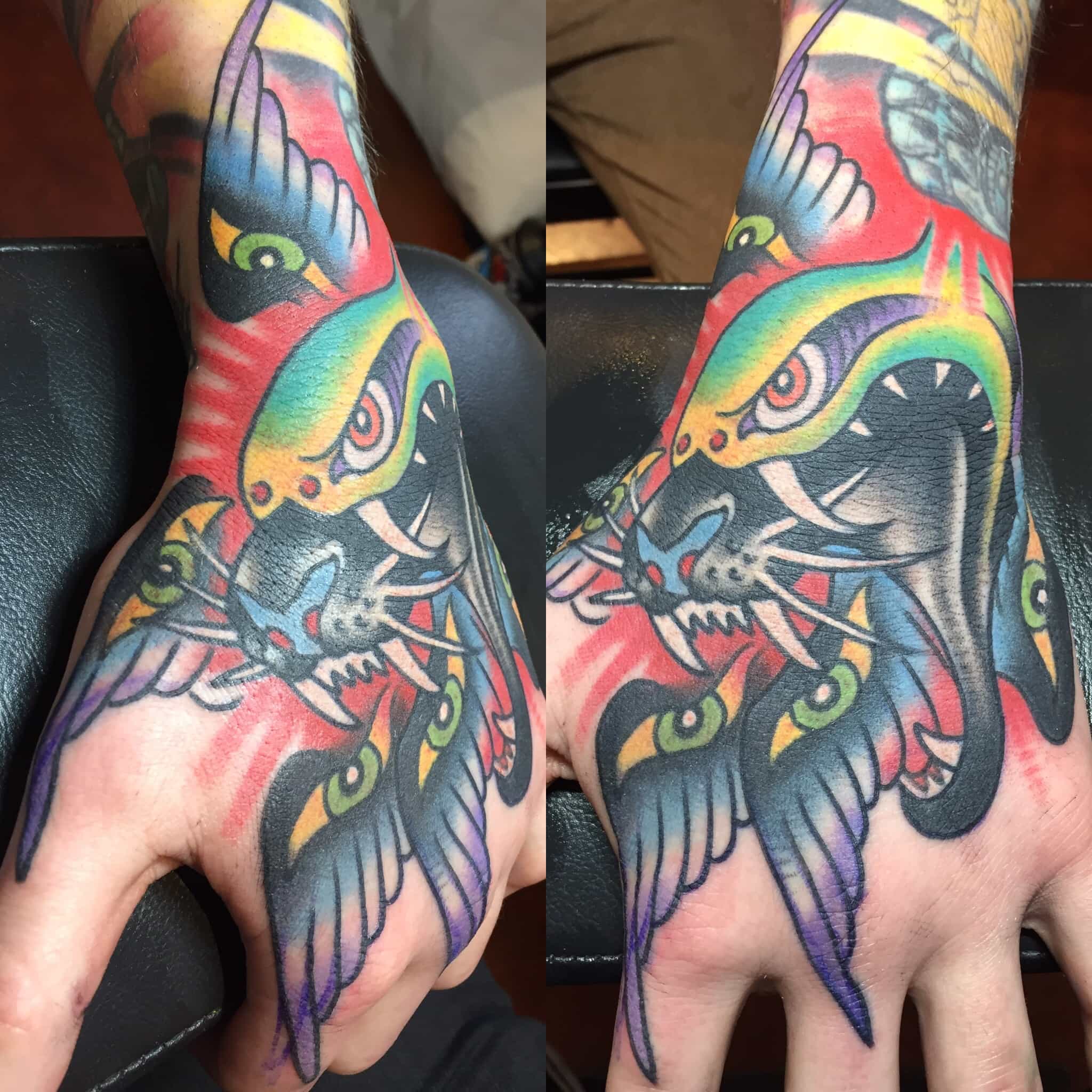 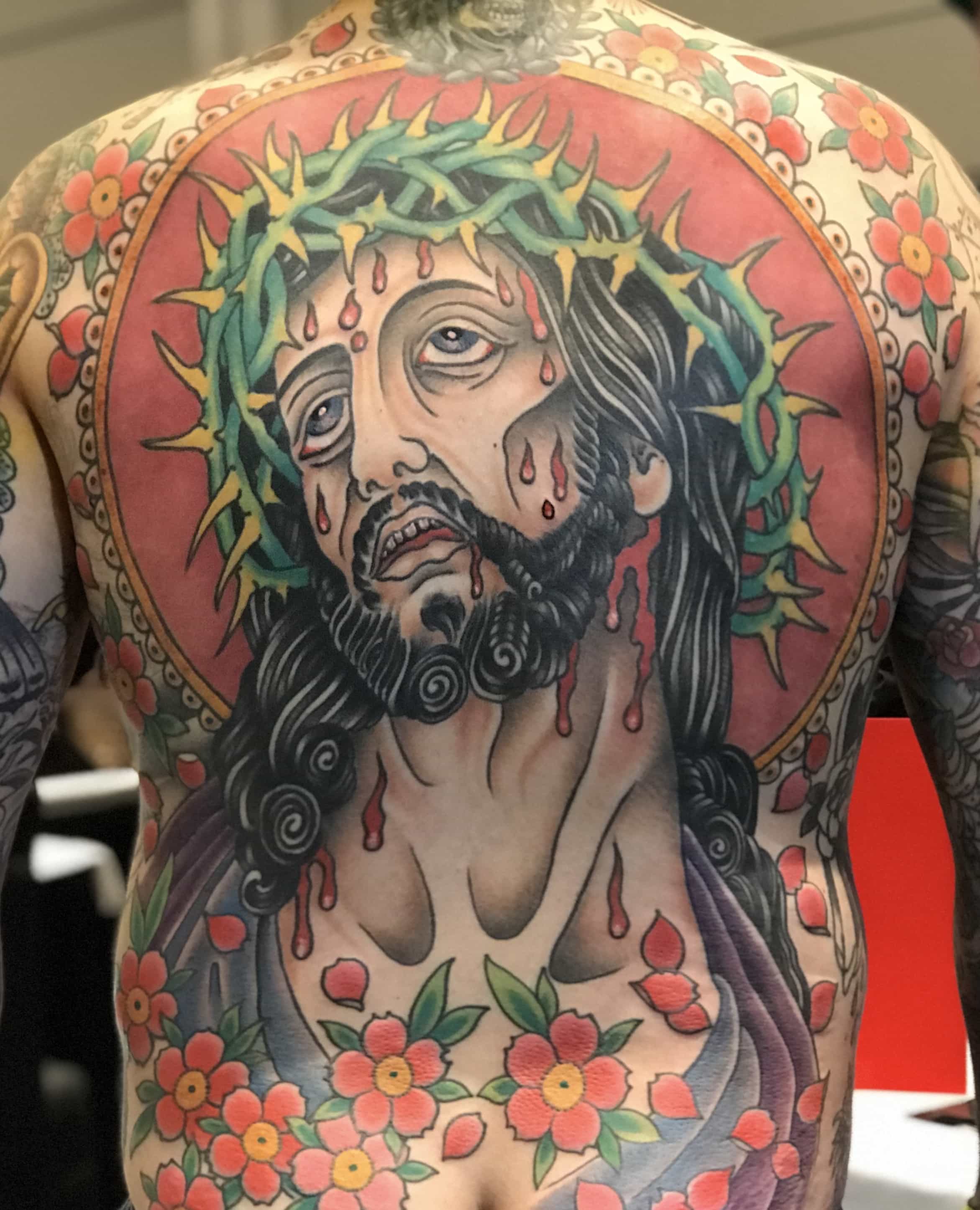 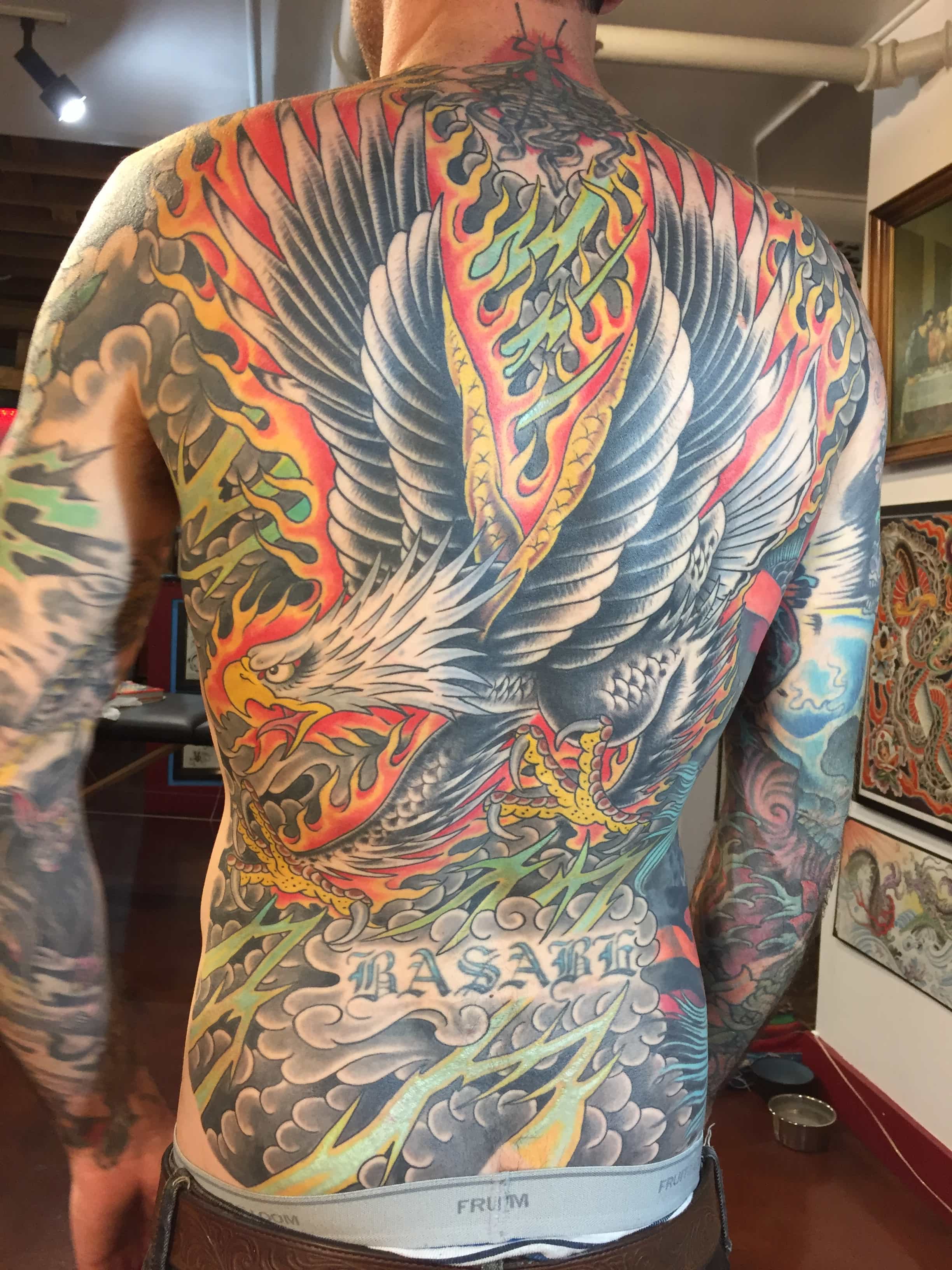 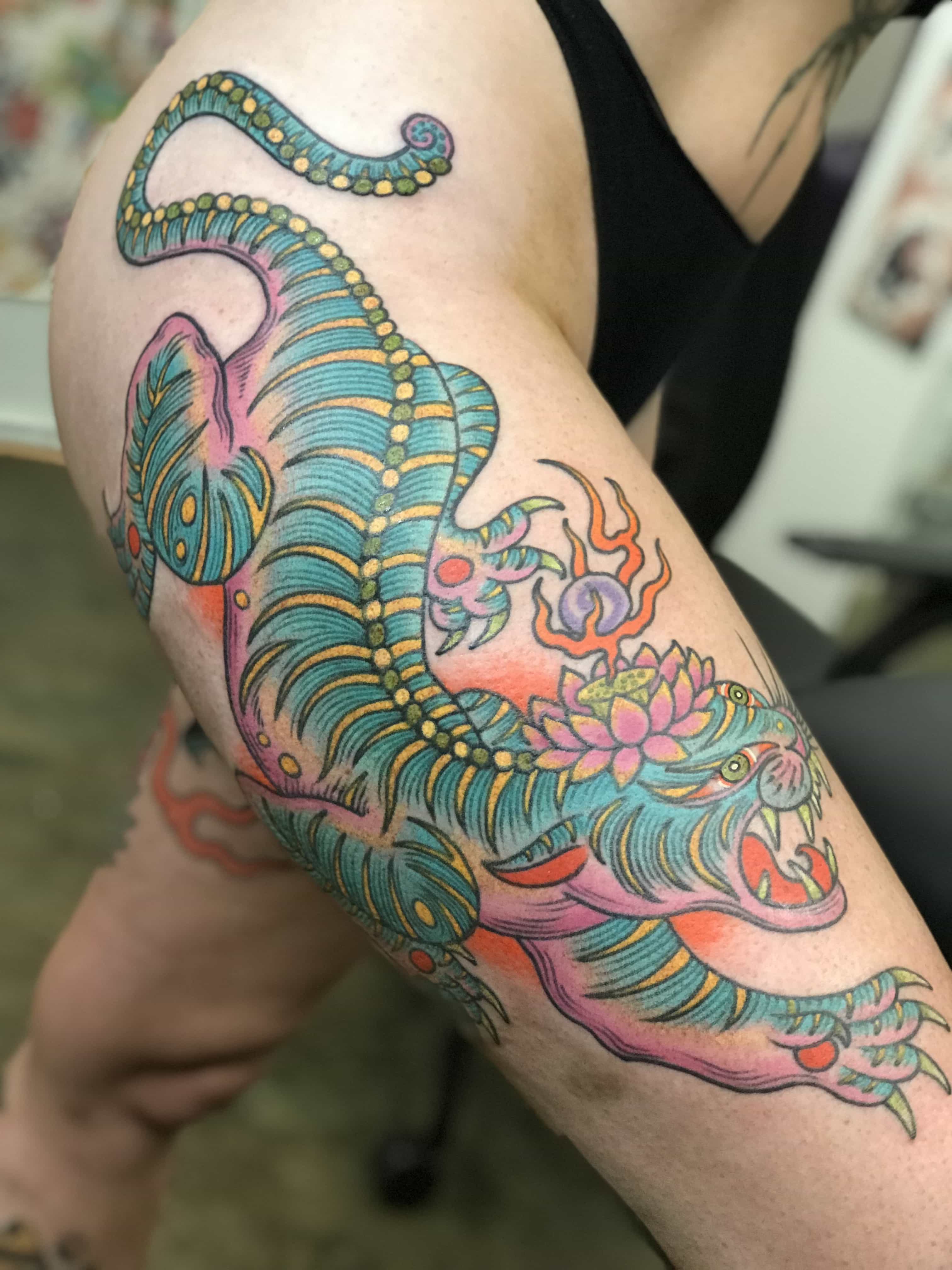 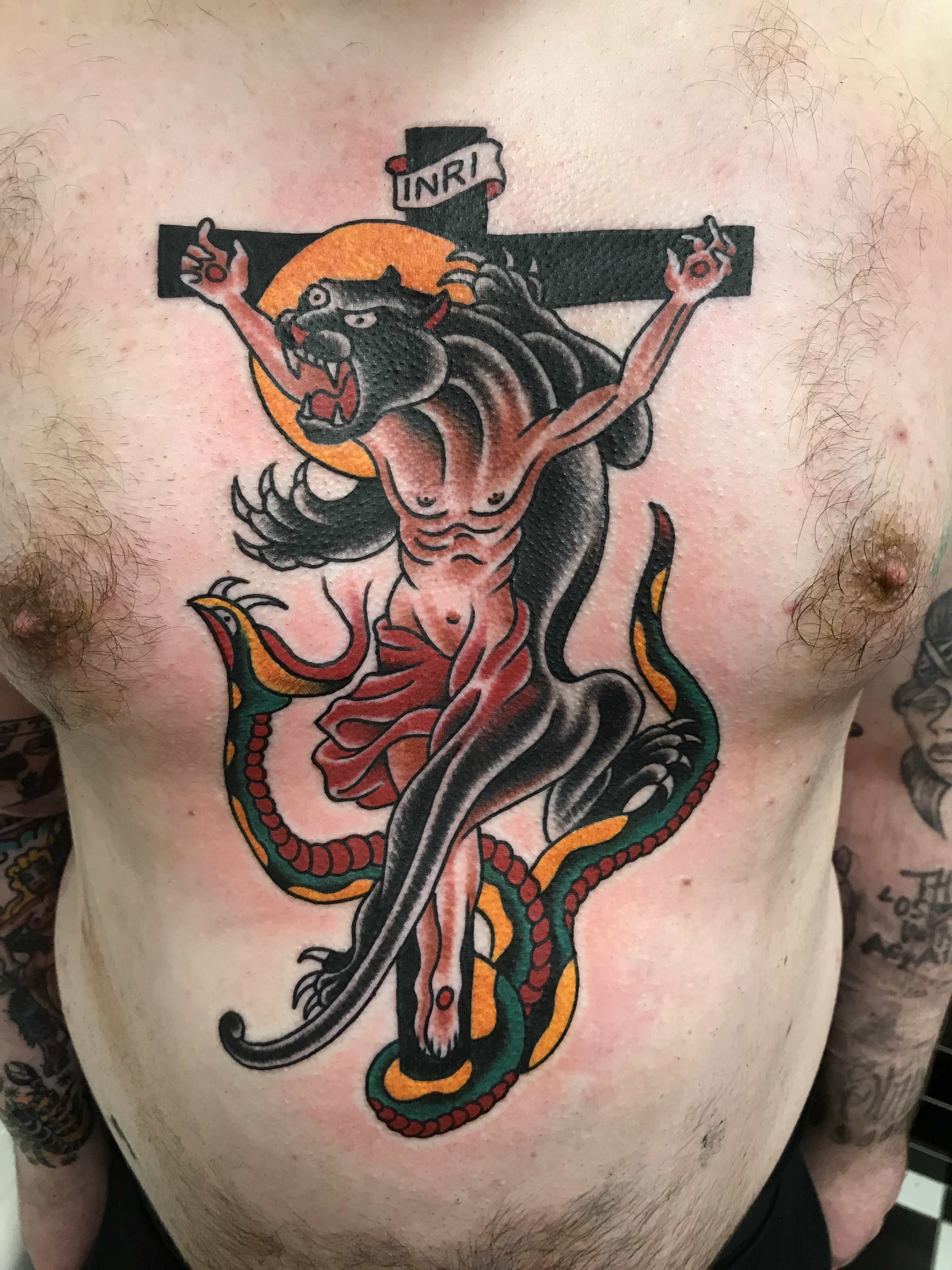 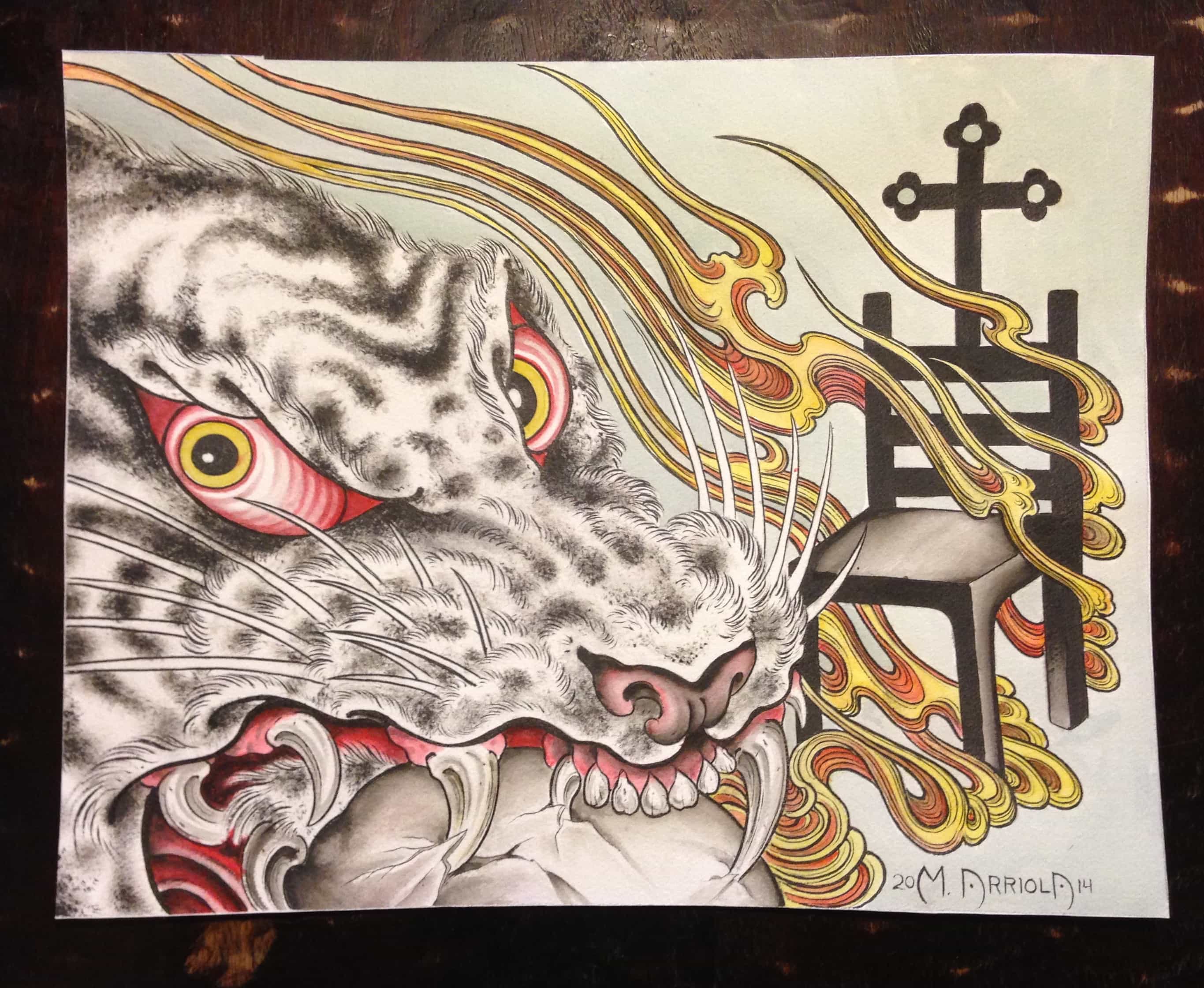 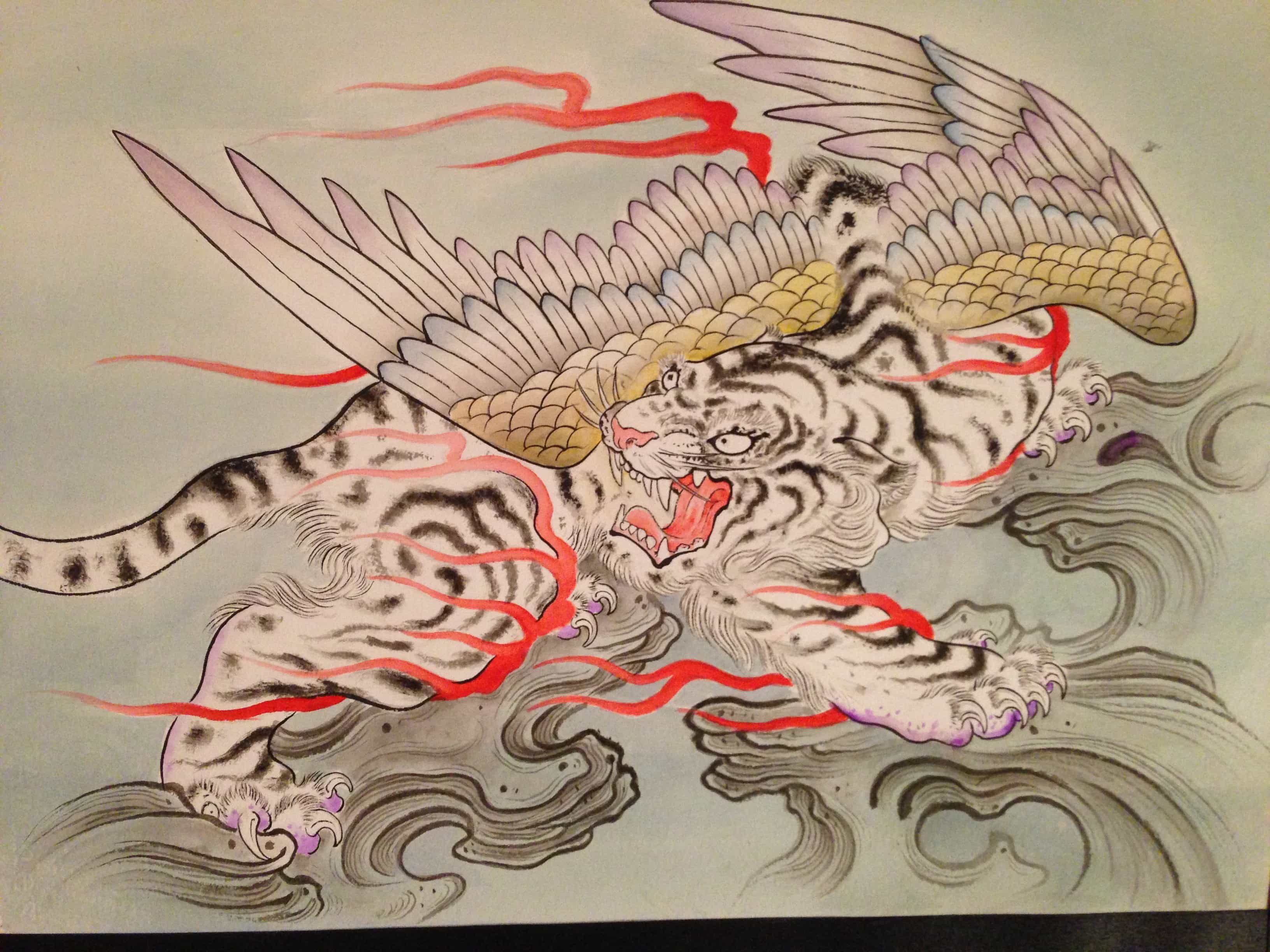 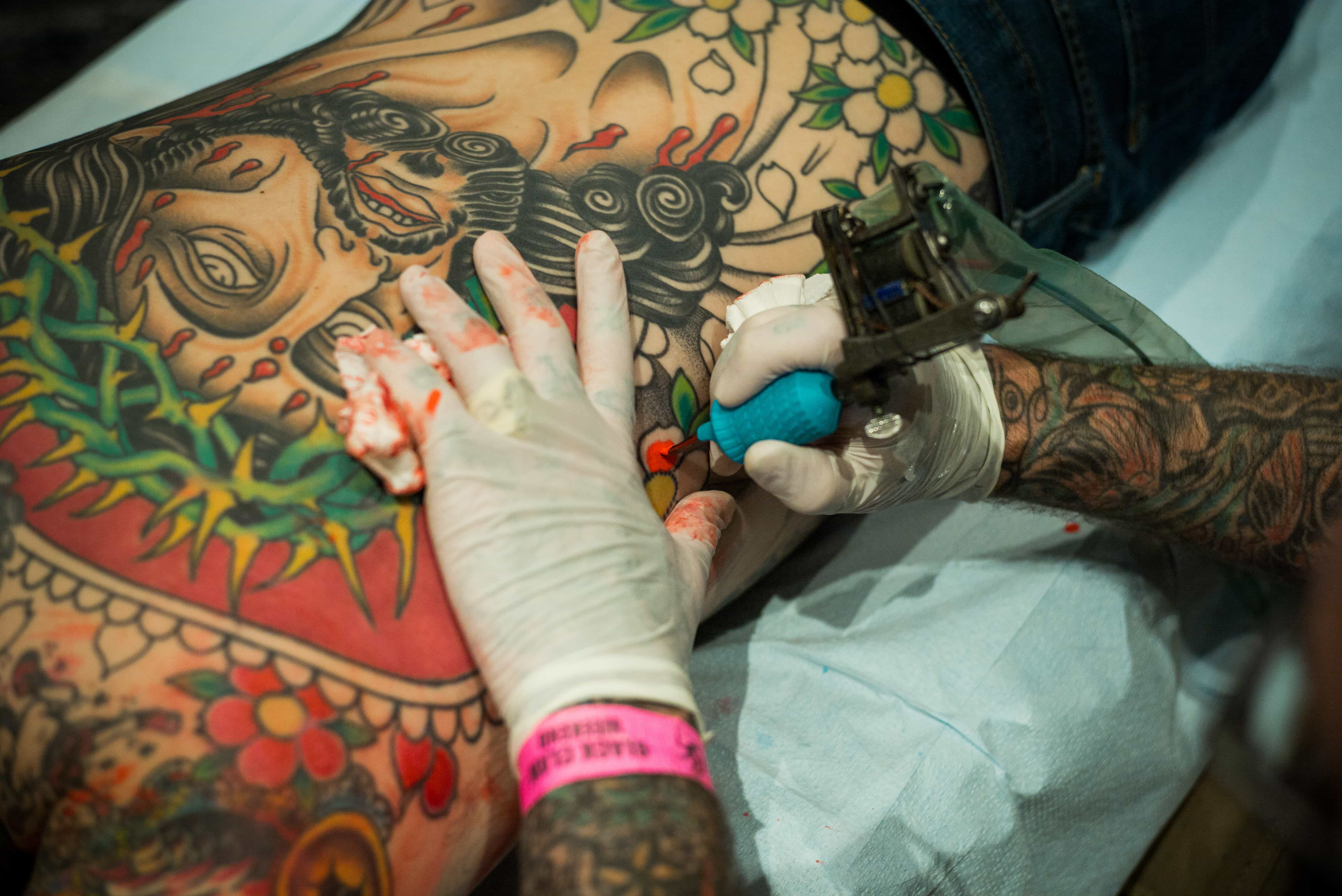 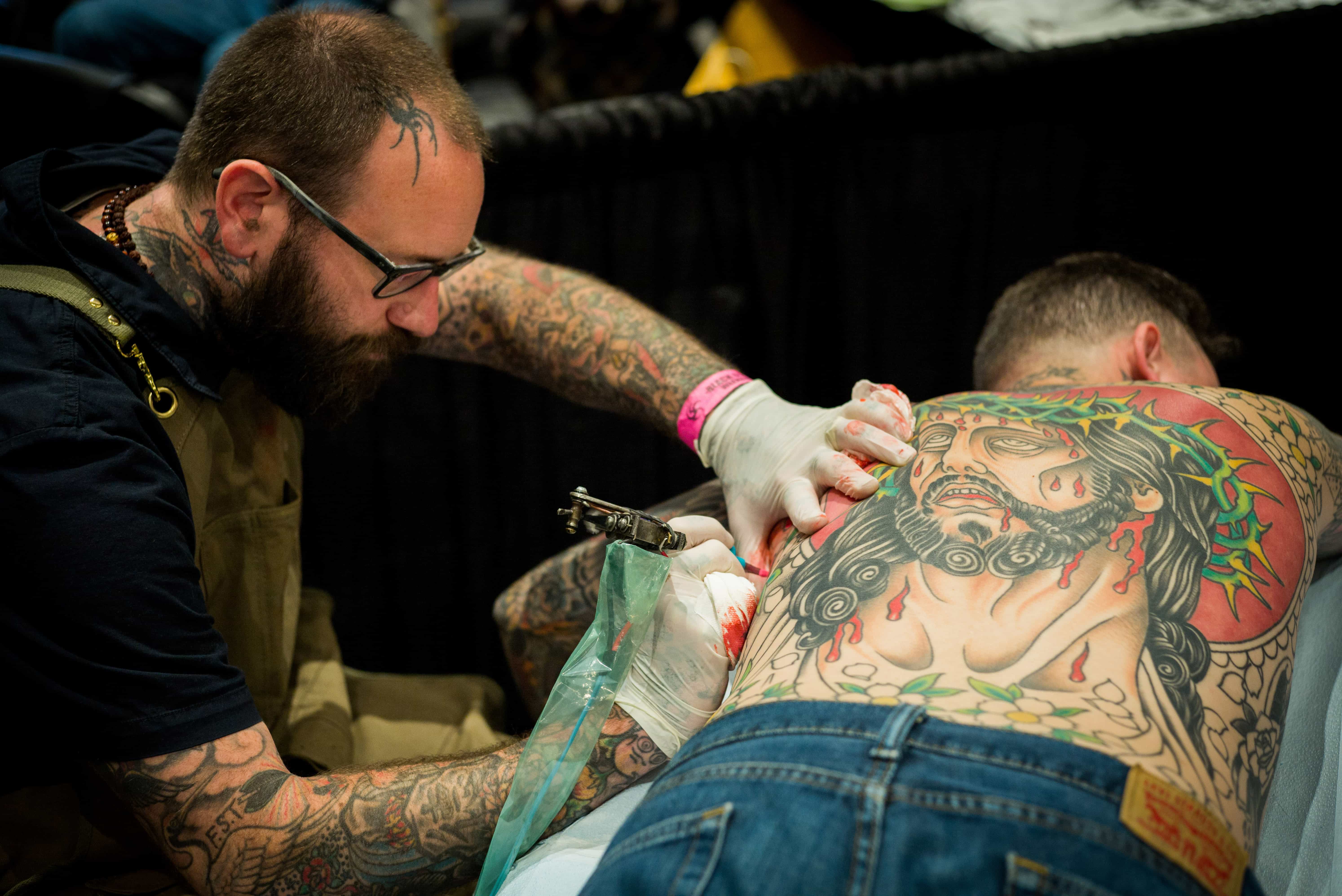 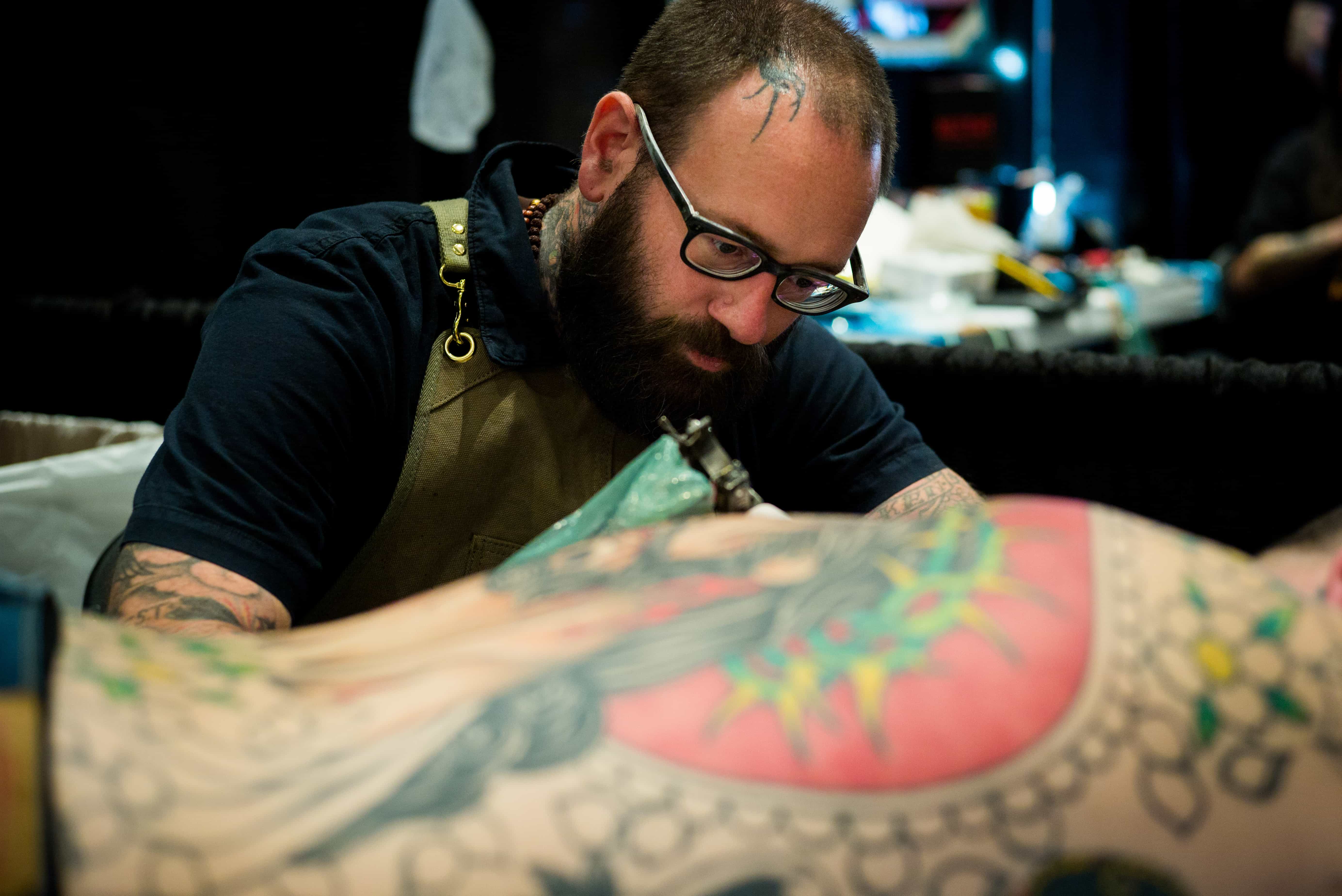 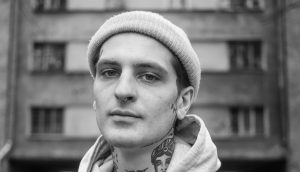 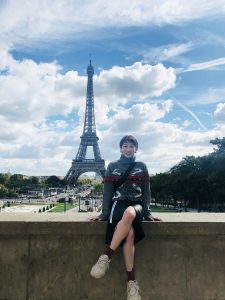 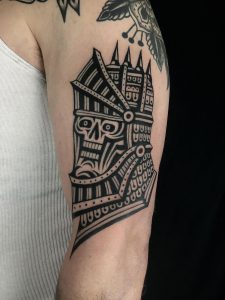